Discover the post-traumatic insanity of this atheist horror 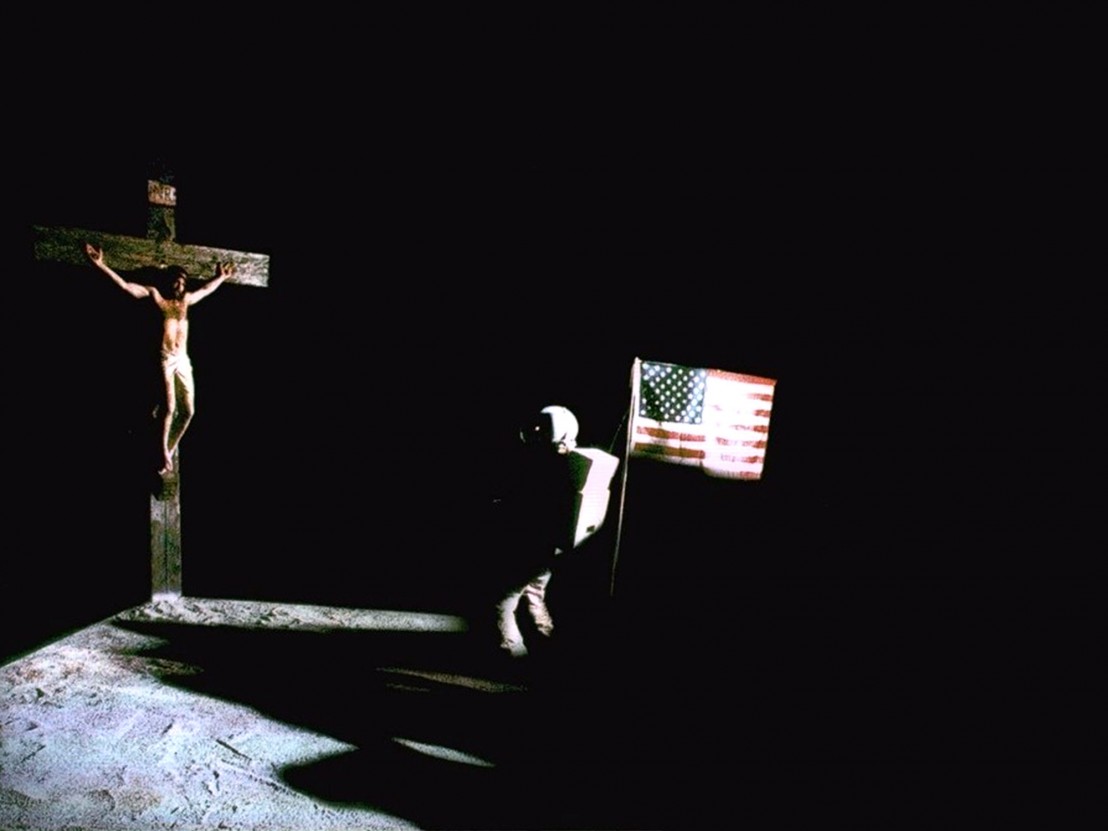 “You’re going to die up there.” In William Friedkin’s The Exorcist, whose script William Peter Blatty has adapted from his own 1971 novel, the possessed 12-year-old Regan (Linda Blair) creepily directs these words at an astronaut in attendance at her actress mother’s house party – and punctuates them by freely urinating all over the carpeted floor.

Regan’s words, evidently, put the fear in their target. For when Blatty turned his 1978 novel ‘The Ninth Configuration’ (itself a rewritten version of his 1966 novel ‘Twinkle, Twinkle, Killer Kane!’) into his directorial debut, it would open with astronaut Captain Billy Cutshaw (Scott Wilson) disrupting a NASA rocket launch mid-countdown. “There’s nothing up there! Nothing!” Cutshaw raves in terror, as he is escorted away from the aborted mission. Just before this, an impossibly outsized moon was seen rising over the Cape Canaveral launchpad, foreshadowing the lunacy (from the Latin for ‘moon’) that dominates the rest of the film.

After his panicked mental breakdown, Cutshaw is now residing in an experimental psychiatric facility, housed in a private castle on loan to the military – the only non-soldier amongst intelligent Vietnam vets suffering varying degrees of combat-induced delirium. Captain Fairbanks (George DiCenzo) claims to have multiple personalities, and keeps trying to pass through walls – when he is not dressed in a habit and exorcising drinks machines. Lieutenant Bennish (Robert Loggia) imagines he is lost in space with aliens. Lieutenant Gomez (Alejandro Rey) paints obsessively. Major Nammak (Moses Gunn) fancies himself a caped African American Superman. And Lieutenant Reno (The Exorcist’s Jason Miller), with the help of his dry-witted assistant Lieutenant Spinell (Joe Spinell), attempts to adapt the complete works of Shakespeare for a cast of stray canines.

It’s Reno who most clearly articulates, via the example of Shakespeare’s ‘Great Dane’, the question of whether the unit’s inmates are genuinely mad, or merely pretending to be mad, or else teetering somewhere in between those two states. The Ninth Configuration also confounds the distinction between staff and inmate. When the unit’s new psychiatrist and commanding officer Colonel Kane (Stacy Keach) first arrives at the castle, he is greeted by the ‘medical officer’ Frome (Blatty in a cameo), who quickly turns out to be a deluded patient in disguise.

The ‘real’ medical officer – whose doctor’s uniform Frome has stolen – is Colonel Fell (Ed Flanders), although that is not his real name or identity. Fell’s mental stability too is somewhat questionable, as he walks around in a trouser-less state, expresses compulsive anxieties about getting his clothing wrinkled, and even at one point is seen, Hamlet-like, addressing a human skull on his desk. And several of the inmates make explicit their doubts about the sanity even of their new CO. “I’m telling you, he’s Gregory Peck in Spellbound,” Reno insists of Kane. “He comes to take over the mental asylum and he’s nuts himself.”

Marked by a wide-eyed intensity, and given to vividly disturbing nightmares that – through a bizarre kind of dissociation – he claims are not his own, Kane certainly seems less than stable, and many viewers will be quick to share Reno’s suspicions that they are witnessing a lunatics-taking-over-the-asylum scenario akin to the one found in Hitchcock’s Spellbound or Martin Scorsese’s Shutter Island. Still, Kane’s presence in the unit – his dedication to the patients, his indulgent methods – all begin to have a positive effect on the other men.

Like the Gothic castle (festooned with gargoyles, crucifixes and posters of Bela Lugosi) in which The Ninth Configuration is predominantly set, Blatty’s film is something of a grand folly. By turns uproariously funny and deadly serious, it offers multiple, disorienting insiders’ views of insanity, breaking through the walls that divide rationality and madness and building up a surreal structure which constantly confuses our sense of what is concrete and what mere empty delusion. As these different men work through very real problems via therapeutic role play and manic masquerading, the film too uses its fictive frame to examine, with both great wit and unsettling gravity, the stresses and traumas of the Vietnam War.

Yet it is when the film starts to focus on Kane’s treatment of the unit’s only non-combatant, Cutshaw, and on the question of why this astronaut refuses to go to the moon, that The Ninth Configuration allies itself most closely to the Catholic concerns of The Exorcist. For much as Kane is a conflicted Christian desperately searching for redemption, Cutshaw has fallen victim to a crisis more spiritual than mental – a sort of atheistic horror – and requires an example of genuinely altruistic self-sacrifice to renew his faith that maybe there may be something up there after all.

We are all going to die, whether down here on Earth or up in the heavens – but after grappling with original sin and the problem of evil, Blatty also poses questions about what happens after death, and whether we truly live in an indifferent, unforgiving universe. In the end, the answer that he gives is as irrational as it is optimistic, pulling triumph from tragedy and finding a paradoxical spot where faith and folly enter a parallel orbit. All of which makes for one crazy film, struggling to have its multiple personalities and contradictory ambitions meaningfully coexist under the one turreted roof. That struggle is both The Ninth Configuration’s appeal and its message.

The Ninth Configuration is released both on DVD and Blu-ray on 25 April courtesy of Second Sight.