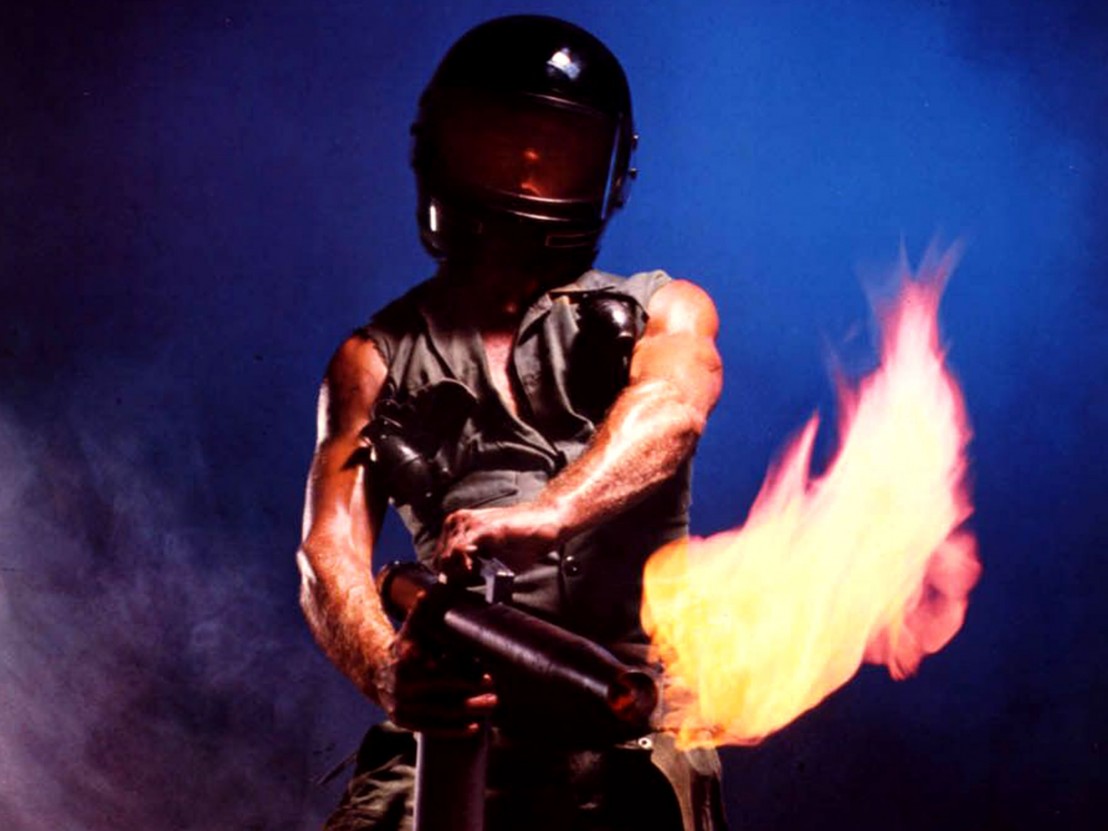 We’ve reached the point now where anything and everything from the 1980s seems to be getting a loving re-release. Take for example the vigilante shocker from 1984, Exterminator 2, which is being issued next month by 101 Films (the Blu-ray of The Exterminator arrived in 2011 courtesy of Arrow Films). Those Exterminator films have a special place in my heart, even though I didn’t get around to watching them until fairly recently.

Like any movie buff of a certain age, I have fond, hazy memories of wandering around video stores as a kid, gazing at all the seductive covers of films I wasn’t allowed to rent. There are entire books and documentaries dedicated to the world of VHS cover art, but The Exterminator was the one that I’ll never forget. It terrified me. The horror film covers didn’t bother me. I knew that ghouls and vampires didn’t really exist. But The Exterminator cover featured a photograph of a real person – of a man dressed all in black, a motorcycle helmet obscuring his face, holding a gigantic flamethrower. It seemed dangerously real.

This realism was intentional, and would surely have been a selling point back in the day. The Exterminator films are vigilante tales of a particular style — violent, reactionary and right wing, they aped the popular Death Wish series but originated in the late ’60s in the form of Don Pendelton’s trashy paperbacks. They speak of heroes who think the modern world has gone to shit at the hands of bleeding heart liberals, and the only cure for criminals is a cold bullet. In this instance, The Exterminator (played by Troy McClure-a-like Robert Ginty) is John Eastland, a ’Nam vet who returns home to New York to find it over-run with rapists and stick-up kids and decides to start going around killing them. Because every man needs a hobby.

I had always assumed that The Exterminator was the bad guy, not the hero. Even so, I understood exactly the fear it was trying to sell. There’s a certain type of terror you experience as a kid that stems not from scary movies or TV shows, but from being exposed to snippets of the real-world evil you are too young to understand. I remember catching glimpses of news reports about the IRA and being frozen with fear. I was too young to appreciate the motivations of murderers or terrorists. I reasoned that evil men simply came and killed you in your sleep. I would go to bed thinking that a guy wearing a black motorcycle helmet was going to burst into my room in the middle of the night and start torching the place.

So what is it like to finally watch these films as an adult? Well, it turns out the terrifying images of my childhood stack up pretty well with the first film. It’s one of those typical exploitation-era New York movies: sleazy, shot entirely on location, capturing the hellish cesspool that existed before Major Giuliani came in and cleaned up the streets. There’s no real plot to speak of, just the Exterminator taking out the trash in an array of disturbing and merciless ways. Apart from a memorably violent opening sequence in Vietnam, it’s essentially just another fear-mongering urban vigilante flick. And it’s pretty entertaining.

The sequel, though, is a hell of a lot more fun. It was produced by Cannon Films, and much like the Death Wish series, plays out like one long, bloody cartoon. The Exterminator now has a girlfriend, and a Punisher-style tricked-out battle van. He also uses his flamethrower this time. Instead of nondescript hoodlums, the villain is now Mario Van Peebles hamming it up as sort of street thug cult leader. There’s a catchy synth score, and because this is a Cannon Film from 1984, a good portion of the runtime is dedicated to breakdancing scenes. It’s a long way from the nightmarish vision I imagined as a kid, but if I’d seen it when I was nine, I’m pretty sure I would have loved it just the same.

What VHS covers gave you chills as a kid? And did you ever finally face up to those fears? Let us know @LWLies

The Exterminator 2 Blu-ray will be available from 5 September via 101-films-store.myshopify.com