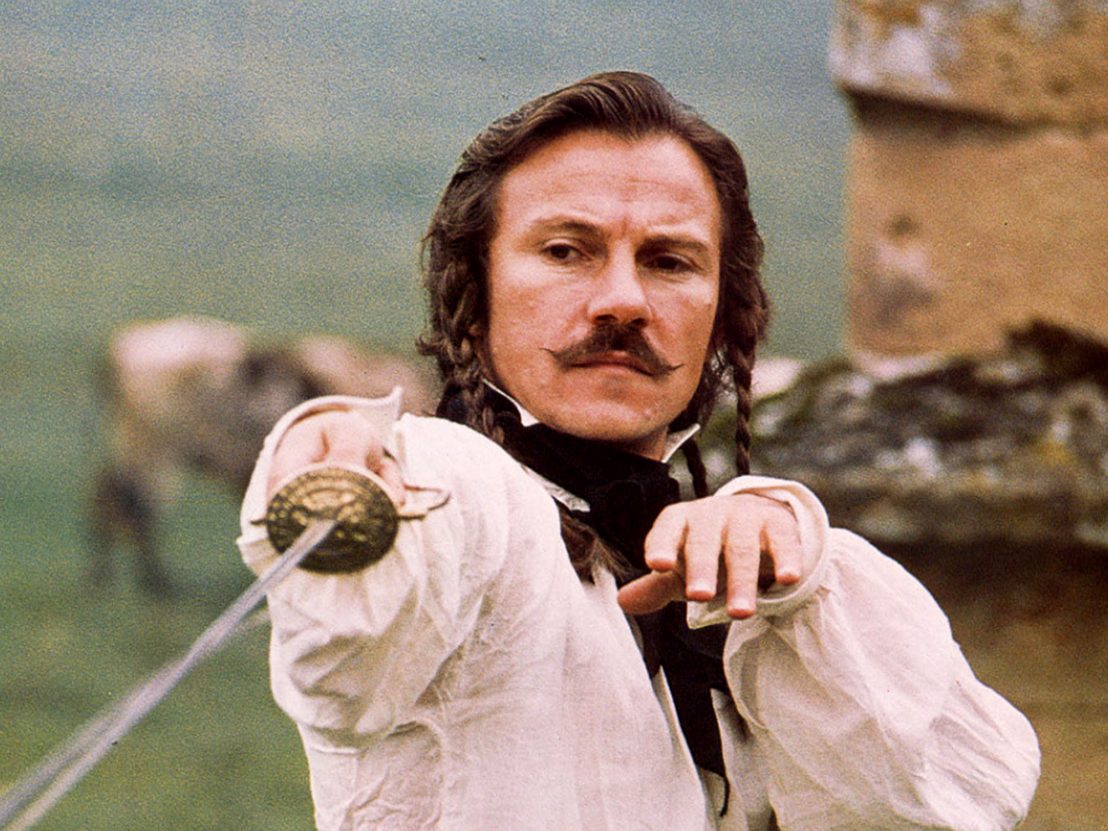 In a certain kind of film, the duel concentrates the bigger dramatic stakes at play. There’s no question that the duel has a place in several of Ridley Scott’s movies, which is why, on the occasion of The Duellist’s 40th anniversary, we’re reflecting on the director’s interest in swordplay and the ‘tradition’ of the sword.

Scott’s debut feature is an adaptation of Joseph Conrad’s short story ‘The Duel’. Scott’s thematic affinity for Conrad’s work registers in a number of his films, most notably wherever the drama turns on the collision of honour and dishonour.

The two major influences on the visual style of The Duellists were Stanley Kubrick’s Barry Lyndon and the French baroque painter Georges de La Tour, whose images offer a clue as to how best to treat light and shadow. The film’s penultimate image is a wide shot showing one of the soldiers looking out across a river. It’s a beautifully composed, painterly image enhanced by the film’s melancholy musical score.

The Barry Lyndon influence is evident not only in the framing but also in the way a number of scenes begin, almost as still-life close ups of fruit and food. Contrasting the static and serene images of landscapes and interiors that are threaded throughout the film, Scott employs handheld shots for the duels, investing each fight scene with energy and a sense of uncertainty. This method of capturing the chaos of one-on-one combat is one Scott has returned to again and again over the course of his career.

The film charts the duelling history of two soldiers, d’Hubert (Keith Carradine) and Feraud (Harvey Keitel), over several decades – imagine a kind of sombre variation on a Tom and Jerry cartoon. In keeping with the idea of the civil and the wild that unfolds across The Duellists, one of d’Hubert’s soldier friends says of Feraud, “He’ll hunt you out in the end.”

Even the way that Feraud holds his free hand during the first duel suggests a claw primed to maul its prey. Feraud taunts d’Hubert in the same way that Roy Batty taunts Rick Deckard in Blade Runner and Darkness taunts Tom Cruise’s Jack in Legend. In Legend, it’s a duel that brings the action to an elemental kind of conclusion, with Tim Curry’s Darkness the embodiment of corruption and Jack the essence of everything that is pure and good.

The Duellists also sets the tone for all of Scott’s subsequent historical films. For instance, you’d never mistake Scott’s take on Robin Hood for the Errol Flynn-starring version of the legend. And in Kingdom of Heaven there is a scene in which the ageing Godfrey bestows young Balian with his knighthood. As this brief scene unfolds the score delicately fuses European and Middle Eastern sounds, as Godfrey instructs Balian to, “Defend the King.” He then instructs, “If the King is no more, protect the people.” This emphasis on duty, honour and protecting ‘the people’ chimes with a scene in Gladiator where Maximus and his fellow slave-fighters prepare to take on whatever is unleashed upon them.

In The Duellists, d’Hubert and Feraud are men of action and honour but the former is a man of intellect, too, and he struggles to reconcile the personal and the professional. There is a lot at stake when d’Hubert fights one last time: there is a family to live for, just as Maximus has a family to live for and, eventually, avenge.

In Gladiator, Maximus’ philosophy is one of unity in the arena, recognising that honour lies not in focusing on our differences, and a self-centred individualism, but in the things that bind us together: “Whatever comes out of the gates – we’ve got a better chance of survival if we work together. If we stay together we survive.”