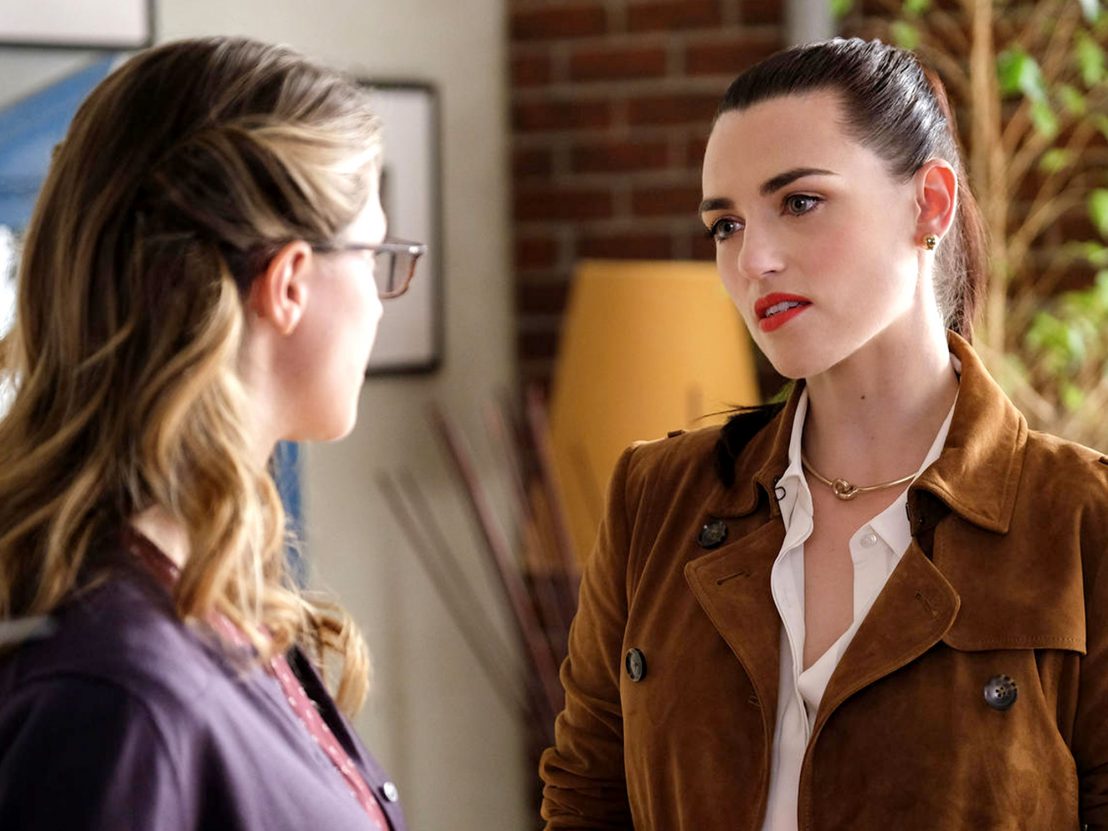 At San Diego Comic-Con last weekend, the cast of Supergirl were asked, just as they were last year, to provide a recap of the show’s most recent series. A simple enough request, but partway through Jeremy Jordan (who plays Winslow “Winn” Schott Jr) began proclaiming that two characters from the show, Kara Danvers and Lena Luthor (played by Melissa Benoist and Katie McGrath), are “only friends, they’re not gonna get together, they’re only friends.” Jordan almost shouted this into his mic before the rest of the cast joined in, laughing and dancing at their co-star’s sudden attempt to invalidate the show’s LGBTQ+ fans. Benoist even remarked “that’s pretty brave” when Jordan later said that he “debunked Supercorp”.

Kara/Lena aka Supercorp, as the f/f ship has been dubbed, is a popular pairing within Supergirl’s legion of fans, particularly among young LGBTQ+ women. It’s ‘fanon’, in the sense that it’s not official and doesn’t occur within the show but is supported by fans – who didn’t seem to mind it that way, quietly creating fan art and fan fiction for the pairing in their own time, while still engaging with the show.

So things stayed relatively quiet. That is, until Jordan’s ill-considered Comic-Con comments. No one even brought up Kara/Lena before the recap, and so fans are both bewildered and hurt by the cast’s actions. While it may seem like harmless fun, it’s far from it for Supergirl’s many LGBTQ+ fans. As Katie McGrath so eloquently puts after the recap, “the great thing about what we do is like any art, anybody can read into it what they want and take from it. So you can see anything and take from it what you like. And if that’s what you see in it, take it away.”

It’s still rare to find LGBTQ+ representation in the mainstream media – so much so that LGBTQ+ audiences are often forced to look for interpretations wherever they find subtext. Actors, writers, and producers involved in these shows, and any media, should not invalidate what is seen and interpreted within their art, particularly if it’s not harming anyone, and especially if those interpreting their creations are just a dedicated and passionate portion of their audience. Nothing more than a group of marginalised people, so badly wanting to see themselves and their experiences represented on screen.

A conversation around this is needed as there is still so little LGBTQ+ representation in the media that fans are forced to often find it for themselves. Many have argued that since Supergirl has another canon lesbian couple already, in Alex Danvers and Maggie Sawyer (or Sanvers) that it isn’t needed – but representation isn’t a one size fits all issue, and there needn’t be only one LGBTQ+ couple (or indeed only one or two canon LGBTQ+ characters) on a show, as if they’re simply trying to fulfil some kind of quota.

At the time of writing, Jeremy Jordan has issued two apologies to fans on his Instagram, first apologising to anyone who took a “silly joke about Kara and Lena being just friends” the “wrong way”. (Many had the same thought – what’s the right way the ‘joke’ could be taken?) However, he later issued another apology, and promising to “be better” and openly engaging with fans on the matter on his Twitter, proving that he is trying to better himself and that he did seem to have just genuinely made a (hurtful) mistake.

Mehcad Brooks (who plays James Olsen on the show) has also commented, writing on his Instagram page, “I can assure you, no one in our cast makes fun of the LGBTQ+ fans… you’re only fighting your allies. W E A R E O N Y O U R S I D E.” Even though when they saw that clip, many fans of Supergirl, and LGBTQ+ people, can attest that they felt the cast was far from on their side, given the fact that they were openly laughing at them.

McGrath gave the short speech quoted above directly after the recap, as well as a short and eloquent answer to a question a few days after the event, on why fans seem to like Kara and Lena’s relationship, saying that fans are drawn to their relationship because, “it doesn’t matter who people think you are, it’s who you are. You’re your own person despite other people’s perceptions,” something which fans have appreciated.

The rest of the cast, including Benoist and Wood (who play Kara Danvers/Supergirl and her current love interest, Mon-El) have stayed silent, which only serves to drive home the idea that they don’t really seem to care about their LGBTQ+ fans. Everyone makes mistakes, but when they’re made, a genuine, heartfelt apology and an attempt to move forward and be better is the minimum of what should be expected, especially when people have been so affected.

If this episode has revealed anything, it’s that LGBTQ+ representation is still incredibly important to talk about, and there’s still a long way to go in terms of making lasting improvements. It’s clear from how the Supergirl cast has acted that far more needs to be done to improve LGBTQ+ representation in the media – but also attitudes towards both LGBTQ+ representation and particularly LGBTQ+ fans who exist within fandoms. Because no fan should fear being so brazenly invalidated by casts and people that they respect, especially when they have been so supportive of something they identify with.