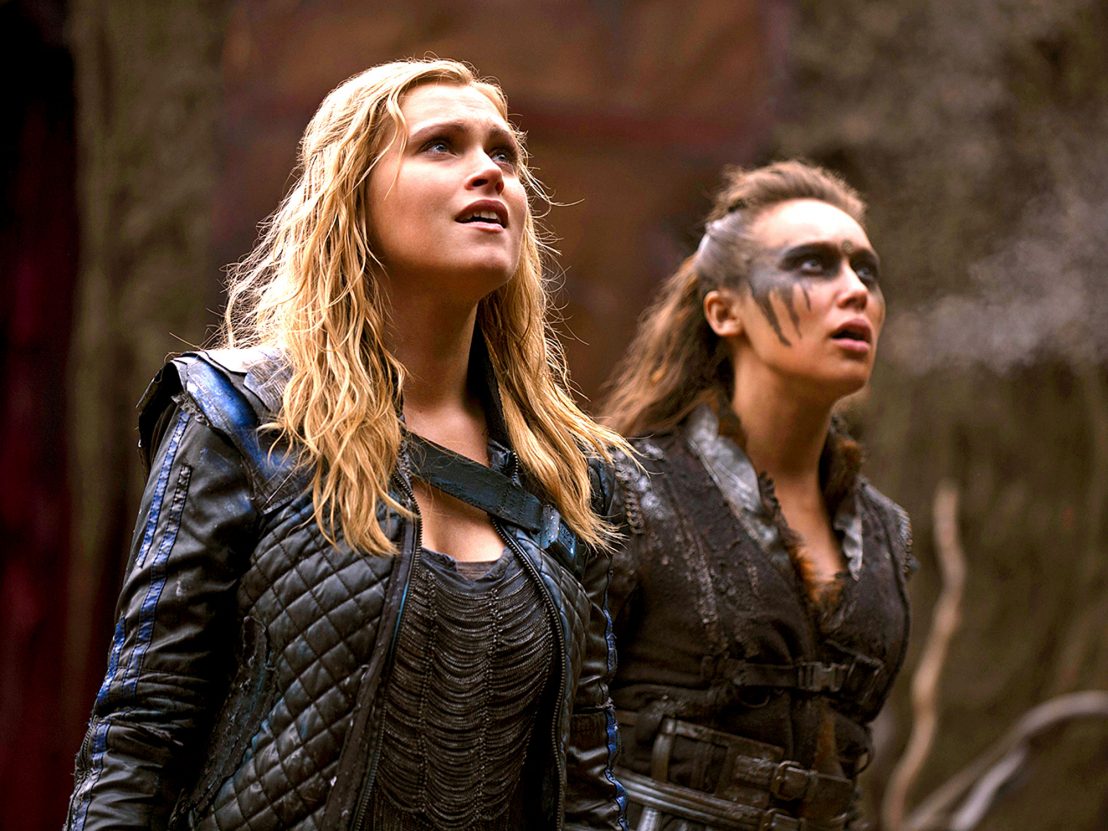 It was the last straw, and it had been a long time coming. The show was The 100, and the characters were Clarke and Lexa. Based on the popular book series that was part of the recent YA sci-fi boom, a trend that briefly set the box office alight before disappearing with a fizzle, The 100 quickly took root in its intended audience. They adored the show, where delinquent teens are the first the return to earth 97 years after a nuclear apocalypse, finding that they, born on ‘The Ark’ (‘sky people’) in space share the earth with those born there (‘grounders’).

A war ensues between the two sides. But despite battle, love blooms when Clarke (Eliza Taylor), from the sky, falls for grounder Commander Lexa (Alicia Debnam-Carey). There is an undeniable attraction between them until, immediately after they first have sex, Lexa is killed. Some argued that queer female characters shouldn’t be immune to tragedy, and indeed reality. But in truth Lexa’s untimely death is just the latest incident in a long and sad history of queer women on screen.

The 100’s fans responded with rage and action. Young, connected, and predominately female, they’d also watched characters like Orphan Black’s Delphine and The Walking Dead’s Denise perish before their eyes, and they’d had enough. The hashtag #LGBTfansdeservebetter trended during the following week’s episode of The 100, and a campaign to raise money for LGBTQ+ charity The Trevor Project was launched. The backlash could have lasted minutes, quickly fizzling out as the internet’s attention was drawn elsewhere. But at ClexaCon, which ran from March 3-5 in Las Vegas, the fight continued.

Asked why Lexa’s death led to such an uprising, the organisers of  ClexaCon responded: “It is always difficult to pinpoint what spurs a movement at a given time and place. Social media and fandoms most certainly had a vital role to play. If the internet of today existed when Tara was killed on Buffy, or when Xena was killed off at the end of that series, it seems likely that this revolution would have started a lot sooner. Lexa was a beloved character, and the feelings of shock and loss the community experienced were likely just the tipping point – when the queer community finally had enough of the ‘bury your gays’ trope and decided to do something about it.”

On the surface of it, ClexaCon looks like just another fan convention. There are meet and greets with special guests, panel discussions, a film festival and a cosplay contest. Except ClexaCon is different. This year’s guests included actors Amy Acker and Sarah Shahi (whose character in Person of Interest was controversially killed around the same time as Lexa), Katherine Barrell and Dominique Provost-Chalkley (from Wynonna Earp), and Elise Bauman and Natasha Negovanlis (from the web series Carmilla) – all of whom play queer characters on TV.

Unlike most fan conventions, however, wider issues are discussed at ClexaCon, with the conversation at this year’s event turning to how fans can not only love what they watch but become involved, writing and shaping their own stories. “At most conventions you’re hard-pressed to find actresses and content that are LGBT+ friendly, let alone geared specifically toward LGBT+ audiences,” say the organisers. Andras hosts a workshop about writing “damn good TV for women”, and there are others on speed pitching and developing ideas for film, TV, streaming and print.

There’s plenty of open debate about representation, too, from youth perspectives as well as the state of representations of bisexuals, trans women and women of colour. Lexa’s legacy, and how to keep the conversation going, was also high on the agenda. “An event like this also allows public figures with large followings to help promote the fact that everyone deserves to see heroes they can identify with, and I think that’s a beautiful thing,” says Carmilla star Natasha Negovanlis. “I also think it’s up to authority figures, and to anyone in the public eye, to speak up and be leaders for the LGBT+ community and its allies. It’s a responsibility I do not take lightly, and I think anyone who has a strong voice or a platform should use it to influence others to diversify on-screen representation on all fronts.”

She continues, “Carmilla is much more globally accessible than mainstream television due to the nature of digital series and how they are shared. This is vital for LGBT+ members who live in countries where being anything but straight is outlawed. They are able to find escape and a sense of community online because of our ‘little web series that could’ and it’s great to know that our work is helping people.”

Excitingly, the conversation started in the wake of Lexa’s death was entirely fan-driven, something that the organisers of ClexaCon, which grew from a small group of friends discussing representation on Twitter, aims to mirror. “As the idea grew and the word spread that we were planning the event, many people reached out wanting to help,” they say. “There would be no ClexaCon without the fans. This movement began because of the fans. Television, film, and other media are made for fans. The energy, excitement, brilliance, and togetherness of the fandom is what will make ClexaCon a success.”

“Art should always be political, I don’t think there is a way to separate the two,” says Carmill’s Elise Bauman, who plays Laura, a first year university student who falls for her roommate (who happens to be a vampire) in the popular web series. Carmilla is one of an increasing number of shows that feature queer female characters, helped by a diversifying, multiplatform media landscape in both the mainstream and lower budget spheres.

Carmilla is based on the 19th century novella of the same name by Sheridan Le Fanu, transposing the story to a modern university and reclaiming past negative representation in the process. “The book keeps with the god-fearing times of portraying the attraction between Laura and Carmilla as a cautionary tale of lust between women,” Bauman says. “Of course, I believe it’s important to literally change the narrative of a story that seemingly condemns female sexuality and turn it into a positive thing.”

Where once there was Buffy, now there is Carmilla, Wynonna Earp, Supergirl and other shows covering different genres and made for all ages which place queer women front and centre. “If the only stories that are being told in the media are ones that further perpetrate the narrative that people of certain sexual orientation, gender identification, race and class are somehow different and less than, then that is what will keep being believed and acted out in the world,” Bauman says. “I think it’s so important for the screen to reflect all people and aspects of life.”

So why was Lexa’s death the final straw? “I think people felt betrayed and angry when the few queer characters they had found on screen kept disappearing,” Bauman observes. “As queer stories are becoming more mainstream, I have seen shows try to capitalise on that by introducing queer characters as a way to entice new viewers, but not giving them proper screen time. One of my least favourite things is when a series has been running for a while, and then all of a sudden it’s revealed that one of the supporting characters is gay, but they don’t even show a same-sex kiss on screen.”

Negovanlis agrees: “I think that’s changing, but we still have so much further to go. Fans were aching to see a televised relationship that reflected their own experiences. It had been quite some time since a healthy, lesbian relationship was portrayed on a historically heteronormative network, so seeing ‘Clexa’ filled people with much needed hope. But by killing off yet another gay female character, it stripped away that hope and left people feeling violated. Something I often hear from fans is the sense of community they have found in the Carmilla fandom family, that being part of the self-dubbed ‘creampuffs’ have helped them feel accepted and less alone.”

Belonging is what ClexaCon is all about – the sincere belief that together a community can change their fate on screen. “We want to see an increase of positive LGBT+ representation in the media,” Negovanlis concludes, “and hope that ClexaCon will be a place where creators can network and breathe life into characters and stories that represent the LGBT+ community in positive ways. Our world is diverse. Our media should reflect that. ClexaCon is for those of us who have placed our hope in a fictional character just to have been let down. We are powerful and we are important. It’s time our community felt that. It’s time we are the change we want to see in the world.”