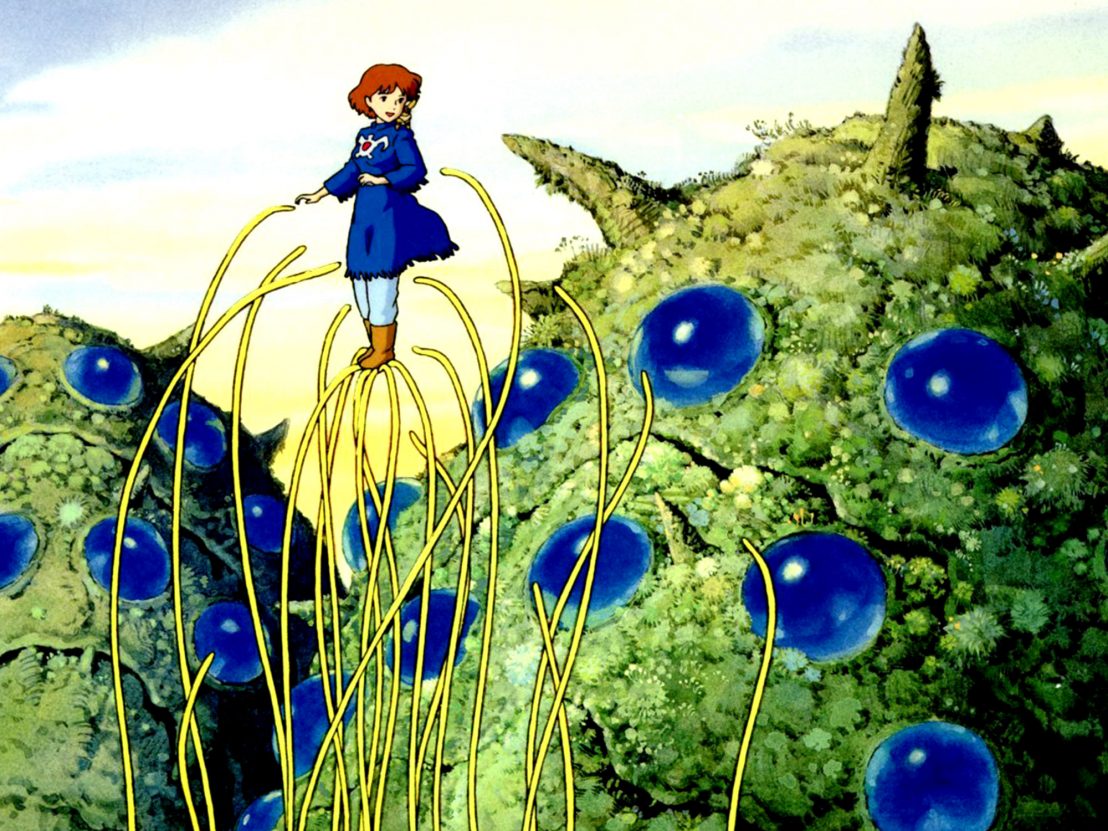 A thousand years after the collapse of industrial society, human settlements are sparse and civilisation has reverted to feudalism. Most of the earth’s surface is covered by the Sea of Decay, an intricate, toxic forest where the air is so polluted that humans can only survive for five minutes without wearing a mask.

Gigantic, trilobite-like arthropods – called Ohmu – live peacefully in their poisonous habitat but angrily swarm the earth when attacked. There’s a valley though where gentle winds keep the spores at bay and people live in a peaceful community ruled by an inspired king.

The first time we meet the king’s daughter, Nausicaä, she’s braving the Sea of Decay, foraying into the forest on one of her scientific explorations. Respectful of all the living things she encounters, we see her taking notes, collecting samples of spores and stumbling across an enormous exoskeleton of an Ohmu.

She marvels at its beauty but she’s also aware of how such a finding would be useful for her village. Nausicaä is a perfect blend of scientific explorer and spiritual messiah; as noted in an essay by Andrew Osmond, her enlightened connection with nature is ultimately what leads her to a peaceful resolution of all the film’s conflicts.

Nausicaä is an incredibly complex and nuanced character. She is half-Disney princess, demonstrating piety and a close bond with nature, but she also displays traits more commonly associated with male protagonists. In one scene, she resolutely takes vengeance on a bunch of soldiers who attacked her village and killed her ageing father.

Moments later, in the calm of her secret cellar where she cultivates the flora of the Sea of Decay, she bursts into tears in the traveller Lord Yupa’s arms and admits to being frightened by the thought of what her rage might lead her to do. Yet while she may be fierce and free-spirited she is above all a pacifist, and she recognises that the key to the planet’s salvation lies in letting nature purify the earth that humans have polluted.

Amid our current ecological crisis, with some governments still openly denying the full scale of the problem, Nausicaä’s message is more vital than ever. Described as a manifesto of “radical ecological ethics” by Thomas Giddens in ‘Law and Justice in Japanese Popular Culture: From Crime Fighting Robots to Duelling Pocket Monsters’, Hayao Miyazaki’s film calls for humankind to find a way to coexist with the natural world in a balanced and sustainable way.

For Nausicaä, there’s no other viable option – all the more so because in her compassionate and gentle vision human’s life is never valued more than an animal’s. By adhering to such a radical philosophy, the self-imposed sovereignty of humanity over nature ceases to exist and the door to a mutual understanding between humans – although primarily embodied by Nausicaä – and Ohmu is decisively open.

For all these reasons, the World Wildlife Fund, the world’s largest non-governmental organisation committed to wilderness preservation and a reduction of human impact, recommended the film in the hope that it could help to spread the message for environmental peace with Nausicaä leading the way as a green heroine.

Yet the film’s lesson is also reinforced by Miyazaki’s masterful attention to detail with regards to setting. Whereas cities and hamlets have a medieval, middle-European vibe to them, the Sea of Decay’s flora reminds us of the coal forests covering the Earth’s during the Carboniferous period while the giant insects that intimidate humans are reminiscent of the ones ruling the prehistoric skies before the advent of birds. To think that such is the landscape of a future Earth is the ultimate reminder of our own triviality against the macrocyclic essence of nature.

By envisioning a tale of ecological awareness and pacifism, Miyazaki created a selfless heroine who can exercise compassion as much as she can wield firm hand on whoever threatens to tread over nature to regain their status. In between these two forces, Nausicaä finds her strength, and with that she shines as the Earth’s saviour.