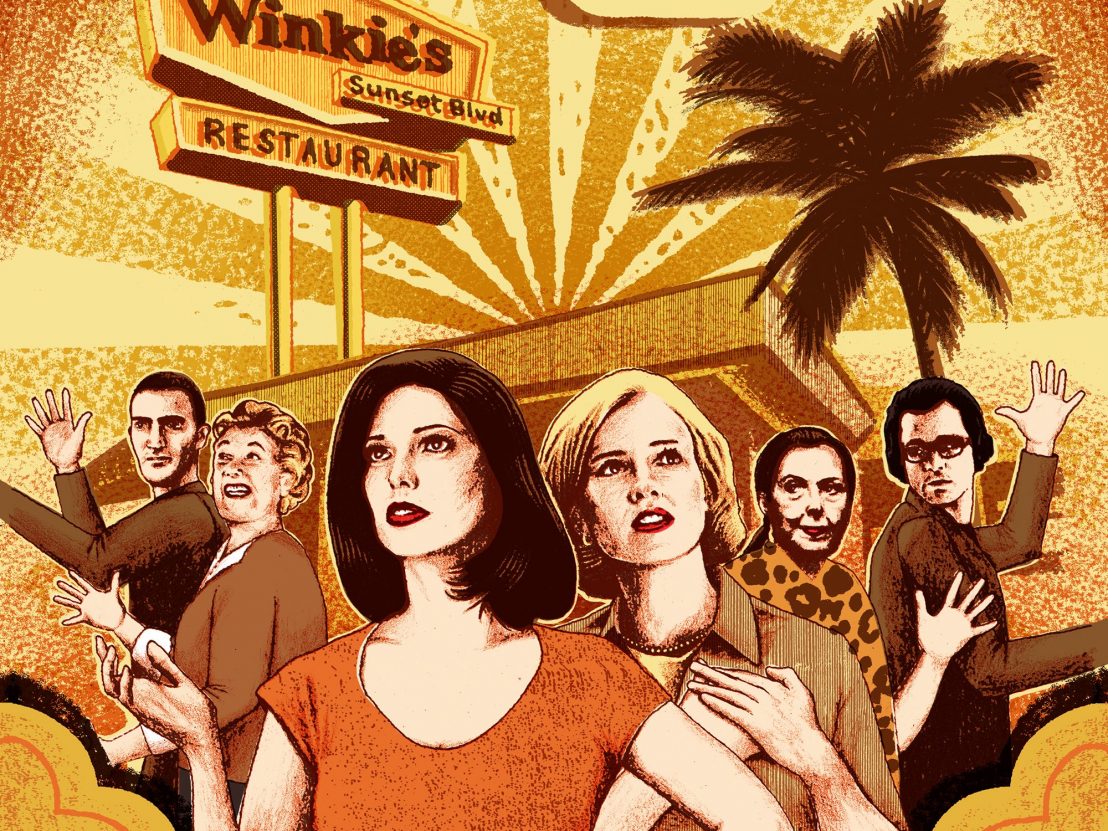 Is David Lynch the greatest contemporary director of musical sequences? For all the honourifics hurled at the favourite son of Missoula, Montana over the years, this designation has never stuck despite plenty of evidence. The case dates all the way back to the Lady in the Radiator’s chipmunk-voiced rendition of Peter Ivers’ ‘In Heaven’ in Eraserhead, a scene that served as a template for many moody interludes to come.

Think of Isabella Rossellini crooning the title song from Blue Velvet on a darkened stage. Or, in the same film, Dean Stockwell lip-synching to Roy Orbison’s ‘In Dreams’ while clutching a Klieg light like a rosary. Throw in Nicolas Cage’s flamboyant Elvis Presley vamps in Wild at Heart and the Roadhouse house band in Twin Peaks and a pattern emerges: more often than not, Lynch’s films pivot on pop standards performed either in isolation from – or counterpoint to – the narrative action.

Mulholland Drive is not only adorned by a series of indelible musical numbers but also built solidly around them, to whatever extent a movie famously salvaged from the wreckage of a crashed-and-burned television pilot can be said to have a structure in the first place. It opens with a hallucinatory, high-contrast, quick-cut prologue describing a small-town jitterbug contest (a blatant anachronism given the millennial setting) and then proceeds in plot terms like a showbiz melodrama about a bright-eyed ingénue (Naomi Watts) decamping to Los Angeles to hit it big in the pictures (she’s from “Deep River, Ontario,” which has to be the most Freudian small-town moniker since Twin Peaks).

That Betty’s story intersects with a thriller-like scenario about a beautiful, amnesiac woman, Rita (Laura Elena Harring), is par for the course for Lynch, whose films are often schizophrenically split between genres: the contrast between a naive blonde and a dark-haired woman with a secret is fully carried over from Blue Velvet (and also Lost Highway, where Patricia Arquette combines both archetypes in a phenomenal dual performance). And a fleeting glimpse of the poster for Gilda – a long-ago star vehicle for another lovely Rita – reminds us that even the darkest noir can brighten for the duration of a white-hot torch song.

The first showstopper in Mulholland Drive comes on the set of the film that Watts’ Betty is auditioning for, the prosaically titled (and again, judging from its candy-coloured soundstage backdrops, wildly anachronistic) The Sylvia North Story, which appears to be a musical. As Betty arrives for a meeting with the director, Adam Kesher (Justin Theroux), Lynch shows us another starlet (Melissa George) in Doris Day drag mouthing Linda Scott’s 1961 hit ‘I’ve Told Ev’ry Little Star’.

The slow cutting between the perky performance in front of the camera and the fraught, meaningful looks being exchanged between Adam and Betty from their vantage behind the lens encapsulates the divide between fantasy and reality that provides Mulholland Drive with its underlying (and tragic) dialectic. In this explicitly counterfeit context, the chipper “dum da dums” of the song’s chorus are rendered ominous and haunting, an ideal interlude for a film that descends into a pillow-sweating nightmare.

This deft play with sound and image and sly deployment of pop culture signifiers is surely the stuff of critical exegesis, and the temptation to try to “explain” Mulholland Drive and how it reconciles all of its many split and loose ends is seductive indeed. Even back in 2001, in the relative infancy of the internet, online chat rooms and comment sections were a re with theories about how to best interpret Betty and Rita’s adventures around Los Angeles and their apparent transformations, two-thirds of the way through the film, into two completely different women – the struggling actress Diane and the Hollywood doyenne Camilla.

Or was it the other way around: were Betty and Rita the “real” characters and Diane and Camilla their dream-factory fantasy projections? And what about the Lynch mob of weirdos and wackos surrounding them, including, but not limited to, Dan Hedaya and Angelo Badalamenti as fraternal Italian hitmen the Castigliani brothers; Twin Peaks alum Michael J Anderson as the diminutive criminal mastermind Mr Roque; Michael Montgomery as a menacing cowboy; Billy Ray Cyrus as a pool boy; and one-time screen siren Ann Miller as a kindly landlady? Or Robert Forster in a sole scene as a puzzled police officer? Or the impassive, soot-faced figure (a man? A woman? A human being?) crouching behind Winky’s diner, challenging Killer BOB’s position as the scariest creation in the director’s repertoire?

“Mulholland Drive becomes one of the few films to do something substantial with that hoary old ‘it was all a dream!’ conceit.”

To which we say: don’t worry, it all makes perfect sense upon reflection (and let’s say probably a half-dozen attentive repeat viewings). But Mulholland Drive also doesn’t have to be decoded in order to be enjoyed, which is probably why it has, perhaps improbably, endured both as one of Lynch’s most beloved works and as a routine champion of best-of-the-decade polls. It may be because it offers more surface pleasure than perhaps any other Lynch film, starting with Peter Deming’s glossy, sunblind cinematography and the screenplay’s many movie industry in-jokes, which build on Lost Highway’s embedded Tinseltown critique.

There, the story was about a jazz musician drawn into a sordid coastal underworld of petty criminals and pornographers, with Bill Pullman’s performance serving as a portrait of the artist self-combusting under pressure. It may be that Mulholland Drive was more popular than its predecessor because, instead of an anguished, five o’clock-shadowed sadsack as an entry point, it offers up the sweetly indomitable Betty, whose pluckiness and careerist ambitions are rendered tenderly… until, suddenly, they’re not and Watts’ acting shifts into a different register entirely, revealing the rejection and bitterness underneath the polished façade.

Which brings us to Mulholland Drive’s second major musical number, set on the main stage at Club Silencio, where Betty and Rita take in an early-morning cabaret show just hours after unexpectedly falling into bed with one another (a scene whose fleshy eroticism splits the difference between passionate romance and audience pandering). As the club’s MC Richard Green explains the difference between truth and illusion, the women start to look worried, and when the headliner (Rebekah Del Rio as herself ) comes out to sing a Spanish-language version of Roy Orbison’s ‘Crying’, they break down together into the very tears described in the song’s lyrics.

The sequence is a masterpiece of carefully crafted affect, as De Rio’s desperate melancholy is transferred first to Betty and Rita and then to us in the audience. From somewhere inside the archly art-directed vacuum of Club Silencio, Lynch conjures up emotions no less powerful for being so inscrutably generated. The kicker is that when Del Rio faints dead away, the song continues, revealing that she’s been lip-synching the whole time – an ersatz aria.

It is at this point that Mulholland Drive turns itself inside-out and forces us to ask if everything we’ve seen, including and especially Betty and Rita’s romance, is similarly phoney, and to confront the fact that a movie that has gotten us swept up in the intrigue and excitement of Hollywood is examining those fantasies. It’s not simply that Betty/Diane is another of Lynch’s multiple-personality protagonists, like tramp-next-door Laura Palmer or Pullman’s existentially figure-eighted Fred Madison.

By retrospectively unveiling its (anti)-heroine’s denial of who she really is (and the terrible things she’s done) as an extended fugue state indistinguishable from the lusciously old-school thriller we’ve been watching all along, Mulholland Drive becomes one of the few films to do something substantial with that hoary old ‘it was all a dream!’ conceit. Betty’s awakening to her true nature is not a way out of the story, for her or the audience.

Instead, it’s a way into the idea that in keeping reality at arm’s length, cinema sustains us because of, rather than in spite of, its essentially deceptive nature. As long as the lights stay down and the song keeps playing, we at once rehearse and delay our reckoning with the things that exist beyond the frame. Mulholland Drive is great film art because it fully inhabits its chosen medium while reminding us how ephemeral it is in the end. Cinema – and life – is but a dream. The rest is Silencio.