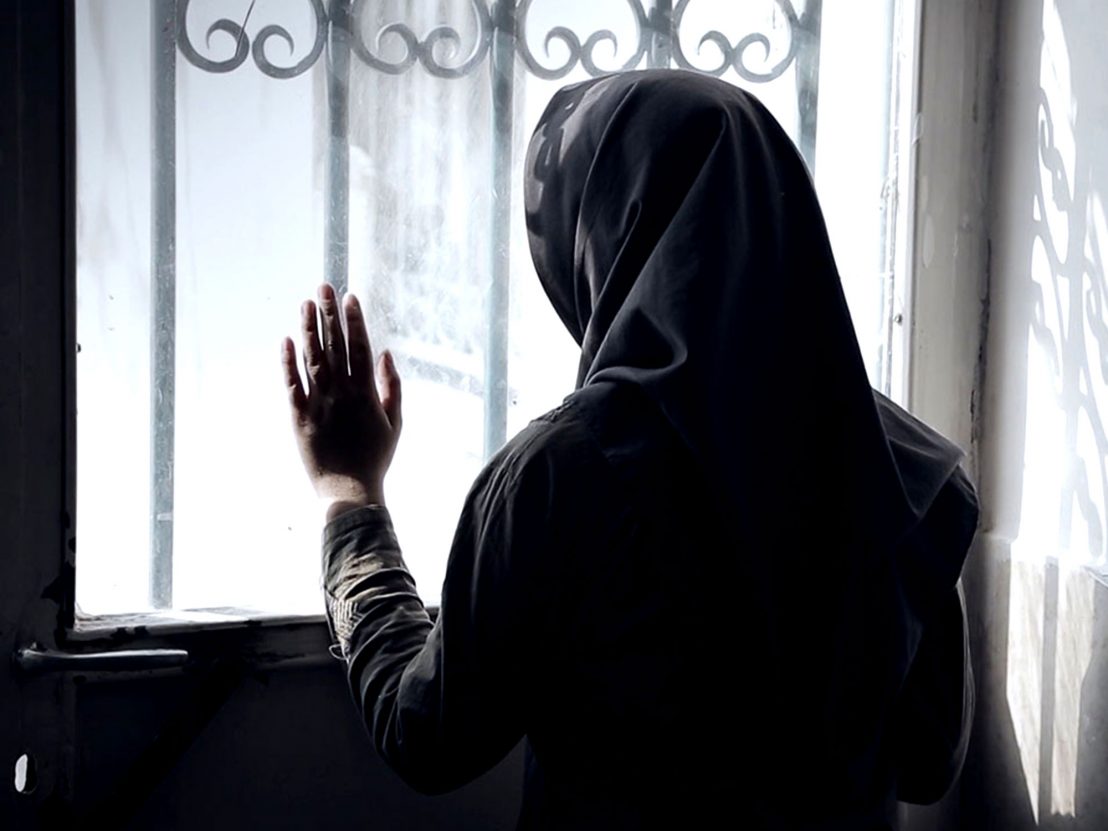 International news coverage presents a very specific, often simplistic narrative of the Middle East. Cinema has the opportunity to provide an alternative. Elhum Shakerifar, one of two BFI London Film Festival programme advisors for MENA regions, is “particularly interested in challenging those meta-narratives that are created by the news, the reflection of this area of the world simply as a conflict area.”

Filmmakers, particularly documentary makers, have a unique opportunity to present stories that differ from those that are usually told; and programmers, especially those working for a high-profile festival like the LFF, have a responsibility to help get them seen. “That’s where cinema has the role of shining a light in a completely different way, of broadening understandings, of making things more personal and palpable, letting us understand beyond that news-bite image that we are constantly being relayed.”

A film in the festival that does this particularly successfully is Iranian documentarian Mehrdad Oskouei’s terrific Starless Dreams, a film about an all-female institute for juvenile delinquents that he battled for seven years to make. In his deftly constructed, sensitive portrait of the young women contained with the centre, Oskouei makes no attempt to hide his position as filmmaker, including many of the questions he poses to the girls in the film and making his presence as an outsider clear. Despite this, he manages to present the feelings, thoughts and stories of the girls (whose crimes vary massively in scale and seriousness, as do their feelings towards society and their families) front and centre, and remains compassionate and non-judgemental towards each person he spotlights. “Her story is the same as mine,” one girl says, collapsing into tears at the revelations Oskouei draws from her friend.

Intercutting interview footage with everyday detail (children’s toys, a bird flying into the prison’s courtyard, money stashed under a bed), and shooting with consistent creativity, Oskouei creates a rich picture of the environment he is looking in on, making a documentary as cinematic as it is curious and empathetic. A concise, simple film that focuses specifically on people and their situation, Oskouei avoids overtly politicising what he portrays. Ultimately, Starless Dreams refrains from offering direct commentary on the specifics of criminal justice in Iran, nor on the gender politics of the Middle East, as it might be expected to, instead providing insight into humanity in general. It leaves us with the question of how we can better reintegrate criminals into society – as one of the girls states, “our expectation from society is obvious, but what does society expect from us?” 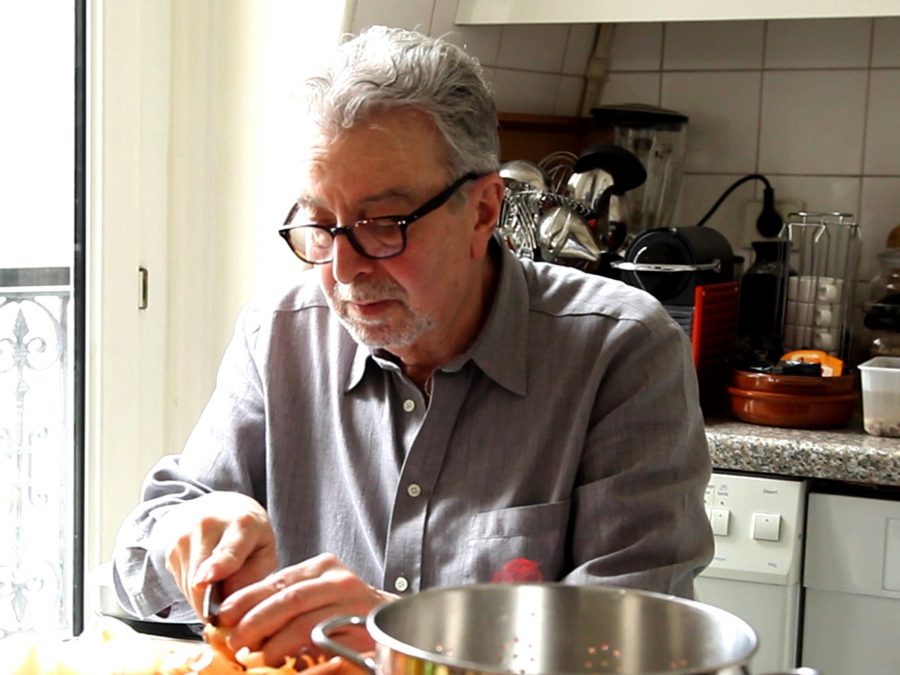 Hala Alabdalla’s Farouk, Besieged Like Me is also concerned with society. Ostensibly a portrait of writer, publisher and intellectual Farouk Mardam-Bey, it is also an open-ended investigation into the man’s homeland, Syria. Alabdalla’s film uses the probing intellect of it’s participants to inquire into issues surrounding a nation in flux – thinking less about the current conflict and more “its history, its people, its culture and its economy.” A simple film in style and execution, veteran documentarian Alabdalla uses the voices of the participants to speak for her and other Syrians, hearing from Mardam-Bey alone first as he prepares for a Sunday gathering, before the guests arrive and the documentary’s focus opens outwards.

The formal centrepiece of the documentary, this dinner sees many intelligent voices from across the Arabic literary scene gather to debate all manner of issues related to their countries and culture. The segments with Mardam-Bey alone are no less enlightening, as we observe him displaying his humility as much as his intelligence. With it’s focus on thoughts and words, Farouk, Besieged Like Me consists primarily of talking heads and observed conversation, but it also contains the occasional cinematic flourish. In the closing shot, recorded from a distance through a window frame, we see Mardam-Bey sat down, surrounded by his books with his black cat perched beside him, checking the news on his computer (“a ritual for all Syrians”). It is an image that lingers; quiet yet profound. 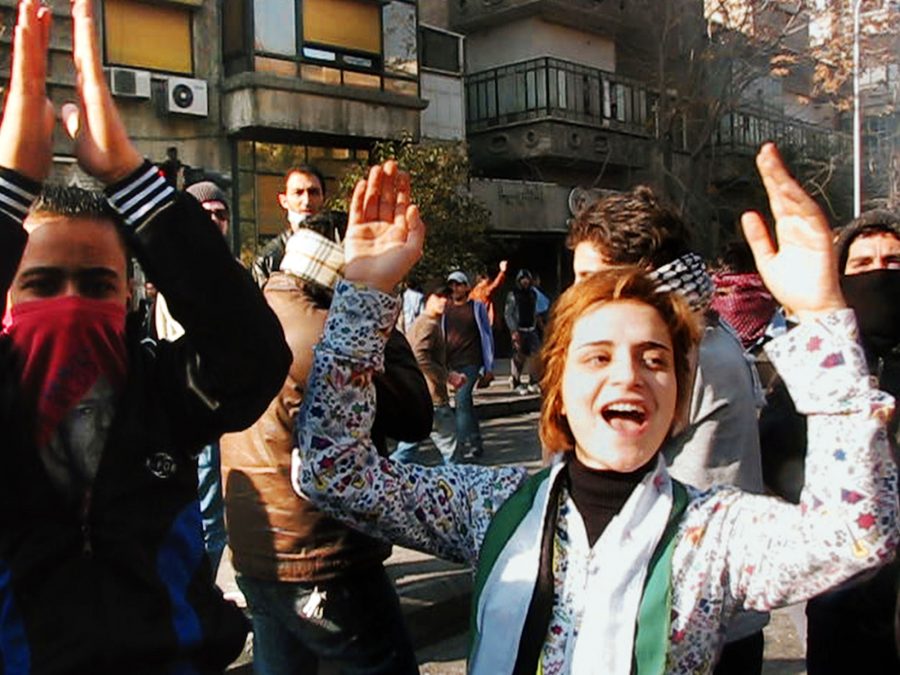 At one point Mardam-Bey asks if it is, “possible that history may come to a standstill in our appalling present?” The other documentary about Syria at the LFF, Andreas Dalsgaard and Obaidah Zytoon’s The War Show suggests not, revealing a nation that is anything but static. It’s at once a dense chronicling of the experience of living and resisting in Syria 2011 and onwards, and a fitting tribute to the personal cost of that struggle, a barrage of war trauma and lost lives as experienced by a group of friends unified at first by their desire for a free Syria, and then, traumatically, torn apart by it. A poetic document constructed from citizen journalism-style footage collected over several years, and narrated with a wearied, mournful lyricism by Zytoon herself, the film is an ambitious attempt to make sense both of a national conflict and the individual experience of it.

Switching between Zytoon’s own stories and those of the Syrians she meets along the way, Zytoon and Dalsgaard recognise the role of the camera that has been central to the understanding of conflict and revolution during the Arab Spring. “In any conflict, truth is the first victim,” Zytoon announces early on, addressing the slippery proposition of trying to write a history-in-progress. But while the record that the two filmmakers construct together – from some 300 hours of footage – encompasses a great deal of the topics central to discussion of Syria (resistance, suppression, extremism), The War Show is not an attempt to provided a cross-section of the Syrian conflict for external viewers. It succeeds by homing in on the suffering experienced within a single group, which in itself is suggestive of that of the hundreds of thousands not featured. One of Zytoon’s concluding poeticisms says it all. “The Syria we know has gone, and the Syrians, wherever they are, have become the new map.”

If the aim of documentary is truly to reflect the reality of the region, in a manner that counters what we usually see, Shakerifar believes that filmmakers shouldn’t need to “reference everything that is happening on a day to day basis.” As in these documentaries, filmmaking in the wake of the Arab Spring can hopefully continue to “be more intimate, personal and show unusual and unexpected things,” subvert familiar representations and showcase the thoughts, beliefs and viewpoints of the filmmakers as well as the diversity of the experience of living in this misunderstood, often misrepresented region.