With its surreal premise and zoological themes, Richard Franklin’s Link remains a most curious creature. 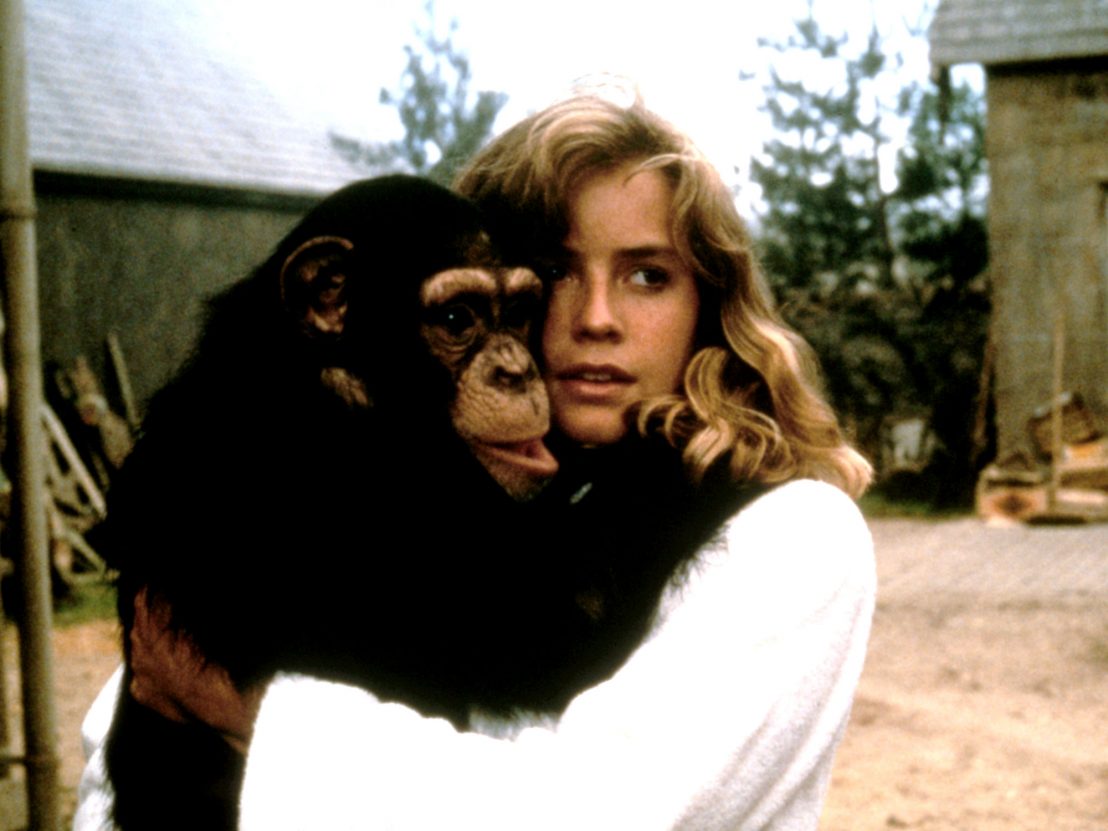 In 1960, at the impressionable age of 12, Richard Franklin saw Alfred Hitchcock’s Psycho in his native Australia, and it changed his life forever. His first two features – The True Story of Eskimo Nell and Fantasm – may have been at the sexier end of the Ozploitation wave, but he soon formed a fruitful working relationship with the screenwriter Everett de Roche making down under the decidedly Hitchcockian thrillers Patrick and Roadgames.

Consequently he was lured to America for his dream gig helming Psycho II, a belated sequel that perhaps few wanted, but whose immense qualities and improbable worthiness of the original took everyone by surprise. Franklin had now earned himself a privileged position as a director, and was quick to capitalise with the well-received family espionage film Cloak & Dagger, and then with Link. The latter revived his collaboration with de Roche, but its critical reception was poor, and, at least temporarily, damaged Franklin’s career.

After a credit sequence showing paintings of apes in jungle settings, and ending on an ape locked in a combat with a human hunter, Link opens with that staple of the slasher, a POV shot in a park at night. This aligns our view with that of a voyeuristic prowler, initially drawing our eyes to two shops – one a fast food outlet, the other a strip club. Food and sex. These are basic drives that, for all our supposed civilisation, remain the link between us and the ‘lower’ animals, and as our creep uses a trellis to scale the outer wall of a building – echoing the beginning of Bob Clark’s ur-slasher Black Christmas, but also the ape’s climactic ascent in King Kong – we remain unsure to which end of the evolutionary scale this unseen menace belongs, or indeed which particular kind of appetite he longs to satisfy.

While a vulnerable little girl listens nervously in her bed (by a half-open window) to the sounds of violence on the roof, her parents are downstairs, obliviously watching television. The film playing on their small screen is Josef von Sternberg’s Blonde Venus, and more specifically it’s the sequence where a gorilla is led in chains through a crowded night club, only to tear off its mask and reveal a sultry, singing Marlene Dietrich underneath. Here the distinction between humans and other primates is being careful broken down before our eyes – even as a chimp on the roof makes its own fast food of a cat and some caged pigeons.

The interrupted scene from Blonde Venus serves as an inverted statement of intent from Link itself. For while apes in cinema were typically stop-motion models or (wo)men in masks, Franklin opted to ignore the old showbiz adage of never working with animals, and insisted on using only actual apes (trained by Ray Berwick) for this simian thriller.

So when American student Jane Chase (Elisabeth Shue) agrees to help anthropologist Dr Steven Phillip (Terence Stamp) run the isolated seaside home that he shares with his three research chimps – Link, Voodoo and the cat-killing Imp – these are the real deal, even if, in a bizarre case of ‘blind casting’, alpha male Link is in fact played by an orangutan (Locke), made up to look more chimp-like with dyed fur and prosthetic ears. An old ex-circus chimp who likes to dress in human clothes and who has been trained to be a “master of fire”, Link is due to be put down, but instead spots an opportunity to eliminate his human master Steven and to become lord of this English manor himself, leading Jane to find herself locked in mortal combat with this mighty, murderous apex predator. 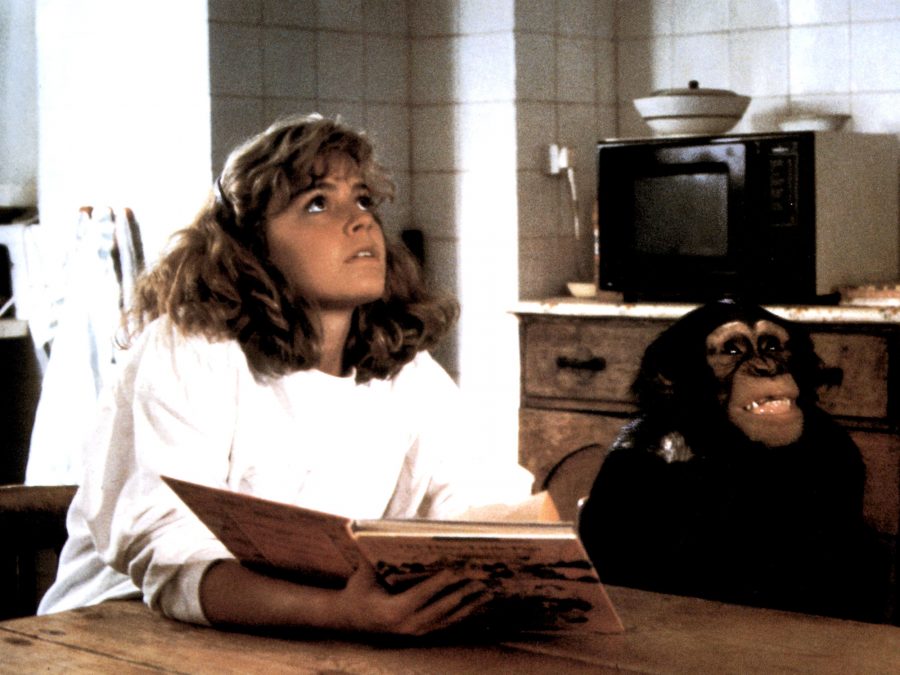 “You’re a girl,” responds Steven dismissively when Jane approaches him about becoming his assistant, “That’s impossible.” The indignant Jane replies: “Well what about the laws against sexual discrimination?” It will turn out that the amused Steven had been advertising for volunteer sperm donors. He still hires Jane to help him at home, but sex remains an issue. Steve is openly flirtatious with his assistant, and certainly the pals of Jane’s boyfriend David (Steve Pinner) assume that Steven and Jane are doing more than just working together. This is important, because Jane’s emphatically feminine presence also has an effect on the balance of relations among Steven’s animals (of whom only Voodoo is female).

Various explanations are given in the film for Link’s aberrant behaviour, including – absurdly, if you think about it – a desire to avoid being euthanised. Yet far more straightforwardly ‘animalistic’ motives are available: Link wants to be top dog, displacing Steve and other males (human and animal) from their positions of dominance; and he wants Jane as his new mate. He is obviously jealous of Jane’s affection for Imp, and there is even here an equivalent to Psycho’s shower scene, as Link tries insistently to observe Jane naked in the bath.

Jane’s flesh, evidently, is not just for eating. This sexual theme is further suggested by the distinctively vulval opening of the cave through which, via an underground tunnel, Jane repeatedly escapes the house. Jane is, as it were, being reborn, even if, in one key scene as she reenters the cave to face her primal fear, she is figured as atavistically returning to the womb. Despite his sexual interest in Jane, Link does kill women as well as men, and Jane – named as much for the explicitly referenced chimp expert Jane Goodall as for Tarzan’s lover – must think like an ape to outwit her assailant.

In a sense Link is a tragic figure. One can only imagine the abuse that he suffered in the circus when his handlers grotesquely dressed him as a person and forced him to play with fire and go against his nature in other ways. Link’s confusion, shared by the film, between human and ape has made him a psycho, in a large property that notably resembles the old Bates place. Yet even as Franklin’s film looks back to Hitchcock – and to the hand-holding, knife-wielding chimp in Dario Argento’s Phenomena – it also proves the missing link in the evolution of cinema future as much as past.

Franklin is a fantastic director, and Link provides plenty of siege and survival thrills to accompany its surreal pithecoid premise. Jerry Goldsmith’s jaunty score, however, while certainly introducing an appropriate circus-like atmosphere, also envelops everything in a light, playful tone that never quite matches the stalk-and-slash material. Perhaps, though, Link is a human comedy after all, showing us our not altogether elevated place on the evolutionary chain.

Link is available on Blu-ray, DVD and digital from StudioCanal on 1 Feb.