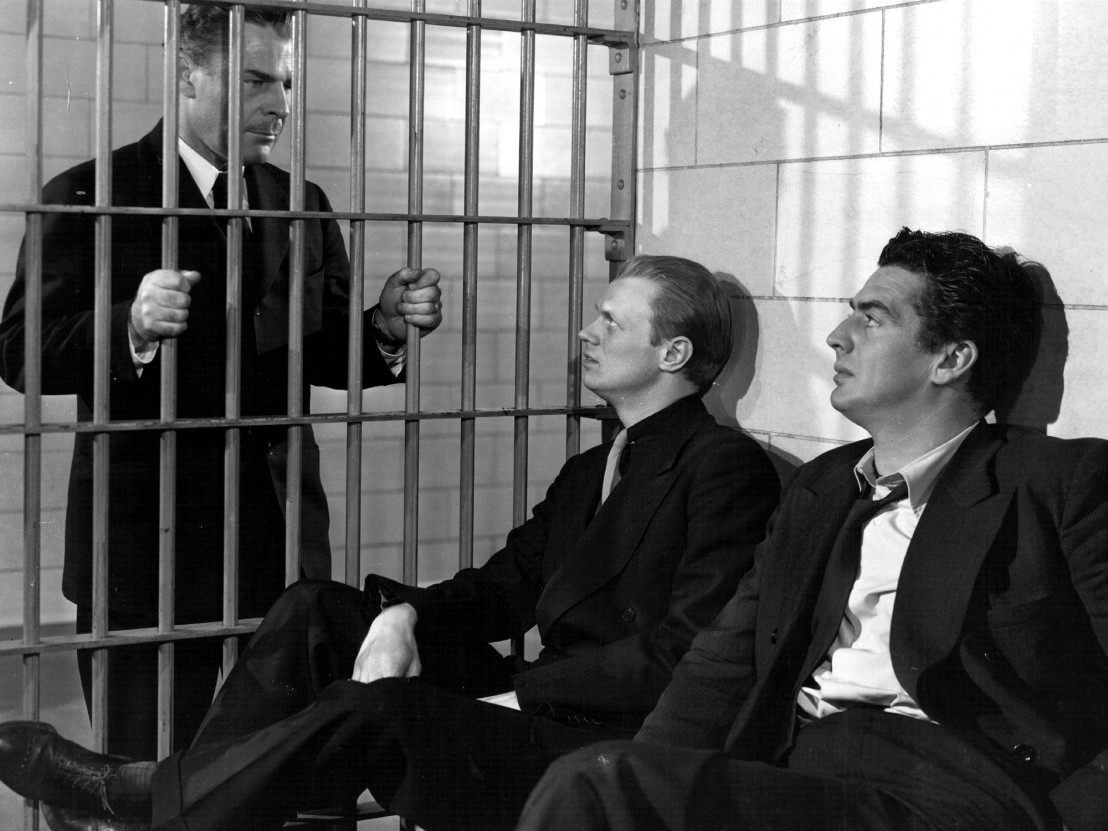 “For a nickel I’d grab him, stick both thumbs right in his eyes, hang on ’til he drops dead.” So says psychotic villain Tommy Udo (Richard Widmark) about a prison guard at the beginning of Henry Hathaway’s 1947 film noir Kiss of Death. By any measure, this was a sensational debut: Widmark, at the age of 33, burst onto the scene in a reasonably small role that threatened to overshadow Victor Mature as the good guy, and led to the film being promoted on the back of Widmark’s irredeemably unpleasant killer.

Mature is an ex-con trying to go straight, coerced into testifying against Udo, who doesn’t take kindly to “squealers”. In the film’s most infamous scene, Udo ties an old woman to her wheelchair and cackles manically as he pushes her down a flight of stairs. Widmark’s performance was so popular, that in the same way Gordon Gecko became a cult hero figure of the real-life Wall Street, actual gangsters started to model themselves on Tommy Udo. The film was remade in 1997 with Nicolas Cage in the Udo role, in a crude and ill-measured performance that makes Widmark’s leering, lunatic debut seem like a masterclass in restraint.

Widmark tackled the part with relish, his lip curling inflection and sneering, theatrical laugh recalling British thespian Tod Slaughter, who happily played a string of wretched baddies in the ’30s and ’40s, including Sweeney Todd in The Demon Barber of Fleet Street. He based his performance on the Joker from the Batman comics (a character itself inspired by German actor Conrad Veidt’s gruesome grin in the 1928 film The Man Who Laughs).

Things came full circle in 2008, when Heath Ledger appeared to channel Widmark’s gleeful, cackling villain into his Oscar-winning turn in The Dark Knight. Both Ledger’s sadistic Joker and Udo relish extracting as much pain from their victims as possible, and crow about the fact repeatedly. Consider this line from The Dark Knight: “Do you want to know why I use a knife? Guns are too quick. You can’t savour all the… little emotions.” Now Udo in Kiss of Death: “You know what I do to squealers? I let ’em have it right I the belly. So they can roll around for a long time thinkin’ it over.”

Widmark was nominated for an Oscar, and won the Golden Globe for most promising newcomer in 1948. He followed up Kiss of Death with The Street With No Name, playing an equally unpleasant character, mob boss Alec Stiles, and in 1950 he added two more bad guys to his CV: in 1950’s No Way Out, he plays pathological racist Ray Biddle opposite Sidney Poitier as an idealistic doctor; and in Jules Dassin’s superb Night and the City, released the same year, Widmark excelled as American con man Harry Fabian, who you can’t help but root for in spite of his compulsive larceny.

These were brave choices for a new star being groomed for Hollywood leading man stardom – characters who, to quote the mould-breaking Udo, “wouldn’t give you the skin off a grape”. As Udo, Widmark appeared to be saying ‘why not have some fun with this part?’ Or, in the words of the Joker, ‘why so serious?’

Kiss of Death is released on DVD/Blu-ray on 25 July courtesy of Signal One Entertainment.