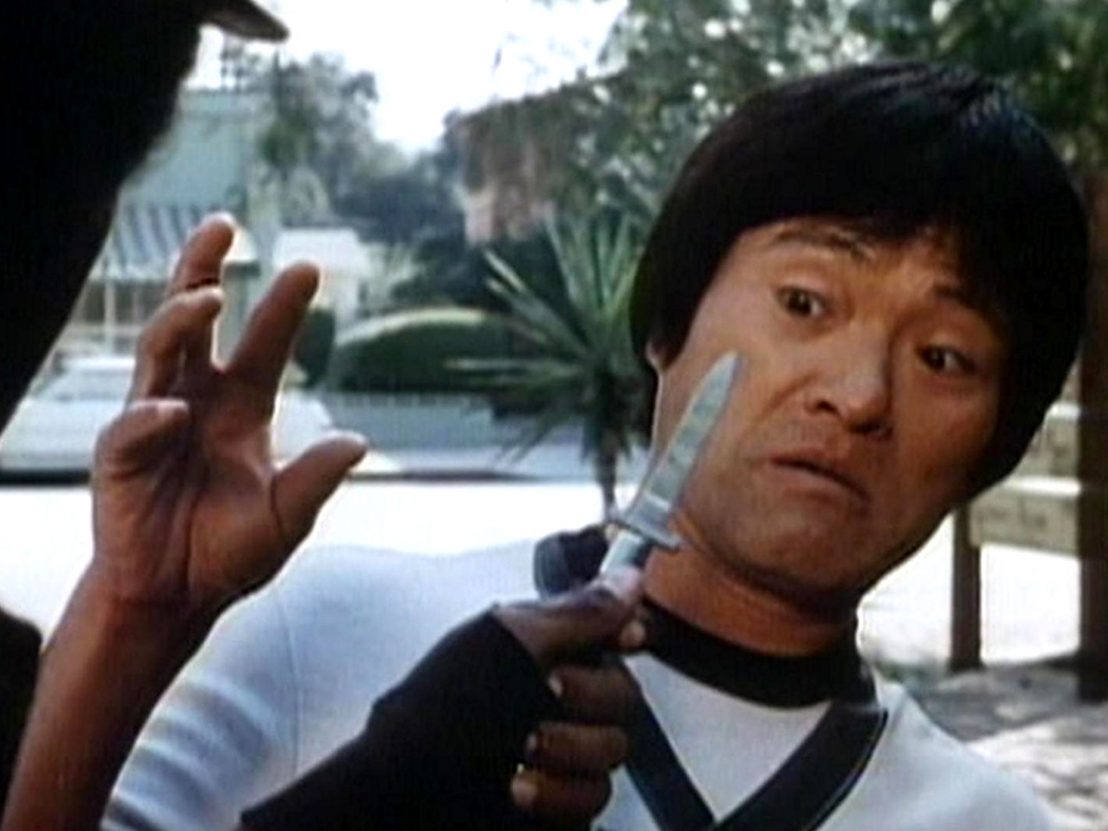 In 1973, Enter the Dragon made Bruce Lee the most popular Asian actor ever to cross over into Hollywood. In 1982, a full nine years after Lee’s death, another Asian performer finally followed in his footsteps. It was not Jackie Chan, a huge star from Hong Kong whose early attempts to crack the American market had fizzled out, but instead an actor/comedian who could be interpreted as a repudiation of everything Lee represented. He may not have been the breakout star that the Asian diaspora might have wanted, but Johnny Yune was the one they got.

The summit of Yune’s brief stardom, They Call Me Bruce?, makes its unlikely Blu-ray debut on 24 October via Kino Studio Classics. Based purely on anecdotal evidence, everyone of a certain age vaguely remembers it – the posters featuring a cartoon of Yune with crutches and the tagline ‘With a little practice… anyone can be as good as Bruce Lee!’, the TV commercials which claimed ‘He walked like him… he talked like him… he even looked like him!’, and the nonstop airings on HBO. It’s the kind of movie that’s so ephemeral and context-based that the Blu-ray should come with annotations.

Yune stars as an Asian cook of undetermined nationality who everyone insists on calling Bruce, though he has none of that famous martial artist’s prowess. He caters to Italian gangsters, who trick him into transporting “flour” (cocaine) across the country. Shenanigans ensue from Los Angeles to New York, and occasionally we get flashbacks to his grandfather, a typical Pai Mei-type also played by Yune.

Aping the rapid-fire Zucker/Abrahams/Zucker style, They Call Me Bruce? is a mishmash of movie parodies (The Godfather, Saturday Night Fever) and Asian stereotypes (Yune kneads dough with kung-fu and uses nunchakus as chopsticks), padded with references to then-current TV commercials (“I was once run over by a Toyota… Oh, what a feeling”). Primarily it’s a showcase for Yune, who is one of four credited writers and whose clunky one-liners mostly came from his stand-up act. His acting is so wooden and his jokes so bad (“I am a sex object. I always ask women for sex, and they object”) that you may actually find yourself occasionally chuckling.

Born in 1936 in a small township in South Korea, Yune travelled to the US in 1962 to enroll at Ohio Wesleyan University. He stuck around, trying his luck as a stand-up comedian in New York and eventually becoming a citizen in 1978. Yune was discovered in a Santa Monica comedy club by talent scouts from The Tonight Show with Johnny Carson, and in a time when Carson’s approval could launch a comedian overnight, he became America’s most visible Asian comic. The Tonight Show booked Yune a mind-boggling 14 times between 1978 and 1980. Seen today, Yune’s these appearances are fragments from a vanished world where American audiences were assumed to have little-to-no knowledge of Asian culture, and an Asian comedian in America was assumed to be performing to an entirely white audience.

Yune invariably greets the audience with an exaggerated “herro” and tells his leaden jokes in a deadpan monotone. He picks a lot of low-hanging Asian fruit: Korean figures like Reverend Moon (the cult leader who later served time for fraud) and Tongsun Park (the lobbyist accused of bribing Congress members to keep troops out of South Korea) are namechecked, and Yune delivers such groan-inducing lines as, “My friends told me if I talk to my plants, they’ll grow taller and fast. And I’ve been talking to my plants… they turn yellow.” When Carson asks he has studied kung-fu, Yune replies, “I once stepped in it.” Other jokes could have been cribbed from any dollar-store joke book: “Lincoln. I loved Lincoln. I could wait till I come to this country and drive one.

A 1979 appearance saw Yune promoting Sergeant TK Yu, a TV movie (presumably a failed pilot) about a Korean detective. In his interview with Carson, Yune reflected on growing up under an oppressive regime: “I remember my father said – I’ll never forget this – ‘A communist is someone who has nothing and is willing to share it with you.’” (For the record, it’s North Korea that claims to be communist, but 1979 did mark the beginning of eight years of martial law for the south.)

At one point, Yune says, “In communist country, you don’t watch television because television watch you,” anticipating Yakov Smirnoff, another immigrant comedian who appealed to Americans by flattered their sense of superiority. At the end of the segment, Yune reveals he is an accomplished singer, and delivers a commendable performance of “O sole mio.” The audience initially laughs, but quickly realise it’s not a joke. Seeing this was the only time I ever felt like I was seeing the real Yune.

They Call Me Bruce opened on 12 November, 1982 in a modest 165 screens, taking just over $1m from its opening weekend. Its $6,493 per-screen average was higher than the top-growing movie that week, George Romero’s Creepshow. It hung around theatres for four months, even expanding to 324 theatres in week eight. Its$16.9m gross made it a major success for its tiny distributor Film Ventures International, an Atlanta-based company best known for releasing a Jaws rip-off (The Last Shark) so blatant that Universal sued and won.

But Yune’s career was unsustainable: once you saw him, you saw him. The Tonight Show invitations dried up, and an in-name-only sequel, 1987’s They Still Call Me Bruce, passed with little notice. In 1984, Pat Morita – a familiar character actor best known for his role on TV’s Happy Days – became The Karate Kid’s iconic Mr Miyagi. He parlayed his Academy Award nomination into a string of Karate Kid sequels and straight-to-video action movies.

In the ’90s, Jackie Chan – who once acted alongside Yune in 1981’s The Cannonball Run – finally hit it big in the States with Rumble in the Bronx and Rush Hour. Watch his talk show appearances from 1996 and you’ll see him somersaulting onto Jay Leno’s couch, performing kung-fu tricks for David Letterman, and generally playing the part of the happy-go-lucky Asian. Before America could fully embrace him, even Jackie Chan had to play the role of Johnny Yune.