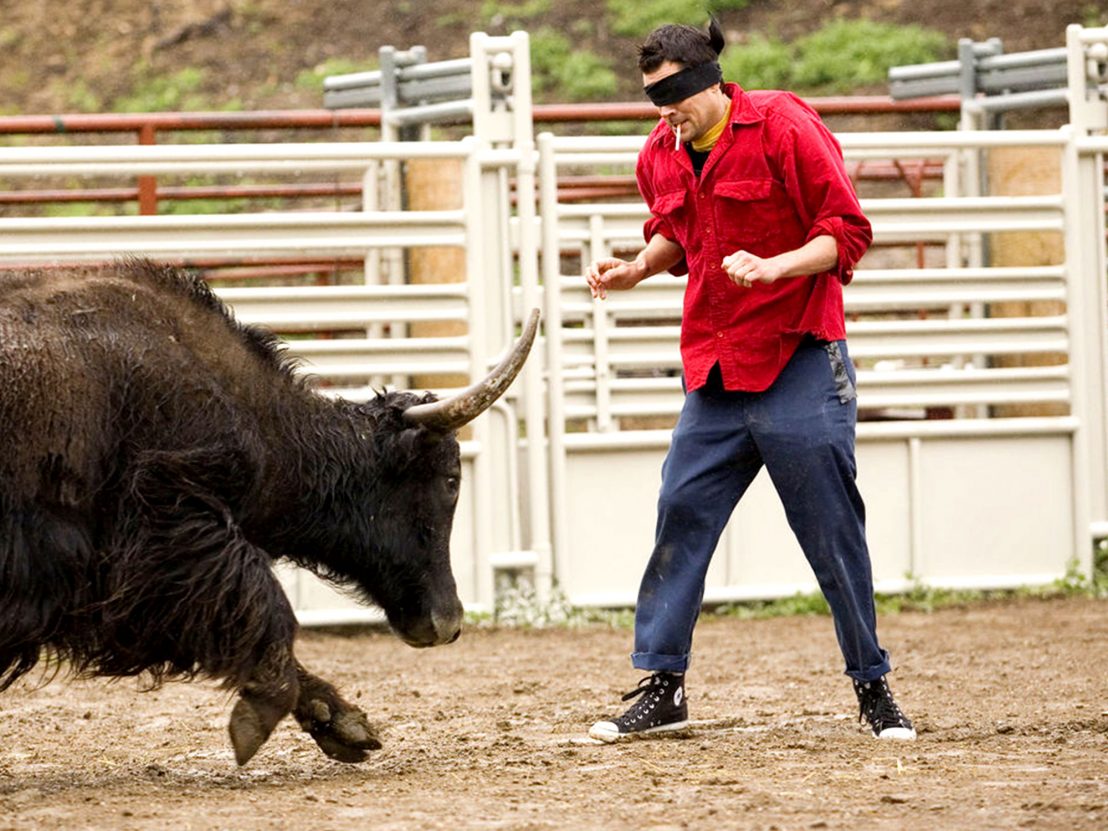 The final sequence of Jackass Number Two sees Johnny Knoxville playfully recreate one of Buster Keaton’s most iconic stunts: the sequence in which the front wall of a multi-storey house collapses to the ground surrounding Keaton, only leaving him unscathed because he is positioned perfectly so as to fit neatly through the open attic window. The filming of the scene was notoriously risky.

Keaton shot it in one take, with a real house, and if the measurements of the window had been off even by a few inches it would have likely resulted in serious injury, perhaps even death. Knoxville didn’t stop at imitating this famous piece of Hollywood lore though, he one-upped it. After safely making it through the window of the falling saloon, Knoxville is hit by a huge wrecking ball that knocks him violently out of shot.

This allusion explicitly acknowledges the debt the Jackass series owes to the great slapstick comedians of silent cinema, while also revealing something of its own distinct brand of comic spectacle. If the likes of Keaton, Charlie Chaplin ad Harold Lloyd similarly mined humour by placing the human body in harm’s way, they also granted the viewer relief by ultimately relieving this tension, leaving the performer unharmed. The dexterity of these performer’s bodies enabled them to get perilously close to danger while still being able to escape it at the last minute. The graceful body of the star thus appeared indestructible, almost superhuman.

Jackass, by contrast, is a study of the many ways in which the body can be tortured, maimed, degraded, desecrated. Blood, vomit, sperm, faeces and saliva are all foregrounded in a gleefully carnivalesque exhibition of grotesqueries: apples are dangled from buttocks to feed a hungry pig; a fish hook is pierced through a cheek; buttocks are branded with a red-hot iron. As the gang stage these absurd rituals, pushing against the natural biological functions of the human body, the implicit question becomes just how much pain can someone endure?

Jackass Number Two opens with a wide tableau of a placid, artificially constructed suburban street, with smoke coming to fill the screen in slow-motion. Out of the rubble emerge Knoxville and co, their costumed forms partially obscured by smoke, who proceed to run towards the camera. Ennio Morricone’s ‘The Ecstasy of Gold’ swells up as each cast member is introduced via a mock-heroic close-up. Finally, we see that they are being chased by a stampede of bulls. It’s a scene that literalises the positioning of the series as the violent unleashing of the American id within a repressed Western culture – the series creates a safe liminal space in which traditional social boundaries and conceptions of propriety are broken down in a series of absurdist, self-immolating acts.

In Jackass, pleasure is inseparable from pain, just as horror is intertwined with comedy (is it any coincidence that Knoxville’s laugh and scream sound almost identical?). Masculine honour is claimed through willingly facing great danger, enduring the resulting pain, then laughing it off. Every pratfall is punctuated by a graphic assessment of the gang’s wounds, which are proudly shown off like battle wounds.

Critic Fernando F Croce observed that the Jackass project can be seen as “new millennium reconfiguration of Mack Sennett”. Indeed, the delightfully simple structures of these films (essentially a string of self-contained skits, each lasting just a few minutes and introduced with the participating cast member plainly looking into the camera to state their name and the title of the segment) recalls the mechanics of early spectacle cinema as readily as circus freak shows. Added to this sideshow vibe, each stunt is performed in front of the other cast members, who actively laugh and wince and egg each other on. Ritual humiliation and searing pain is transformed into a series of giddily perverse performances, carried out in a series of private theatre spaces.

The appeal of the Jackass crew is largely down to their ability to appear simultaneously as complete buffoons and the smartest guys in the room. With their wide-eyed enthusiasm, relentless energy, effortless camaraderie and obsession with the scatological (despite seeming to be asexual), their development seems to have been arrested at the age of 12 or 13. The end credits montage of Jackass 3D, fittingly, sees the various members credited alongside their high school photos, suggesting the longing for the naive anarchism of youth that drives the jubilant atmosphere of the series.

Their brand of idiocy is less naive than Chaplin’s, less forlorn than Keaton’s, less fussy than Jacques Tati’s and less frenetic than Larry Semon’s – it’s closer to that of Jerry Lewis, another overgrown pre-adolescent. Indeed, the sketchbook quality of the Jackass movies recalls the late films of Lewis, which similarly craft scattershot collages combining the slapstick and the psychopathic, the exhibitionistic and the masochistic.

Because of the documentary nature of the shooting style, the Jackass visual aesthetic precludes rigorous, precise formalism. Each set-piece is captured by filling the space with as many cameras as possible (some consumer grade, some high quality), then piecing the footage together in post. The result – which favours texture over precision and visceral impact over coherence – is a Boschian maximalism, rapidly flitting between striking images and reaction shots with little regard for traditional notions of continuity editing and consistency of on-screen space.

The franchise started out as a micro-budget televisual curio, and the DIY quality of the stunts remained even while the budgets began to swell. Complex sets and contraptions are pieced together with staples, marker pens, cardboard and string. As the films progress, the increased scales devoted to such infantile ideas become part of the joke.