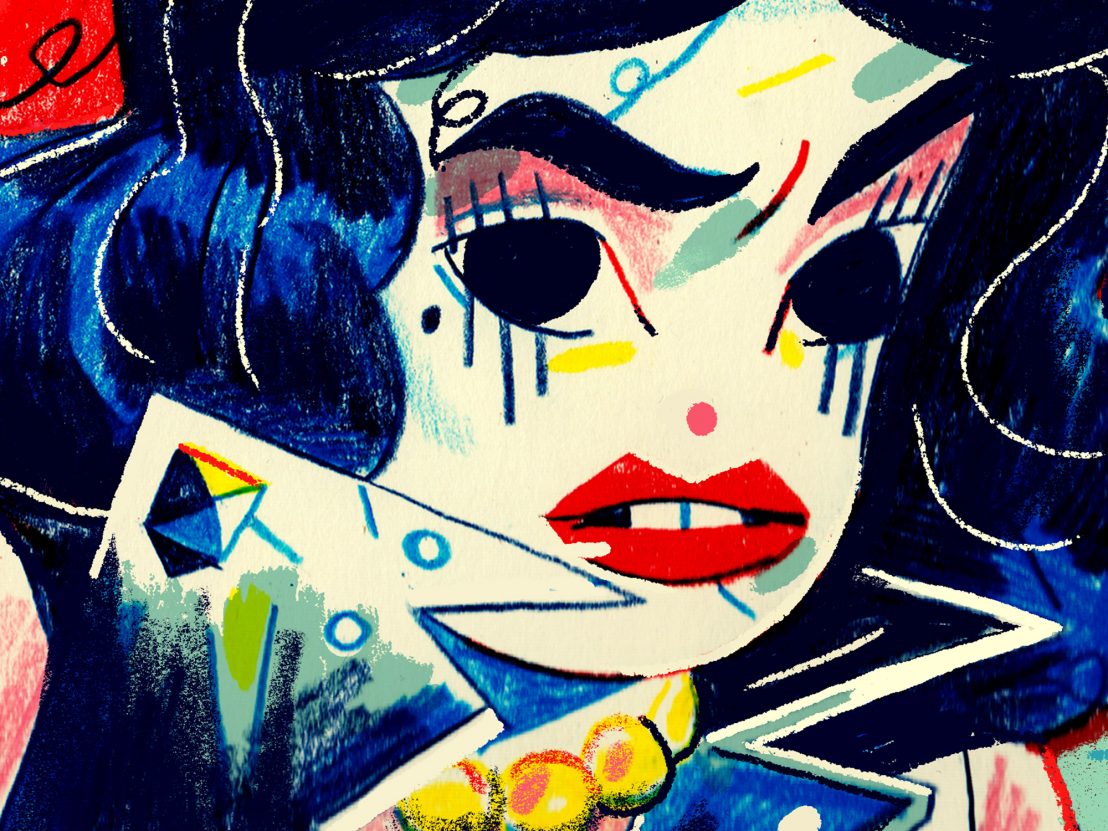 We all like to see people like us on screen. Cinema can show us any life, anywhere, in any reality. Distant worlds become tangible, and the impossible stretches wide before our eyes, but it’s often the smaller stories that most resonate with us. We feel the pull towards films with plots that run parallel to our own, with characters in whose footsteps we can follow.

Because the world of cinema is so huge and so reliant on capital, and privileged structures of promotion and distribution, films don’t always show us stories as diverse as the people who watch them, though. Dominant narratives tend to be white, straight, cisgender and good-looking, and many of us don’t see ourselves on screen until the film credits have finished and we glimpse ourselves dim and hazy in the black mirror of the dormant TV.

If you’re mentally ill and LGBTQ, this lack is particularly clear, but there’s also a strange distortion at play. Queer people are wildly underrepresented on screen; so too are mentally unwell people. And yet at the intersection of queer and mentally ill, we find a set of thriving cinema stereotypes that resurface time and time again, across eras, genres and styles. The trope of the ‘crazy queer’ is one that sits just as central to cinematic history as the gutsy ingenue or the misunderstood-but-valiant outsider nerd.

It’s a warping of our experiences, and one that seldom does justice to the realities of what it is to be a mentally ill person in the LGBTQ community. Here is an illustrated taxonomy of mentally ill queer (or queer coded) characters on screen – the good, the bad and the ugly.

I was giddy with excitement when I first saw Cruel Intentions, and of course I lingered longer than I maybe should have done on the scene where Sarah Michelle Gellar’s scheming, sociopathic Kathryn seduces hapless ingenue Cecile. This luxuriant, amoral, wicked world of rich New York teens, interrupted with flashes of queerness, was everything that was supposed to be awful with the world. I loved it.

This trope of single-mindedly dastardly queer women is one that reaches its gnarly fingers out far beyond just sexy teen dramas, though. Look at Peter Jackson’s 1994 psychological thriller Heavenly Creatures, where Kate Winslet and Melanie Lynskey’s intense, queer-coded friendship leads them to cold-blooded murder, in a reimagining of an infamous real-life crime. Monster also draws inspiration from true crime in its portrayal of serial killer Aileen Wuornos, showing the mental illness and trauma that sent Aileen spiralling towards fatal brutality.

If Monster is a film that hints at the humanity of its subject, then Basic Instinct provides the blueprint for the exact opposite: the queer woman murderer, whose coded psychopathy manifests as a kind of seductive femme fatale caricature. While Sharon Stone’s character famously wears no pants in one notorious scene, her on-screen girlfriend represents a different kind of queerness: the aggressive, gutsy foil to Stone’s sex-led slyness. Their relationship is tempestuous; their sexuality is fraught. Predictably, it’s men who suffer their wrath.

But don’t give up on your crime-filled queer dreams just yet! In queer classic Bound, we see a heartier alternative to these stereotypes. Directed by the transgender Wachowski sisters (who went on to direct The Matrix trilogy), it’s a sultry neo-noir thriller that puts a same-gender relationship at the heart of an organised crime storyline. Though their conniving is framed as a kind of sociopathy, the women’s personalities are rich and vibrant and full. Set It Off is another great example of this, with Queen Latifah’s bolshy and brilliant Cleo going to show that butch queer women can channel a very masculine anger, while having kind hearts, great minds and good friends. Watch and learn.

It’s not always easy to look evil in the eye. In lots of films, particularly children’s films, this means subverting the straightforward concept of aggression, and casting villainous characters in a slightly different, less intimidating light. This means stripping away macho violence, and bringing in a glitzy, glam, unconscionably evil camp villain.

Take Scar, for instance, Simba’s cruel uncle and wannabe ruler in The Lion King. His lilting drawl, effete mannerisms and cowardliness are all ways of hinting at queerness. Conveniently, these traits position Scar as a complete negation of the hyper-masculine stolidity that Mufasa embodies. Scar is weak and angular, Mufasa is broad and brave; Scar is caught up in narcissistic, ritualistic excess, Mufasa is a martyr.

Look at Jafar, too, in 1992 Disney classic Aladdin and even, more recently, Tamatoa, the villainous crab in last year’s hit film Moana. To a Lin-Manuel Miranda soundtrack, Tamatoa spins exuberantly around his lair, the treasure encrusting his back sparkling like a giant disco ball as he sings and waltzes into the camp villain history books.

Watch Rocky Horror Picture Show, however, and you can find a clever play on these age-old ideas. This isn’t a queer-coded villain in a heterosexual world: instead, two supposedly heterosexual victims are thrust into a raucous, fantastical, evil world of queer debauchery. It’s as camp as camp can be, and it’s these openly queer villains in charge.

“I just don’t want your life to be any harder than it has to be.” This is something that countless queer people will have heard in response to their coming out, often from the people closest to them. Contained in this cliché is the assumption of a tragic narrative: to be queer is to be sad, and if you can avoid it, you should. It’s little surprise that misguided friends and family take this approach when so many of the stories we’re fed about queerness are ones that centre depression and mental ill health.

Even in Little Miss Sunshine, which is by all accounts a perky and optimistic look at being an outsider in a pristine world, we see this kind of storyline unfold. One outsider is Dwayne, whose existential teen angst leads him to a self-punishing vow of silence, and then there’s Olive, whose pot-belly and speccy awkwardness leaves her on the fringes of the beauty pageant world. But most memorable, for me, is Frank, the depressed gay uncle and Proust scholar, whose bandaged wrists point to his suicidal dejection, and whose gayness is at the heart of that melancholy.

In A Single Man, depression again takes centre stage, with a day in the life of Colin Firth’s abjectly sad George, a middle-aged college professor whose partner died less than a year before. Drifting through his day, furnished by director Tom Ford in a sumptuous mixture of aestheticism and sadness, he sinks helplessly into the past, pushes hard against those around him and struggles to confront the reality of his pain. As is the trajectory of so many queer films, even in his moment of clarity, George’s story flies inexorably towards tragedy.

Not all films that depict mentally ill queer characters make an effort to illuminate the ways in which a homophobic society – not queerness itself – might be responsible for catalysing and reinforcing these mental health problems. Show Me Love (also known as Fucking Åmål) is a Swedish film that goes some way towards remedying this lack. A gentle, ambling exploration of the lives of two queer teen girls in small-town Sweden, it hints at the ways that Agnes’s depression and self-harm might be traced back to the isolation and anxiety she feels as a bullied, not-yet-out young person.

Transgender people have a long and troublesome history of their lives being instrumentalised to represent ‘craziness’ on film. Before transgender rights and realities had begun to gain traction in the mainstream, Alfred Hitchcock’s 1960 horror classic, Psycho, set the tone. Norman Bates is the film’s eponymous psycho, with his cross-dressing and his predatoriness portrayed as two sides of the same psychopathy. We are supposed to fear him not so much because of what he’s capable of, but what he is: a person split along lines of gender and sanity, and whose inner ugliness leaks out of all the cracks in between.

The Silence of The Lambs picks up where Psycho left off, when it comes to transgender identities being used as a shorthand for insanity. Here the link between transgender lives and violence is drawn even more explicitly, though, with the film’s elusive serial killer fashioning a kind of ‘suit’ out of the skin of their female victims. This violence is a surrogate for the formal sex reassignment surgery denied to Buffalo Bill some years prior. There’s no equivocation between gender transition and violence: transgender lives mean surgery, and surgery is butchery, we’re told.

It’s not just transgender people who have had their identities made symbols for madness. To drift into the world of TV for a moment, take a look at Willow’s journey from sweetness to unmitigated evil in Buffy the Vampire Slayer, conveniently concurrent with her burgeoning queerness. Something similar happens in Black Swan, too, as darkness ripples around Natalie Portman’s troubled Nina and her bisexuality blooms.

This is an extract from Do What You Want, a zine about mental wellbeing, raising money for mental health charities.