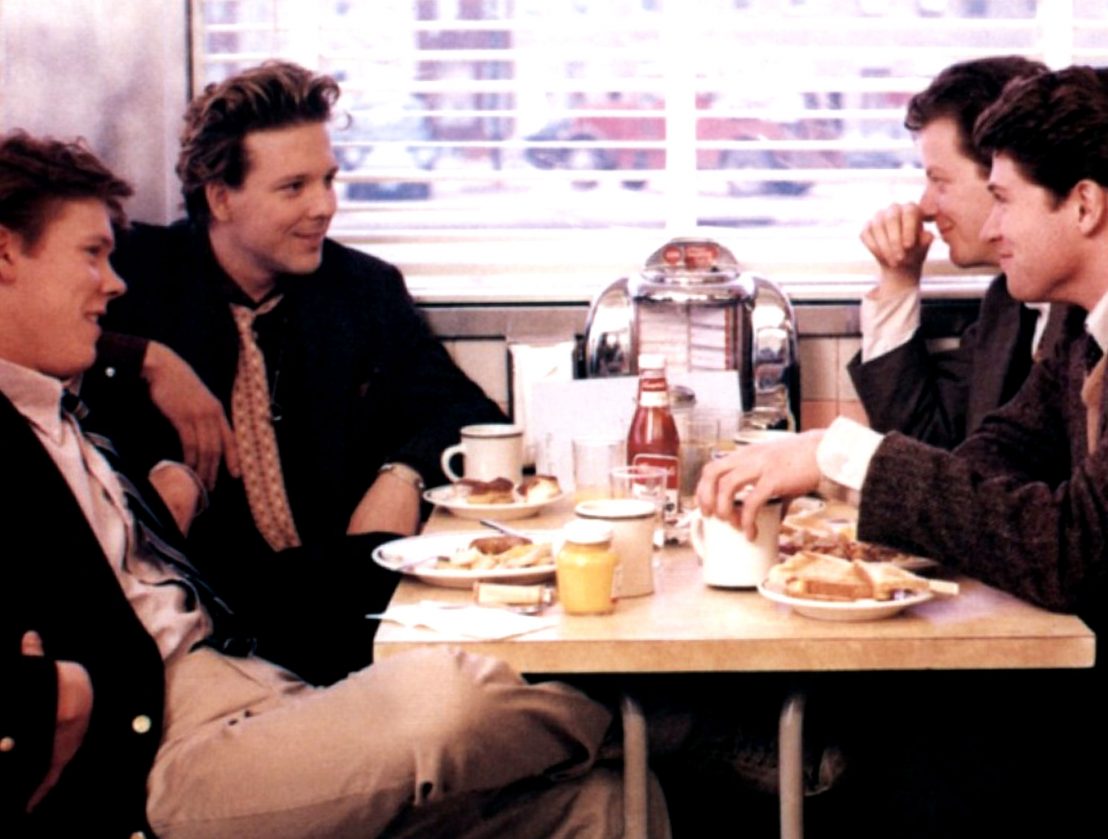 The Fells Point Diner is a gas station postcard come to life, as American as an apple pie cooling on a window sill. Surrounded by a forecourt of Buicks and Dodge Coronets, it’s a place of ritual in 1950s America where hearty food and warm small talk come to hang out. In Barry Levinson’s 1982 film Diner, the eponymous eatery becomes a formative space where his young adult protagonists come-of-age over coffee and gravy fries.

Their conversations, often improvised as per Levinson’s script, are concerned with the small details that make life interesting, simply enjoying each other’s company as they shoot the breeze. Levinson’s characters come alive through dialogue; it’s when they are speaking about the most inconsequential of things that they feel most real. The precedent set by Diner found its heir apparent in Quentin Tarantino, a filmmaker who similarly delights in the minutiae of American life.

One of Diner’s most memorable scenes, ironic considering its trivial subject matter, is an exchange between Modell (Paul Resier) and Eddie (Steve Guttenberg) regarding Frank Sinatra and Johnny Mathis. “Okay, let me ask you this then,” Modell says with a smirk, “when you make out, who do you make out to? Sinatra or Mathis?” Eddie looks at him from across their usual booth, a plate of his signature dish – gravy and fries – before him. “That’s a stupid question. I won’t answer it.” He pauses, then concedes: ‘Mathis.” This scene is a delightful testament to the chemistry between Levinson’s cast, who not only feel real and compelling as individuals but also collectively as a group of lifelong friends.

This interaction, in all its wistful simplicity, provided the blueprint for Tarantino’s own take on diner-dialogue in the opening of his 1991 debut, Reservoir Dogs. The heated debate about how to interpret Madonna’s ‘Like a Virgin’ effectively becomes the R-rated response to Eddie and Modell’s exchange. Tarantino’s characters interrupt one another, bicker and joke, all in the familiar environs of an American diner. Like Levinson before him, Tarantino relies on rapid-fire, meandering dialogue to give shape to his characters, which is arguably even more important in a film where anonymity is the central motif.

The parallels don’t end with the dialogue, however, as Tarantino’s use of music in Pulp Fiction also harks back to the energy and youthful spirit of Diner. Dancing the twist to Chuck Berry seems like it was lifted straight from the Diner songbook (which actually does exist, as Levinson has planned for a musical adaptation for some years), and Jack Rabbit Slim’s is itself a neon-hued pastiche of ’50s ephemera. The scene bears all the hallmarks of Levinson’s film, especially when compared to Eddie and Billy’s (Tim Daly) late-night moment of musical inspiration in a strip club.

With the arrogant air only a drunk teenager could muster, Billy denounces the jazz band in the corner for their languid playing and demands something more energetic. Rolling up his sleeves, he staggers to the piano and begins playing a classical number. Eddie, along with the other guests, roll their eyes and cringe. But then the tempo increases, and Billy launches into frenetic ragtime piece with a cocksure grin. The band behind him follow suit, and its not long before Eddie is up on the table dancing. Levinson inclusion of music in his youthful narrative becomes an outlet for his character’s private anxieties, just as Vincent Vega and Mia Wallace similarly cut loose in Tarantino’s most famous scene.

Music and dialogue are the key tenets of Levinson’s oeuvre, and Diner is the ultimate marriage of the two. The camaraderie between Diner’s central young men is built on mindless chatter and singing along to Sinatra in the wee small hours. Tarantino may not offer up the same twee slices of daily American life as Levinson does, but Reservoir Dogs and Pulp Fiction both demonstrate a clear artistic borrowing by the director.

Tarantino’s early films deal with American life and its insidious mundanity. Whether through moments of criminal violence or a mere visit to a restaurant, the iconography of America is always present. His characters come packing .45s and crude quips about women, equally ready to shoot up a restaurant as they are to dine in it. By contrast Levinson’s protagonists arm themselves with a hot mug of coffee and a mental itinerary of their record collection. Their stories are separate, but their worlds are one and the same.