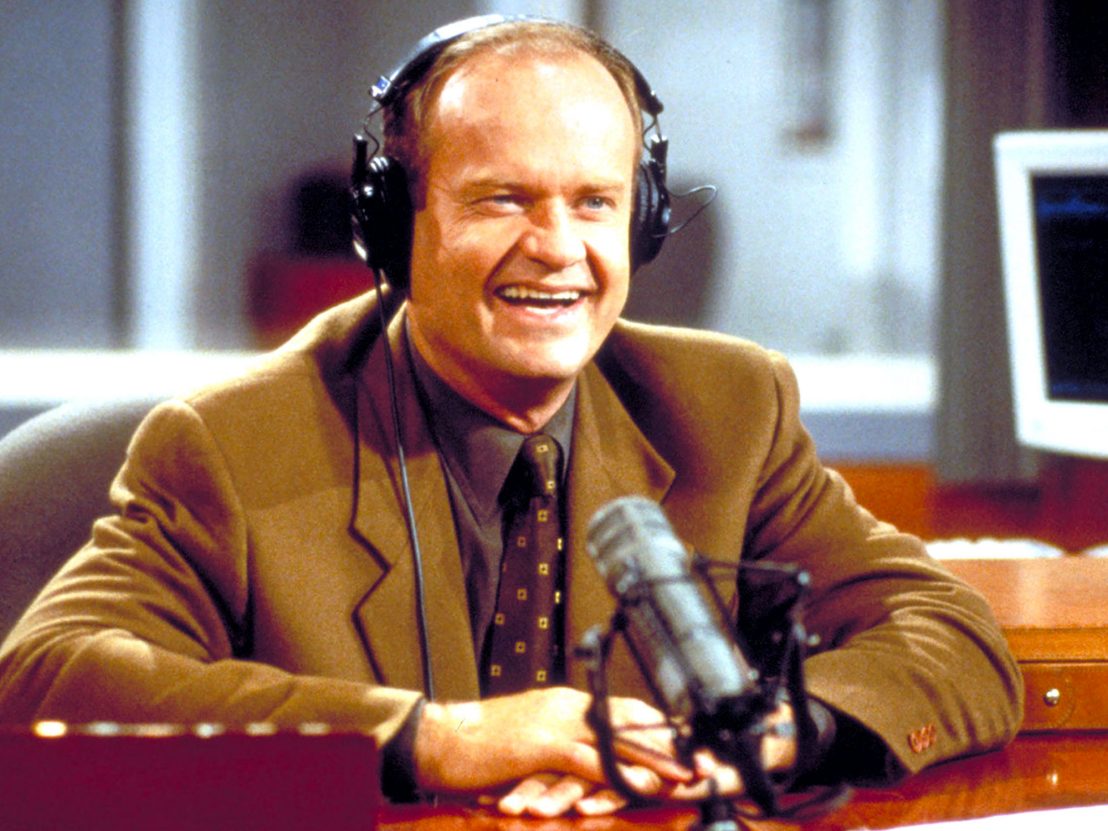 It’s been 25 years since Dr Frasier Crane, eminent psychiatrist, Seattle socialite and collector of African fertility statues, appeared in the pilot episode of Cheers spin-off, Frasier. What is it exactly about the effete, pompous Doc that resulted in a record-breaking 37 Emmy awards? And why does Frasier remain the gold-standard of ’90s sitcoms, two and half decades on?

“For 11 years, you’ve heard me say ‘I’m Listening.’ Well, you were listening too. And for that I am eternally grateful.” Crane’s closing address to his loyal radio listeners at KACL, where he has dispensed bite-size psychiatric advice for over a decade, is perhaps the most touching fourth-wall break in sitcom history. Here is a man whose life has been documented for 22 years, from his humble beginnings as an East-coast therapist and Bostonian bar-fly, to his residency as Seattle’s most famous doctor. We’ve seen him endure two failed marriages, innumerable disastrous first dates and, occasionally, something akin to true love. And so it is that Frasier Crane – or rather Kelsey Grammer – thanks us for watching.

Initially just a raindrop in the deluge of ’80s and ’90s US sitcoms, Frasier’s
success as a spin-off of all-American favourite Cheers initially seemed unlikely. The established dominance of shows like Seinfeld, the poster-child of sitcom perfection, left little room for competitors in the mid-’90s – and what more was there to say about a supporting, albeit popular, character from a now finished show? Frasier remained oblivious to these red flags, showing up in 1993 with a charm and confidence that set its gilded wheels rolling.

Frasier’s premise has always been cosily straightforward and decidedly uncontroversial. Returning to his hometown of Seattle after a brief affair with East Coast life, the unlucky-in-love psychiatrist finds himself sharing a luxurious apartment overlooking Puget Sound with his cantankerous ex-cop father (John Mahoney) and his live-in health care worker Daphne Moon (Jane Leeves). Frasier finds himself balancing this tense home life with his celebrity career as a radio psychiatrist, as well as navigating the pitfalls of Seattle’s upper crust with his equally pretentious yet loveable brother, Niles (David Hyde Pierce). That, in a nutshell, is Frasier’s world. Yet across its 264 episodes, in the hands of creator David Angell, showrunner Christopher Lloyd and a slate of great writers and performances, Frasier staked its claim as one of the defining sitcoms of its day.

But the show’s success wasn’t confined to boxy, ’90s TV sets. The so-called ‘Frasier Effect’ hit the Pacific Northwest with an unprecedented wave of tourism and urban migration, with thousands of people pouring into Seattle and the surrounding residential centres to live the life of the good doctor. Sipping champagne on balconies in the shadow of the Space Needle, cavernous living rooms decorated with bespoke furniture, a weekly schedule chequered with symphony visits and museum openings. This was the lifestyle Frasier had established through its subtle world building, a whole country apart from the blue-collar environs of Sam Malone’s New England drinkery. “Condo by condo, Seattle has become a lot like Frasier,” Kay McFadden observes in her 2004 Frasier obituary published in The Seattle Times. Frasier did so much more than simply entertain audiences during its 11-year run – it explored class divisions, rife then and now in American society, privileged quality writing over lukewarm pop-culture quips, and breathed new life into the humble and unassuming Pacific Northwest. 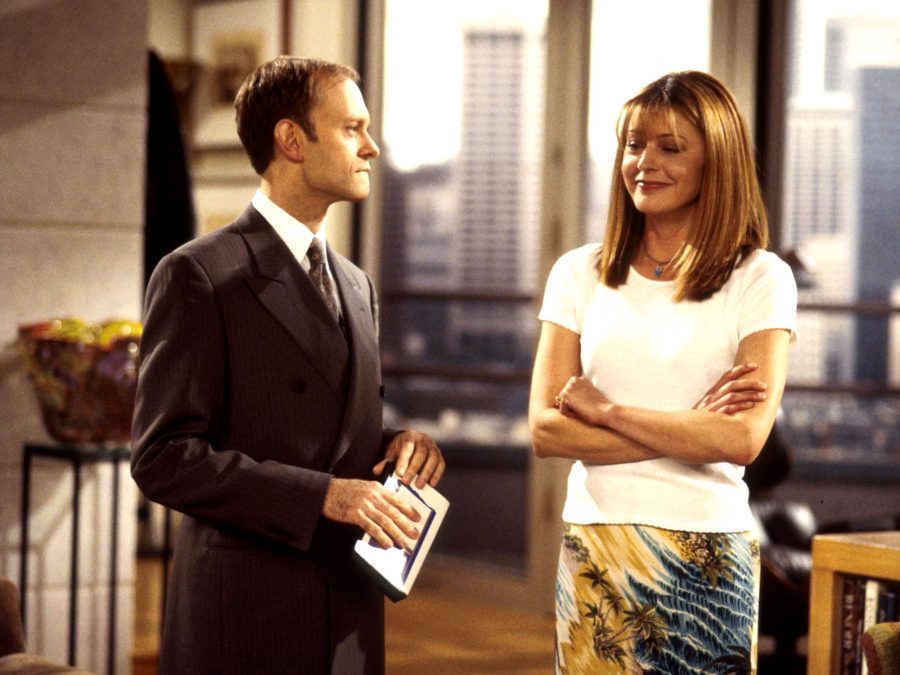 So much of Frasier’s appeal lies in the performances of its central quintet: Frasier, Niles, Martin, Daphne and Frasier’s producer and confidante, Roz Doyle (Peri Gilpin). For every snooty ambition or snide pretension harboured by Frasier and Niles, there is always the homespun, blue-collar advice of their family to bring them firmly back to terra firma. For every failed relationship – and, as is so often the case with sitcom leading men, there are many – there are Roz’s promiscuous stories of a carefree single life. And then there’s the relationship between Martin Crane and his two sons, frequently the focus of each episode’s denouement and which taps into the heart-string tugging found so readily in the ’90s sitcom blueprint.

John Mahoney’s performance as the coarse-but-caring father, who seems cut entirely from a different cloth to his fois gras-munching offspring, is one of the show’s greatest strengths. He is the necessary tonic to Frasier and Niles’ expensive and disastrous follies, the antidote to their often toxic desires to be seen and known by Seattle’s elite. Without him, Frasier and Niles have no barometer by which they can measure their own foolish antics. The show’s title and premise might suggest a singular focus, but make no mistake – Frasier is first and foremost a show about family.

It’s hard to pinpoint exactly where and when Frasier stopped being the comfortable cigar-lounge annex to Cheers’ well-loved bar and became its own penthouse, setting the lofty heights to which contemporary and future apartment-set sitcoms strived. The show’s blend of farce, evocation of stage play traditions and refusal to dilute its erudite references all kept it firmly in pole position during its initial run. Classic episodes such as ‘Ham Radio’, ‘The Matchmaker’ and ‘My Coffee with Niles’ each play around with the tropes and taboos of the sitcom canon, everything from single-setting stories, self-reflexive studies of Frasier’s unquestionably white demographic, to deconstructing homosexual stereotypes.

These themes are littered throughout the very best episodes of contemporary sitcoms, with Frasier’s signature take on them resonating well into the new century. Indeed, the show has found new fans through the binge-watch culture of the streaming age. There are even dedicated online communities that listen to Frasier exclusively to get to sleep, who jokingly refer to themselves ‘Frasier Sleepers’. Frasier has spawned memes, subreddits, cookbooks and even academic publications. Along with the abovementioned episodes, ‘The Innkeepers’, ‘Mixed Doubles’ and ‘Dinner Party’ are all regarded as classics in their pwn right. But there is arguably no finer episode in the show’s history than season five’s ‘The Ski Lodge’.

The premise, as usual, is devilishly simple. Roz, pregnant and unable to attend a recently won holiday, bestows Frasier with tickets for his family to attend a free ski weekend at a mountain resort. A luxury chalet nestled in the mountains? A handsome French ski instructor to show them the ropes? Late-night mugfuls of Martin’s signature hot buttered rum? This is the recipe for arguably the finest episode of farce ever aired. Accompanying the usual cast of Frasier, Niles, Martin and Daphne are the latter’s attractive, amorous friend Annie and rugged Olympic ski champion, Guy. Although no actual skiing takes place on this weekend retreat, a slalom of a different kind soon gets underway. With each character secretly lusting after another in a veritable Penrose-staircase of passion, and Martin obliviously doling out his alcoholic lubricant, the episode descends into a hormonal haze of bedroom-hopping, generating enough body heat to melt the surrounding slopes.

Yet it’s more than just farce and satire that gave Frasier its edge. It had heart, more than any sitcom of its time. That’s because so much of Frasier’s premise is rooted in family ties and the feeling of coming home, whether it’s Frasier returning to Seattle after many years away, or simply knowing that he has an apartment filled with family and friends to fall back on when the going gets tough. Thomas Wolfe famously wrote ‘You Can’t Go Home Again’, a novel that details the irreversible damage of leaving one’s hometown and then expecting everything to have stayed just so when finally returning. In season three of Frasier, writers Linda Morris and Vic Rauseo penned ‘You Can Go Home Again’, in which Frasier recounts his rather fraught first encounter with his father upon moving back to Seattle. The moral of this episode is simple: Frasier was right to come home, even if it at first he felt lost, alone, and, dare he say it, older. Home always finds a way to pull us back.

Twenty-five years on, Frasier remains a home of sorts for so many of us. It’s the show that makes jokes about Le Corbusier, about Puccini’s operas, about Eames lounge chairs. It never condescended. It never sold out. It never shied away from the fact that comfort and cosiness were two of its biggest draws. It showed us that sitcom humour can be more than cheap gags and anachronistic gender stereotyping. That it could actually have heart, soul, something to say. When he alights, back home, in the Emerald City, Frasier quickly finds that people and places alter with our absence. Hair gets greyer, old stomping grounds get boarded up, relationships need renewing. But that’s why we come home, time and time again. Because regardless of how much changes, there is some part of us still eternally bound to its ebb and flow. Great TV shows don’t change, though. They’re forever.