A cinema is paying tribute to sinister screen bunnies this Easter

Donnie Darko, Inland Empire and more are screening at Cinémathèque Québécoise this weekend. 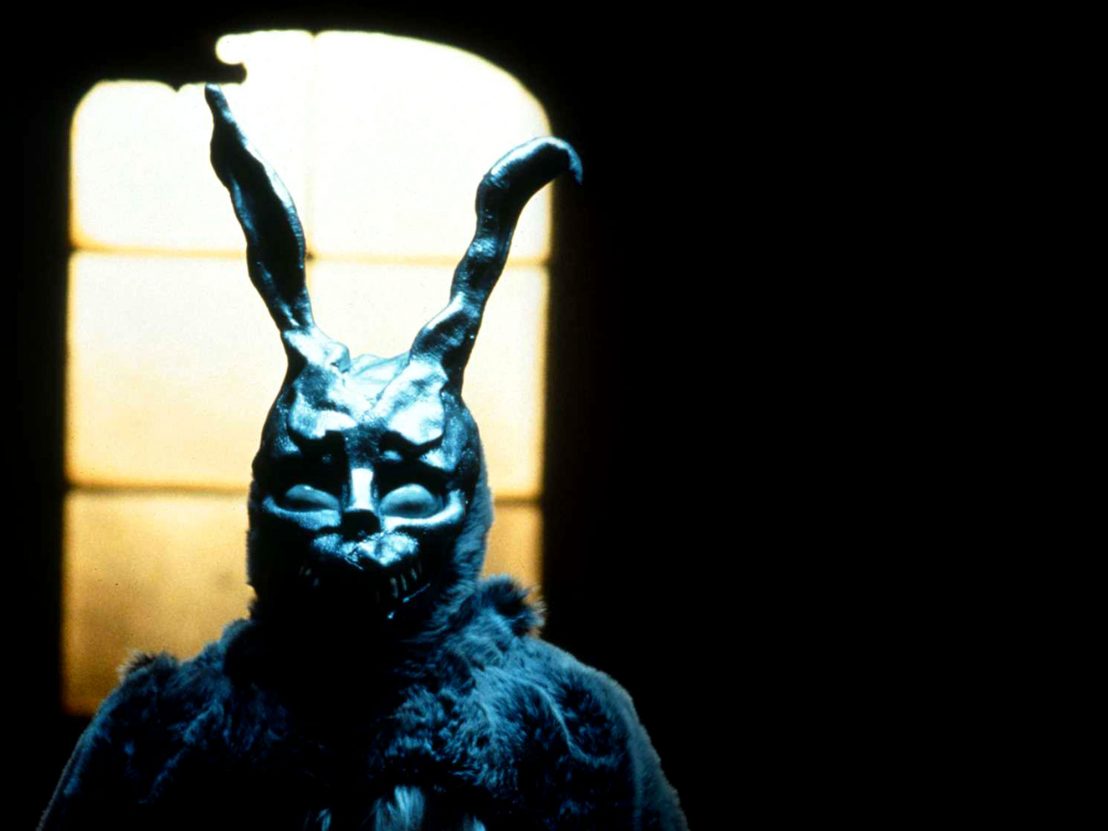 In the dark era before the internet, the Easter Bunny was more than just a cute character who brought children colourful eggs. Due to their confusing reproductive anatomy, in the Middle Ages it was a commonly held belief that rabbits were hermaphrodites (they’re not) and they had the ability to have a “virgin” birth (that’s not how it works). In spite of this veneer of purity, rabbits were also associated with fertility, hence the expression “breed like rabbits,” so they became a kind of two-tier symbol of virginity and copulation, which of course, made them a natural mascot for the crucifixion and resurrection of Jesus Christ.

Rabbits seem to embody certain contradictions. They exist between two worlds, wild and domesticated, fertile and virginal, adorable and horrifying. In the world of cinema, the possibility that the gentle, cautious and cute outward appearance often conceals dark secrets. With that in mind, programmers at the Cinémathèque Québécoise have put together an Easter weekend programme called Disquieting Rabbits (Inquiétants Lapins), covering a wide range of films includes Donnie Darko, Inland Empire, Gummo and Wallace & Gromit: The Curse of the Were-Rabbit.

In films like Monty Python and The Holy Grail, the fragility of the white rabbit is played up for a comedy twist. On the quest for the holy grail, the Knights of the Round Table run into a number of adversaries but none quite as formidable as the deadly Rabbit of Caerbannog, a tiny blood-thirsty rabbit that leaves a pile of bodies in its wake. With a little less blood, Wallace & Gromit and the Curse of the Were-Rabbit imagines a scenario in which a town is terrorised by a monstrous overgrown rabbit. Even the popular children’s novel, Bunnicula, pokes fun at the idea of a monstrous rabbit, by featuring the titular rabbit as a vegetable sucking vampire bunny.

Yet, in the world of creepy bunnies, the more haunting examples toy with much more sinister connotations. In Harvey, James Stewart plays Elwood, a middle-aged eccentric whose best friends is an invisible 6’3” rabbit he believes is a Celtic mischief spirit called a hooka. For obvious reasons, his family and friends worry that he may be suffering from mental illness and try to get him some help. Elwood even has a portrait painted of him with Harvey, and rather than a realistic rabbit, he looks like a man in an Easter Bunny suit. Harvey is not just some giant rabbit though, according to Elwood he can stop clocks and travel through space and time. The film is largely played for laughs, one of the few entries in the rabbit demon comedy sub-genre.

Harvey never speaks for himself in the film, in fact, we are never quite sure he exists. While Elwood sees him as a source of comfort, in reality, if Harvey is real and possesses the powers that Elwood claims, we’re dealing with an altogether different kind of movie.

Donnie Darko, which has an ever-shifting reputation as a great work of emo-pop horror and outright trash, features one of the most infamous examples of horrifying large rabbits. In fact, when people think of creepy rabbits – most people imagine the faux-rabbit suit dressed up with a disconcerting mask and very un-bunny like teeth. Within the film, not unlike Harvey, Frank the Rabbit serves as an invisible guide to Donnie, telling him early in the film that the world will be ending in 28 days, six hours, 42 minutes, and 12 seconds. Throughout the film, Frank’s appearances inject a sense of corruption into Donnie’s life and he seems to be an agent of chaos, driving Donnie down a dark road. While the film’s ending partially vindicates Frank, his presence remains haunting and uncomfortable: his mere presence in Donnie’s life serves as a disrupting agent that reveals a fractured and unstable reality.

Frank the Rabbit is quite obviously a man in a suit, which seems to be a repeated trend within the sub-genre of disconcerting rabbits. It applies in varying degrees to Harvey, Gummo and Lynch’s Inland Empire. It’s a strange quirk that plays into childhood visions of rabbits being most popularly seen as mascots for Easter. These interpretations reach into nightmares of youth, where the line between suit and man is not easily defined, as it taps into the monotone emotional range of most animal costumes. These are not rabbits, but rather people dressed up as them.

In this sense, Jan Švankmayer’s Alice remains something of an exception. Unlike some of the previous entries, the rabbit is not necessarily quite as evil or demonic, though it definitely gives off the creeps. Švankmayer uses a taxidermied saw-filled rabbit with some bulging eyes, which is enough to haunt your dreams for a little while. Alice itself takes on the idea of childhood innocence, sifting a popular children’s book, as a domestic nightmare. The white rabbit becomes our initiate into wonderland, which is more hell than paradise. Švankmayer’s depiction of wonderful portrays it as an authoritarian and cruel autocracy, a twisted mirror vision of the real world.

While we may imagine rabbits as harmless balls of fluff, in the realm of cinema you don’t have to cut very deep to find a twisted perception of them. The diversity and variation in dark rabbit interpretations are truly remarkable, especially considering how they seem to run across so many eras, styles and experiences. While rabbits still have a fairly sunny reputation, it might be time to consider that they might have something to hide. If you’re into a more secular Easter experience, maybe this year gather the family around to watch Harvey or Donnie Darko. If as adults we are chasing that magical feeling of celebrating holidays as a child, what better way to usher in the spring than to revisit the horror of adults wearing creepy rabbit suits.