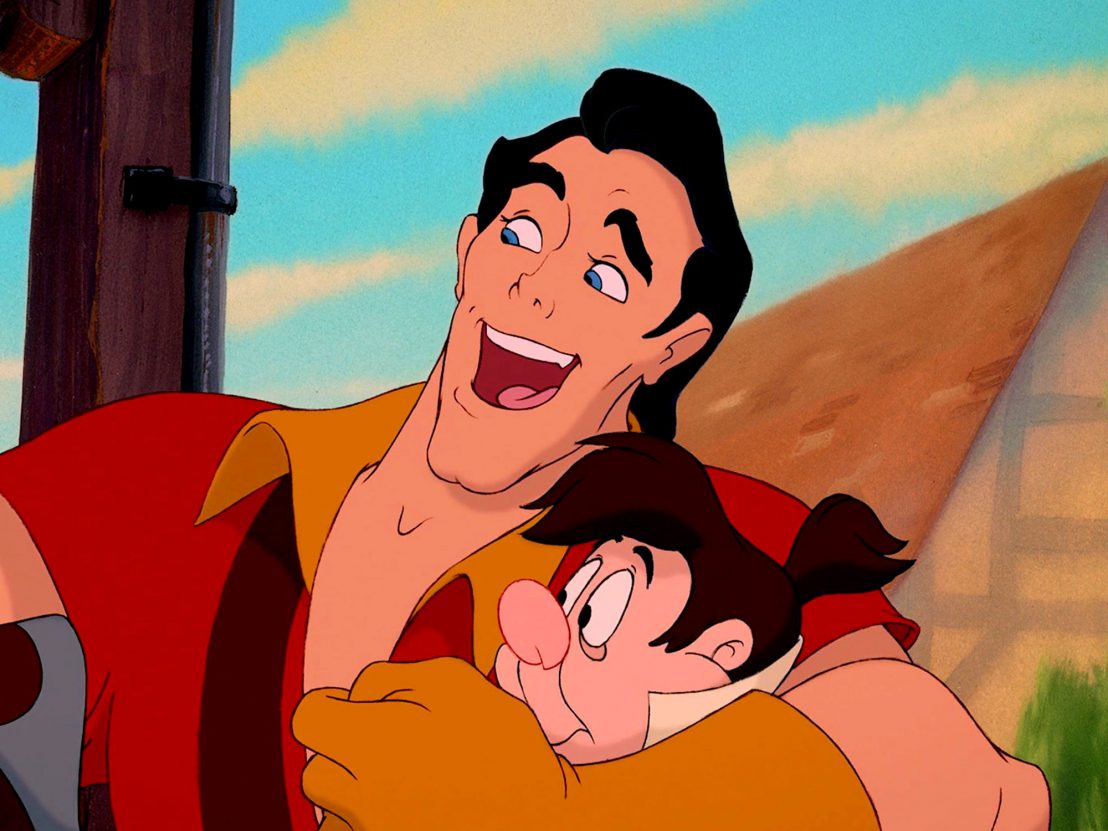 In a world where people are still persecuted for who they fall in love with, Disney narratives can act as a beacon. Indeed, removing gendered pronouns from tales of headstrong young protagonists who are labelled “odd” simply because they are different opens up the traditional Disney fairy tale to pretty much any LGBTQ+ subtext. The idea of breaking free from society’s restraints, and being accepted for who you are, is something the LGBTQ+ community sees reflected in their everyday struggle for acceptance.

Of course, Disney films are gendered, and up until very recently they have never strayed from heteronormativity. Which is why director Bill Condon’s remarks about an “exclusively gay moment” in Beauty and the Beast have caused such a stir. Although this gesture of inclusivity is a cause for celebration for many (at least outside of ultra conservative circles), it serves to highlight the absence of openly gay characters in the studio’s back catalogue.

Condon’s comments relate specifically to LeFou, Gaston’s schlubby sidekick. Except it has always been possible to interpret the character as gay, because when Disney’s animators originally brought him to life back in 1991 they did so using “queer coding”, which refers to the process of attaching stereotypically gay characteristics to certain characters without explicitly stating their sexuality.

LeFou constantly fawns over Gaston. When he sings “no one’s got a swell cleft in his chin like Gaston,” we can read this as his way of attempting to pick up a lover who is “down in the dumps”. And he’s not the only Disney sidekick who is coded as gay: Wiggins, Governor Radcliffe’s servant in Pocahontas, skips everywhere, makes gift baskets and even routinely dresses his master. Radcliffe’s obesity and dramatic demeanour juxtaposes the heroic John Smith’s physical prowess and brooding personality.

Read our review of Beauty and the Beast

Various Disney villains can be readily associated with the studio’s use of queer coding. They are often sassy, with lithe bodies and sharp cheekbones. If James Woods’ Hades wasn’t busy taking over the world, he’d be the gay best friend in a romantic comedy. He drinks Cosmopolitans and reminds Meg that Hercules will leave her because “he’s a guy!” Even Scar, a male lion, practices his curtsy and exists on the pride’s fringes because he lacks the alpha attributes of Mufasa.

It’s the same for female villains, too. In Snow White and the Seven Dwarfs, the Evil Queen preys on the eponymous heroine’s beauty so that she can become “the fairest of them all”. She fits the cruel and erroneous stereotype that lesbians love other women out of jealousy or because men rejected them. This kind of queer coding is not accidental. As Elizabeth Bell reveals in her seminal essay ‘Somatexts at the Disney Shop: Constructing the Pentimentos of Women’s Animated Bodies’, the process of animation – of layering multiple images over one another – doesn’t allow for coincidences.

Coupled with the studio’s devotion to heteronormative relationships, the queer coding of Disney villains reveals that there may in fact be a troubling agenda at play. Happily Ever After only seems to apply to straight couples. In Disney movies, it is implicit that heterosexuality is right and homosexuality is wrong because it is the villains who attempt to prevent the prince and princess from being together. 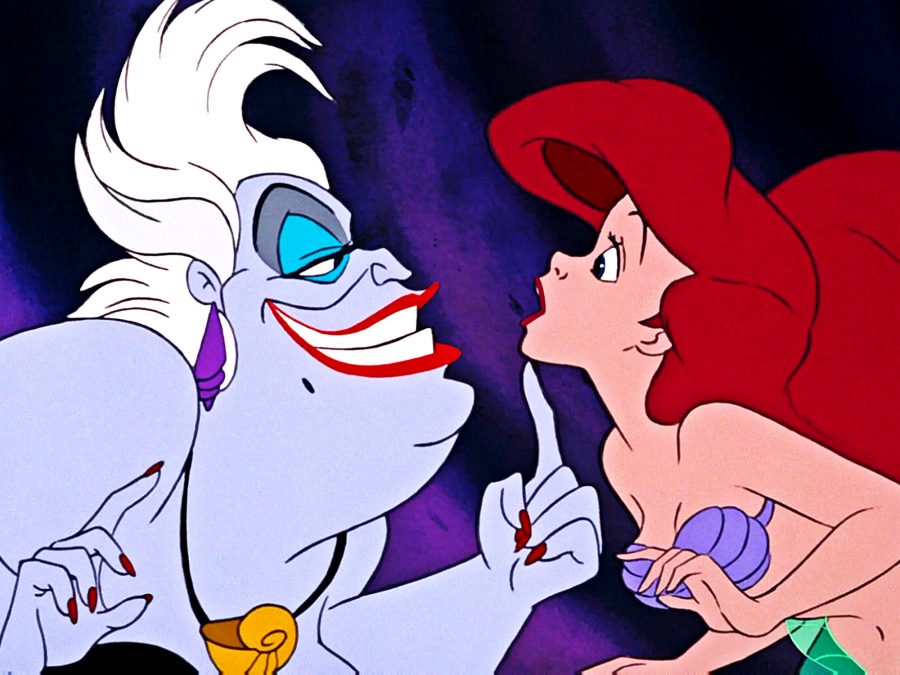 Ursula in The Little Mermaid is Disney’s ultimate queer villain and an LGBTQ+ icon. The animators based her design on the renowned drag artist and sometime John Waters muse, Divine. She furthers her own agenda by scheming against Ariel’s relationship with Eric, even manipulating her physical appearance towards the end. As Laura Sells notes in ‘Where Do Mermaids Stand? Voice and Body in The Little Mermaid’, the film is obsessed with body image and the impact it can have on how you are viewed by the rest of society. Ursula is comfortable with her large frame and is sexually suggestive, encouraging Ariel to try seducing Eric with her “body language”. However, Ursula’s size is a source of comedy, and her sex-positive outlook is viewed as perverse.

Then there’s Gaston, Belle’s brutish wannabe suitor in Beauty and the Beast, who embodies toxic masculinity while subverting the idea of the homosexual villain. He blames Belle for rejecting him, blind to his brutish personality. Unable to see why any woman would not want to be with him, he attempts to have Belle’s father sectioned in a wicked plot to emotionally blackmail her. He is the polar opposite of the Beast, the pretty boy with a twisted soul.

Gaston’s hyper-masculinity is one reason why Beauty and the Beast has been labelled a feminist fairy tale. Belle is bookish and independent. She selflessly demands to replace her father as the Beast’s prisoner, and repeatedly spurns Gaston’s advances. But she is still routinely saved by the male characters (including, at one point, a tea cup), and ultimately is only able to escape her quiet provincial life by marrying a handsome prince.

Equally telling is the fact that Gaston is succeeded by three queer-coded villains: Jafar, Scar and Hades. That Disney opted to revert back to the status quo with effeminate villains encapsulates the studio’s troubled history with external protest movements. Each “era” of Disney animation – The Golden Age (1937-1970), The Disney Renaissance (1989-1999) and the Revival (2009-present) – has its own sociopolitical context. So, after second-wave feminism’s popularity in the 1980s, the Renaissance Princesses’ had more independence and agency. But these inclusions were often flirtations designed to qualm fears that Disney wasn’t paying attention. They rarely went all the way.

Yet the Revival period seems to be actively paying attention to LGBTQ+ movements. Even though no post-Tangled film has featured an openly gay main character (Oaken in Frozen doesn’t count), Disney is gradually becoming more progressive in its characterisation. In fact, Frozen and Moana’s progressiveness is stitched right into their narratives.

Princess Elsa’s story is a potent dramatic metaphor for coming out. At first, she doesn’t understand and is told to “conceal, don’t feel”. When she unshackles herself from her secret, Elsa discovers her worth and embraces her identity. It is a strong moral lesson and a guide for any confused child in the audience. No wonder ‘Let It Go’ became a cultural anthem: it symbolises a moment where thousands of people realised it was okay to be who they are.

While it’s possible to argue that this message was diluted by the relationship between Princess Anna and Kristof, Moana is immune from such criticism because directors Jon Musker and Ron Clements removed the love interest from the story entirely. This makes Moana arguably the first truly independent princess. Her journey and idea of success is tethered to her finding herself. She doesn’t need male approval, and while Dwayne Johnson’s Maui reluctantly helps her on her quest, he remains a supporting player.

It is Moana’s journey, and her film is Disney finally delivering on the promise its narrative gives the LGBTQ+ community. It is a Disney film wholeheartedly about finding out who you are.