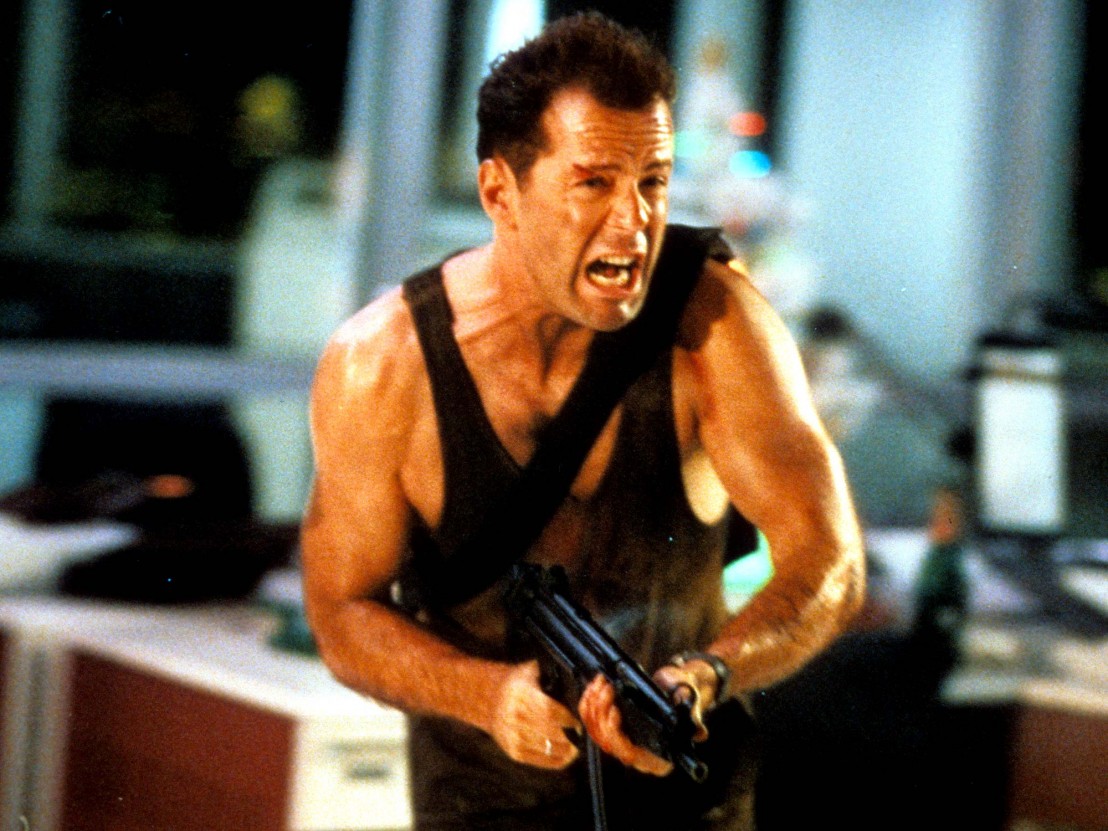 Earlier this week it was announced that the Die Hard franchise is to receive yet another addendum (because A Good Day to Die Hard was so damn good) in the shape of prequel titled Year One. As fate would have it, one of our most trusted industry insiders has just passed on a confidential document containing initial script ideas for the next five chapters in the series. This is what Hollywood has in store for poor old John McClane…

When his daughter Lucy (played by a misc brunette TV sock puppet) gets engaged to the son of a tax-dodging billionaire Mitteleuropean financier (read: arms dealer) played by Christoph Waltz, irony-heavy Irish moron John McClane – now working as an HR Compliance Officer for Chuck E Cheese – begrudgingly tootles down to Bermuda for the wedding. Sadly, the ceremony soon goes all Kill Bill / November Rain and the bride-to-be is abducted by a platoon of Nazi storm-troopers freshly sprung from the time-dilating netherworld of the Bermuda Triangle. Dutiful to a fault, Bruce manfully smears his semi-naked body with some prototype ‘anti-time gel’ and paraglides into the void with naught but a “Yippee-ki-yay” and some muffled aspersions as to his agent’s parentage. Cue mayhem.

The film opens with John McClane being handed a gold watch and then ushered out to the green pastures of retirement. He makes the calculations and realises he can afford to sell off his Brooklyn shitbox and invest in a nice little beachside condo on an island resort in Thailand. But when he arrives, disaster strikes, as the realtor fails to mention that his property was slap bang next to an “organic farm”/hippy commune populated by muslin-clad Earthmothers, and John’s twilight years are ruined by 5am muck spreading, wall-to-wall shamanic chanting and the thick fug of reefer smoke. It’s only when the leader of the commune – a strangely svelte Eurotrash wiseacre calling himself Pierre (played by Christoph Waltz) – that McClane decides to join, but only with the intention of tearing down this hemp-swaddled edifice from the inside.

After accidentally levelling an orphanage for excessively cute children when trying to cuff an itinerant and boorish carjacker, McClane is busted down to rookie status and is posted as on-site security for a low-budget exploitation horror movie filming in Queens. The production’s strangely extrovert Eurotrash director (played by Christoph Waltz) tries to coerce McClane into becoming a background artist, but he resists. Their game of psychological cat-and-mouse continues, though McClane soon realises that as the days roll on, the crew appears to be thinning out. Only then does it transpire that Waltz is actually orchestrating a bizarre, City-wide gonzo snuff movie. And so McClane kills everyone involved.

It had to happen. With John McClane involved in so many episodes of high-profile festive carnage, it was only a matter of time before Hollywood came a-wooing. After losing the rights to his life story in a backroom poker game to a man known only as ‘Paddy the Greek’, John finds himself at the whim of Tinsletown, who package the events of the original Die Hard as a postmodern deconstruction of the action movie, directed by Spike Jonze and starring Christoph Waltz. Posters and TV ads bearing a fictional doppelgänger begin to plague McClane, sending him to the brink of sanity. The closing shot witnesses him fully deranged, relieving himself over an image of Waltz plastered over the side of a bus, whilst repeatedly singing the theme tune from Frasier ad nauseum.

We return to LA’s Nakatomi Plaza on the day after that fateful night. The minions are in the morgue, McClane’s patching up his wounds and mainlining nog with his missus and Hans Gruber’s blood-black entrails paint the pavement below like some abstract expressionist nightmare. But what of the day labourers, the Mexican border jumpers or Russian serfs who are employed by (the late) Mr Takagi to ensure the smooth running of the building? This sombre new Die Hard offshoot documents the toil of those below stairs and the harsh realities of cleaning up after a workplace massacre. So painful and arduous is the workers’ task of mopping up the oceans of blood that, in an ironic twist, they too (led by Christoph Waltz) decide to tool up and shoot up their own nondescript sky scraper.