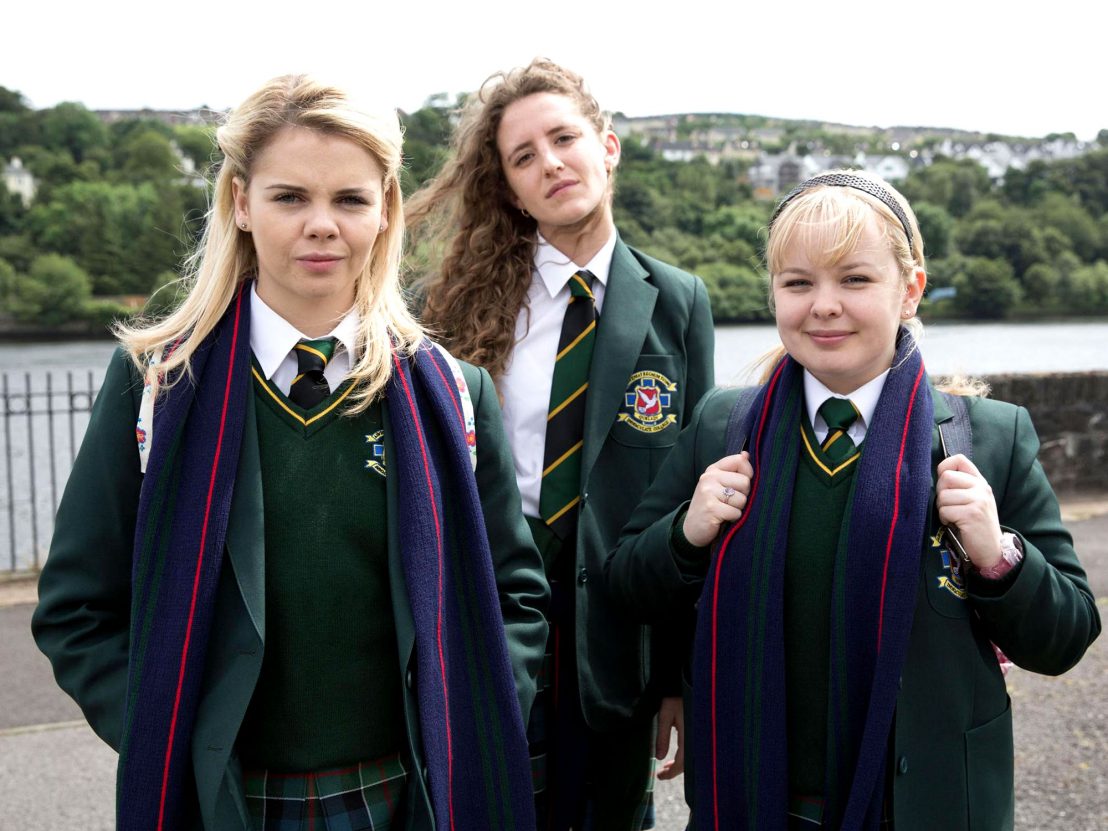 As a teenager in Northern Ireland, if you weren’t sussing someone’s ‘side’ out by their surname, or whether they called their worship ‘mass’ or ‘church’, it was imposing a restrictive (but usually pretty spot on) archetype by their borough. I’m an Ards girl, my best friend’s a North Down one, and I spent my university years with the infamous young women of Derry. As if we needed any other way of dividing ourselves up. Derry girls, you see, are a special bunch – with an accent that will box you around the ears across even the busiest bar. They’ve been immortalised by the Pogues, and represented (however questionably) on a global stage by Girls Aloud’s Nadine Coyle.

Channel 4’s Derry Girls, created by Lisa McGee, is currently offering a deeper, more vibrant depiction of young Northern Irish women. It’s a riotous, nostalgic snapshot of a group of teenage girls living in the country’s second city during the 1990s, a time defined by conflict and political strife. They’re agonising over double denim and eyeliner, dealing with evil school nuns and getting pissed off at army checkpoints.

Up until now, young women have been largely left out of the wider cultural narrative surrounding Northern Ireland. Film and television has tended to focus on the prominent male politicians, soldiers and hunger strikers whose actions came to define The Troubles. Think Shoot to Kill, Hunger, or ’71. McGee allows a bolshy, hilariously awkward ragtag female gang, led by 16-year-old Erin Quinn (IRL Derry Girl Saoirse-Monica Jackson), to reboot the stories told around an important time, socially and politically, in Northern Irish history.

It might to be difficult to imagine any humour in a time where kneecapping was the norm and political progress balanced on a knife edge. Boisterous, hoop-earringed Michelle Mallon (Jamie-Lee O’Donnell) brings her male English cousin along to start at the all-girls school with little fanfare. No big deal. She announces, with a smidge more emotion, that he’s the offspring of an aunt who travelled to the UK to get an abortion – turns out, that termination never took place. Erin’s mother asks if Macaulay Culkin is one of those Protestants, and a girl evades expulsion, probably because she’s in the IRA, they all agree. It’s a raucous, daring kind of humour, and an important statement – despite the harsh reality of the time, young women were able to laugh, have crushes and decide that army men were “rides” (read: attractive). That’s a vital message to share.

And Derry Girls is pure ‘Norn Iron’ – Catholic school uniforms, Orangemen marches and Union Jack-painted pavements galore. As the premiere episode begins, we see men crossing out ‘London’ in the ‘Welcome to Londonderry’ sign. The beauty – and laughs – of this show stem from the honest details: a picture of national treasure Daniel O’Donnell sits on school principal Sister Michael’s desk; Sinead O’Connor peers out from a heavily-postered bedroom wall; and locals ponder over what the hell the politically-charged murals plastered around town actually are – are they golf clubs, spatulas, or rifles? Take a guess.

Much of what we see on TV about Northern Ireland tends to be dry, grim or teeth-grindingly misinformed. It’s sparse news reports with names pronounced clunkily, documentaries on horrors we’ve been forced to tread again and again, or sour, just-missing primetime dramas. Back in 2012, the BBC ran 6Degrees a pretty popular series based around freshers students in Belfast (one DG lead O’Donnell also starred in), and there was Cherry Bomb and Good Vibrations.

NI-based creatives have taken to guerilla comedy, with Facebook pages (Shane Todd’s ‘Mike McGoldrick’ persona or ‘Belfast Girls’) and Twitter accounts. But what we’ve been distinctly missing is real Irish joy on national screens. Derry Girls benefits from having a predominantly Irish cast, with three of the five leads hailing from the region. The power of allowing people to tell their own cultural stories can not be underestimated, and it most definitely comes across in the series’ DNA.

Fearlessly, it never concedes to over-explaining its whip-sharp comedy for a wider UK audience, or delving into the darker complications of the conflict. What’s been fascinating about Derry Girls’ stratospheric popularity is its pull even outside Ulster (a second series has already been commissioned). This comes from its obstinate, unapologetic sense of identity and unrivalled comic timing.

Mostly though, it’s more about the politics of ordering from the busiest chippy in the city on a Friday night, instead of the politicians that squall on the TV in the background. McGee lets her character’s be outrageous, they love techno and The Cranberries and have bizarre school drama, they wear scrunchies and pastel eyeshadow. Watching the first episode with my mother and sister, it quickly dawned on me that, despite the generation gap, these were lives that we ourselves have lived and witnessed. Sometimes, even just hearing your own slang – and there’s a lot of it – on primetime national TV is enough. But seeing nuanced and disruptive stories of young women dealing with the peaks and troughs of adolescence – ones who happen to be caught in the figurative crossfire – transcends time and place.