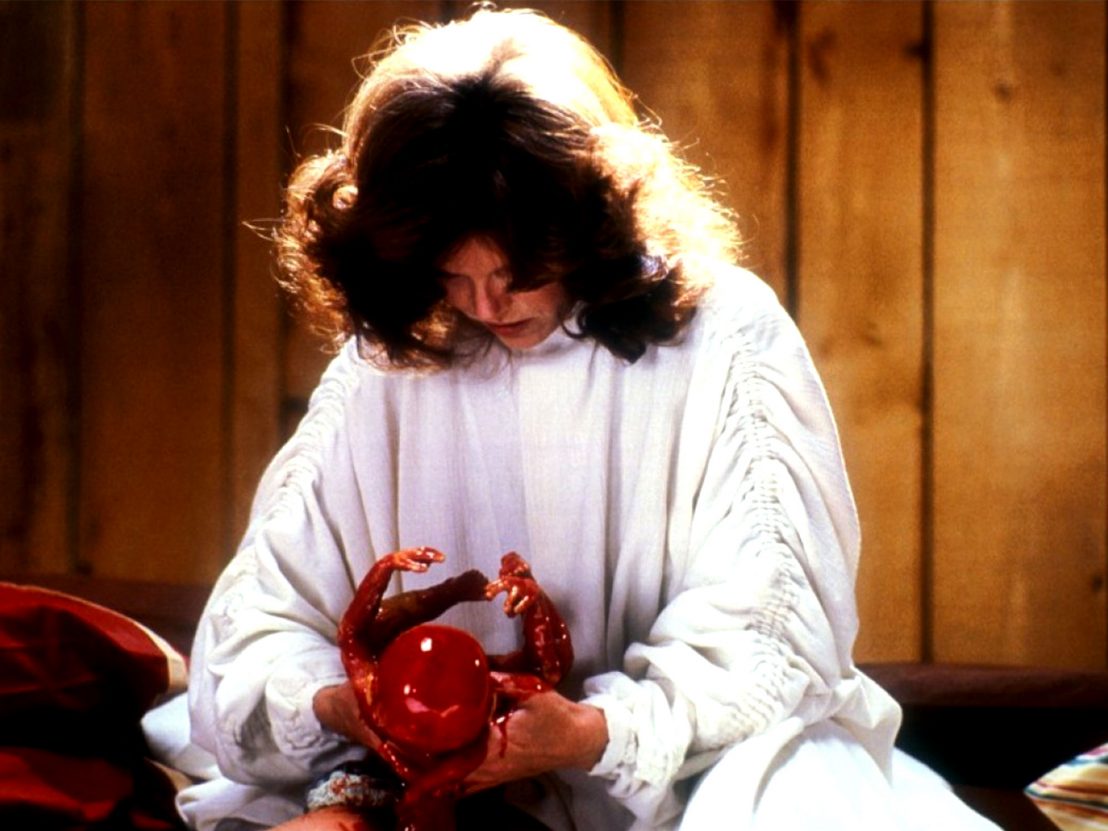 When we think of our mothers, we may think of love and care, and yet cinema is obsessed with the exact opposite. The horror genre has always been fascinated with the terrifying dysfunctional, and from Norma Bates to Margaret White, cinema always comes back to its mothers. But it is society and its fear of the feminine that creates this monstrous figure we’ve come to know.

For centuries, in both literature and visual media, horror has drawn connotations between femininity and the devil; during renaissance times the uterus was often drawn with horns. In David Cronenberg’s 1979 body horror The Brood, the womb is exactly what the audience fears. In the film, Nola Carveth (Samantha Eggar) is isolated in cult-like experimental therapy called ‘psychoplasmics’ at the remote Somafree Institute.

With the help of acclaimed Doctor Hal Raglan (Oliver Reed), she is taught to deal with her anger and childhood demons. Raglan’s methods of psychotherapy result in the patient’s subconscious anxieties manifesting on their physical bodies. For some patients, it shows in sores and boils, for Nola it’s an external womb which forms on the side of her stomach, and unsettling creatures are born from her rage.

As part of her therapy, Raglan forbids Nola’s husband Frank (Art Hindle) from visiting, but insists on weekend visits from their five-year-old daughter Candy. After Candy comes home one weekend covered in bruises, Frank suspects she is no longer safe with her mother and begins to investigate the institute in a bid to discredit them and gain sole custody. It’s when Frank seeks to take Candy from Nola that the murders begin.

Cronenberg’s creatures are hard to forget, and the childlike ‘brood’ creatures are no exception. In the film, Nola’s anger has been birthing itself from her exo-womb and acting on her unconscious desires. There is now a whole class of dwarf clones clad in brightly coloured ski suits wreaking havoc and killing anything that causes her stress. When one suddenly dies, during autopsy a doctor remarks that the creature seems ‘unformed.’ It has no teeth, genitals, or most surprising to them, a navel. This ‘thing’ was never really born at all.

The interesting grey area here is that it was, but it was of woman alone. The idea that a woman can pertain generative powers without a man is what becomes the source of terror. Femininity and motherhood in horror are framed as something to be feared, a disease passed down through generations, what seminal gender theorist Barbara Creed called “the disease of being female”. In The Brood, ‘female’ is an abject creature controlled completely by its emotions and reproductive functions.

Men perceive women to be the bearers of children, the source of ‘the miracle of life’, but they are simultaneously repulsed by the very nature of the feminine: the blood, the birth and all that comes with maternal function. Nola challenges this in the film’s shocking final act. When confronted by Frank, who has come to retrieve Candy from the brood, she asks if he is ready to love her. Frank needs to keep Nola calm, if she becomes angry or upset the brood will kill Candy, so he tells her yes.

She is cautious of his answer and decides to test his love; in a memorable and gruesome scene Nola lifts up her white gown to reveal a terrifying exo-womb on her stomach. Leaning forward to bite into it, she unveils a small mutant foetus and licks it clean of its birthing gore like a wild animal. She sees Frank recoil in revulsion and her fears are confirmed – “You lie,” she exclaims, “I disgust you!”

The generative power of woman has been the source of horror in stories for centuries, and film is yet another channel to express that. The films of Cronenberg, particularly The Brood, are of a genre that examines these fears – ones that are subconscious and unknown until we’re shown them – in gloriously unsubtle metaphors that are hard to forget, even 40 years later.