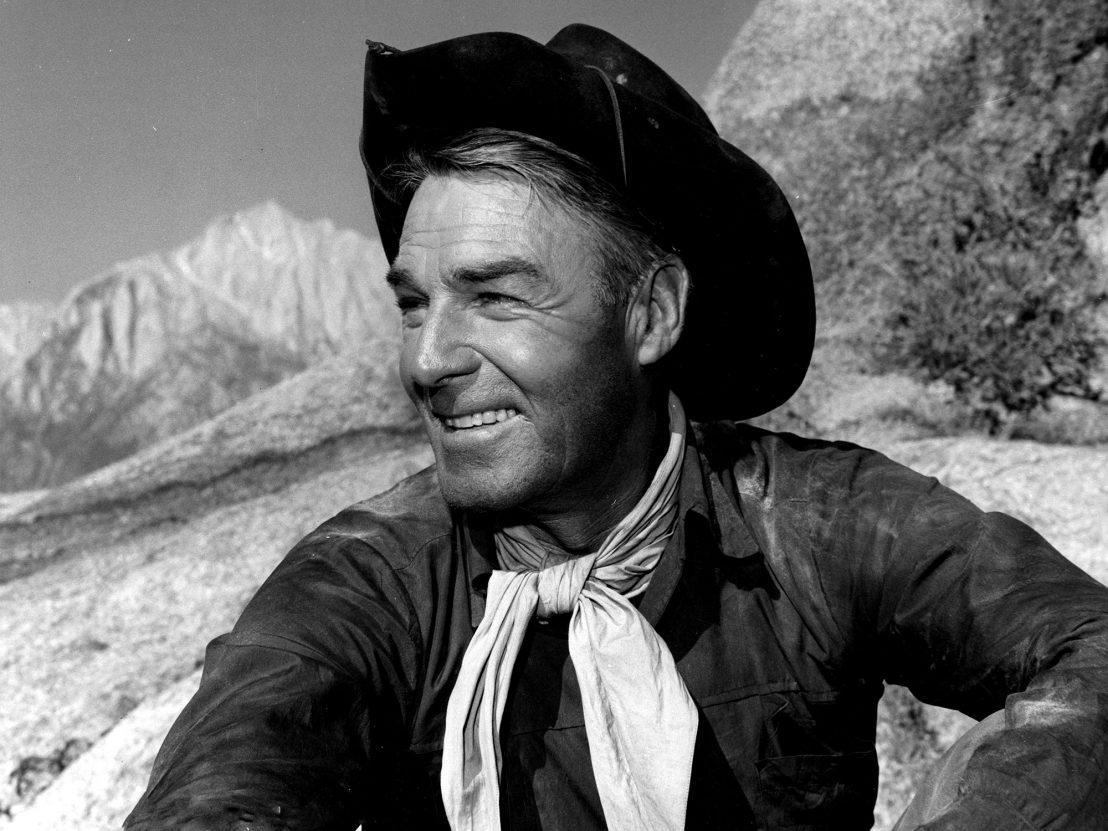 Budd Boetticher worked in multiple genres – the gangster picture, the film noir thriller, the war movie – but his reputation rides high in the saddle on the back of his westerns. This is appropriate, for Boetticher’s pared-down picturemaking style is close to the just-the-necessities ethos of the western. Working sometimes with 13-day shoots, he turned out unhurried films reflecting a serene confidence in what went where and why. His best westerns are films that travel light, conserve their energy and their resources, don’t waste a word or gesture or a set-up. They aren’t great because of evident ambition or mythic dimension, but because of their ability to distill, condense, encapsulate.

Boetticher’s filmmaking cut to the bare essentials, and perhaps this is how he viewed his own life, though from the outside one sees merrily squandered opportunities. When he died in 2001 at age 85, he had been only sporadically employed as a director of fiction features in the years after 1960, when he interrupted his career to head to Mexico to pursue a passion project that swallowed up much of the decade ahead, a documentary on his old friend the bull fighter Carlos Arruza.

His career never fully recovered from this abrupt abnegation, but what he’d done up to that point was enough to install him as the subject of a particularly enthusiastic mini-cult, some of who would pilgrimage through the years to pay homage to that rare bird Boetticher, one of the last surviving specimens of the old-school tough guy director and brawling Hemingway-esque existentialist.

Among those passing through was Taylor Hackford, making a PBS profile on Boetticher. Introducing a recent screening of The Tall T in New York, Hackford recalled shooting at the old man’s ranch in Chatsworth, giving a graphic description of Boetticher, after staying on horseback at length to facilitate reshoots, dismounting and dropping trow to display his bleeding hemorrhoids and exploded anus, a souvenir of a rectal goring received in the bull fighting ring.

The man and his ass and his reckless rootin’ tootin’ life were plenty colourful enough to be remembered, but his work quietly speaks for itself. At the centre of Boetticher’s legend are his films of the mid-to-late 1950s, a collection of which can be found on ‘Five Tall Tales: Budd Boetticher & Randolph Scott at Columbia, 1957-1960’, a new Blu-ray box set from Powerhouse Films. The films here belong to the so-called “Ranown Cycle”, a series of six or possibly seven westerns starring Randolph Scott, mostly produced by Scott and Harry Joe Brown – from whence “Ranown” – and mostly written by Burt Kennedy, a pure poet of ranch lingo and western speechifyin’. (The liminal entry in this grouping is 1959’s Westbound, directed for Warners to fulfil a contractual obligation, which features Scott but no other key personnel.)

Oscar “Budd” Boetticher had ridden a long way to make these terse, dry, sometimes gorgeous plein air movies. He was raised in an atmosphere of serene moneyed comfort, but distinguished himself with a knack for squeezing into tough and dirty spots, taking a precipitous tumble from Midwestern gentility to being a fortysomething gringo malingering in a south-of-the-border jail cell. After losing both of his parents early in life he was brought up in Evansville, Indiana by the head of a prosperous hardware concern. He loved football, was a standout at Ohio State University, but quit school demoralised after a knee injury decimated his professional prospects.

Now adrift, on the first leg of a South American tour in Mexico City in 1939, Oscar fell in love with a new sport, bull fighting, and stayed on to study the art under such celebrated toreros as Don Lorenzo Garcia and Fermin Espinoza. This skillset would eventually provide him his Hollywood break, teaching star Tyrone Power the ropes as “bull fighting advisor” on Rouben Mamoulian’s Blood and Sand. 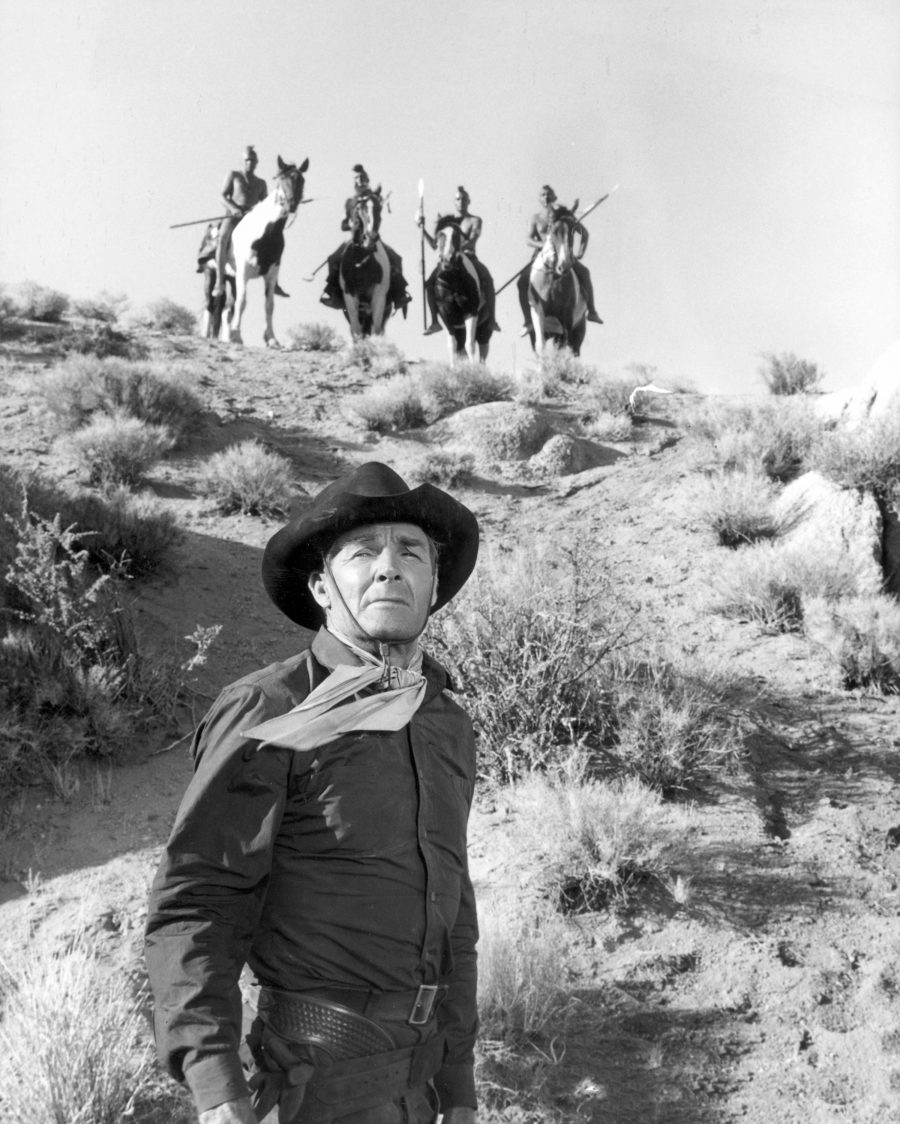 Consulting on the cutting of an action scene in that film with editor Barbara McLean, Boetticher discovered his life’s third great passion in film work, and so he stuck around the movie town, and began to climb the ranks from the bottom rungs. He made his break into directing at the Columbia “B” unit run by Sam and Irving Briskin, and kept on the grind making cheapos at Poverty Row outfits including Eagle-Lion and Monogram Pictures. Some of the pictures he made in this period aren’t without their pleasures – noir entries Assigned to Danger and Behind Locked Doors are standouts – but Boetticher felt himself floundering in the minor leagues, and sought to pull himself out by writing a screenplay of his own.

The resulting film, Bullfighter and the Lady, made under the auspices of John Wayne’s Batjac Productions, was what kicked Boetticher upstairs. Drawing not a little on Boetticher’s personal history, the film stars Robert Stack as an American in Mexico who takes up bull fighting in order to win the heart of a local señorita. It was the film on which Oscar Boetticher started to call himself Budd, and the only one for which Budd was Oscar nominated – he lost Best Story to Seven Days to Noon.

Its success led to a contract at Universal, and to the beginning of Budd’s career as a director of principally westerns. But he was restless, at odds with Universal’s house style from the get-go, and probably temperamentally unsuited to the life of an assembly-line contract director. As an independent he had rather more luck, as in the case of The Killer is Loose, a baroque thriller strikingly shot by longtime Boetticher buddy Lucien Ballard, whose vengeance-driven plot anticipates the westerns to come.

It was with horse opera Seven Men from Now, again for Batjac,
that Boetticher began his greatest period of productivity – and the Ranown Cycle. The film lays out the basic elements that will be arranged and rearranged throughout the Cycle movies. There’s a taciturn protagonist, always played by an increasingly weatherbeaten Scott, who is bound to a hard and fast personal code. He lives by his terms, but is far from uncompromised by the violent world in which he lives: Scott plays soldiers-of-fortune and bounty hunters, and in Decision at Sundown, his character is close to pathological, fixated on terminating smoothie John Carroll, the last – but far from only – man that his wife cuckolded him with before her suicide.

Counterpoised to the Scott character you have a loquacious antagonist frequently in conversational close quarters with the protagonist, played in Seven Men by a Cheshire grinning, lime green scarf-clad Lee Marvin, though Richard Boone, Pernell Roberts, Claude Akins, and Craig Stevens variously step into the part. There may be other proper villains at play, but this antagonist is no more fully bad than the Scott character fully good, and every bit as human in his charisma and clearly communicated motives.

In the middle of this masculine brinksmanship there is a woman, and behind her, usually, the unquiet memory of another woman. Scott’s characters boast a plethora of dead wives and rankling, vengeful grudges against the men he blames for their deaths, the memory of matrimony stirred by the women he encounters along the trail: Gail Russell, Karen Steele, Virginia Mayo, Nancy Gates. 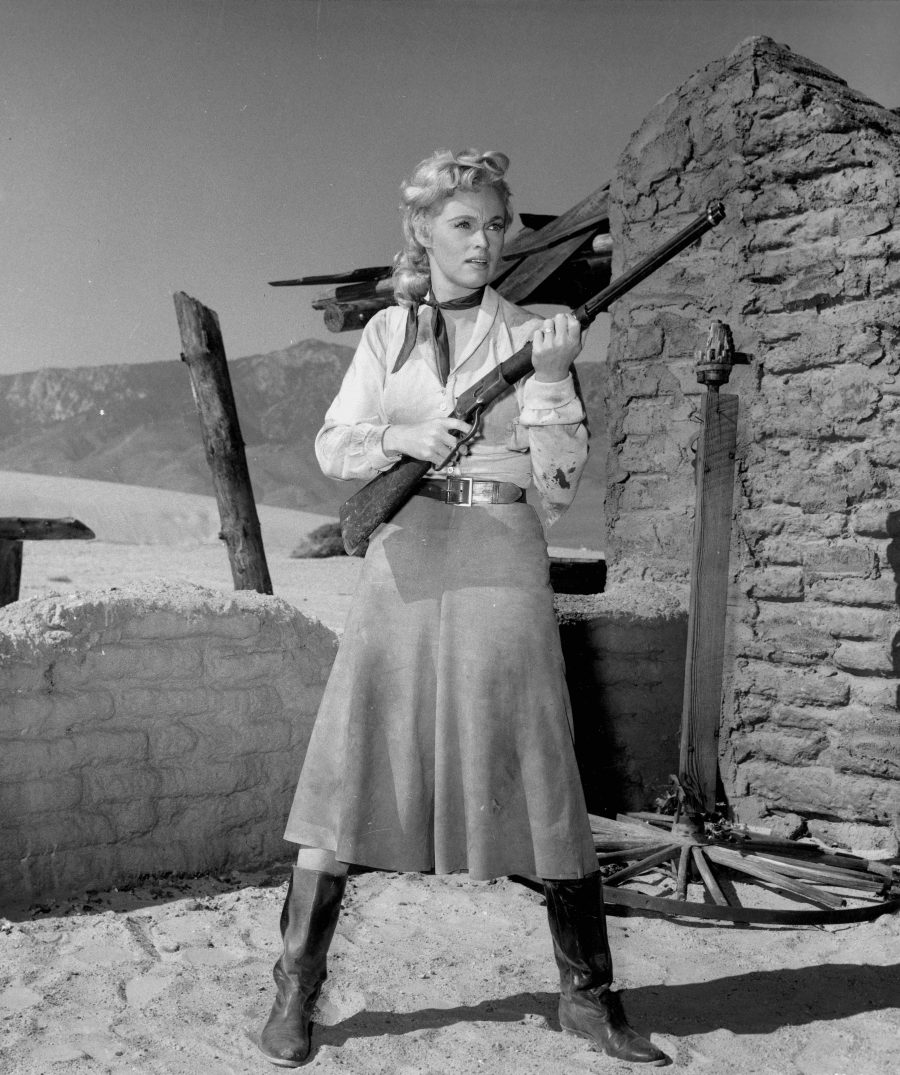 Scott, born into the straight-backed comportment of a Virginia gentlemen, places himself in the role of the protector of threatened femininity, while his antagonists, more forthright in matters of sex, often razz our hero for his chivalric posturing and hypocrisy – Roberts in Ride Lonesome isn’t above trying to deal himself in. In Seven Men from Now this results in one of the steamiest no-contact scenes in cinema, as Scott beds down beneath the covered wagon in which Russell is sleeping, the two talking to one another quietly, close but very far away. (The Tall T is unique in sending Scott away with a living woman, Maureen O’Sullivan.)

What are these Ranown movies about? Well, they’re about 70-something minutes. Skirting their deep pools of ambivalence they open towards their characters, we can say they are, broadly, against needless cruelty and violence and against small-town potentates, like those who rule Agry Town in Buchanan Rides Alone, and against the racial bias levelled against Manuel Rojas’ character in that same film.

But more than addressing any moral or social question, they’re about capturing the tenor of conversations that take place while sipping a cup of coffee outside at night or a ripple of exchanged glances that tell the real story behind official bluster, about filming seemingly simple and straightforward scenes in such a way as to capture the complex, multivalent operations at work within any group of people pursuing their own individual motives. And they are about the pleasure of their own making, of doing and undoing and doing again.

Perhaps the nest piece of criticism pertaining to these films is My Budd, a tribute painting by Manny Farber that shows a tabletop view of scattered ephemera pertaining to Ranown pictures – doll-like westerners, a toy train track, a scattering of rocks, a slab of sky blue – elements fixed on the canvas, though seemingly inviting play, rearrangement.

This tribute may have sprung from some imagined affinity on Farber’s part, for he had left behind criticism to teach and paint, just as Boetticher had gradually left cinema alone, contenting himself to raise his Andalusian horses. The last Ranown movie, Comanche Station, was released in 1960, also the year of Boetticher’s The Rise and Fall of Legs Diamond, which gives centre stage to the antagonist figure in the form of Ray Danton’s cold, preening gangster-gigolo.

Then Boetticher was shortly off to pursue the White Whale of his Arruza movie, to return to a Hollywood where he was largely forgotten outside of a cache of admiring cineastes. He made Audie Murphy’s last feature, A Time for Dying, but even as work dried up, his influence didn’t. His contemporary, Don Siegel, directed Boetticher’s screenplay Two Mules for Sister Sara when nobody else in town was taking Budd’s calls, and before Sam Peckinpah lit off on his own trail he produced the Scott-starring, Ballard-shot Ride the High Country, a work heavily indebted to the Ranown films.

You can bemoan the films that were lost because Boetticher decided to split for Mexico, though it might just as well be said that he wouldn’t have been able to make the films that he did if he wasn’t the sort of man to up and leave it all behind. It was this dedication to the physical life, the preoccupation that pulled him after Arruza, that allowed Boetticher to put flesh-and-blood onto western archetypes to a rare degree. This doesn’t just apply to their vivid violence and the solid thunk of bodies in saddles, but to the point at which they allow an entire cast of characters their individual agency. To borrow from Renoir, everyone in the Ranown movies has their reasons – and most of them have a gun to back them up.