Why I love Brendan Fraser’s performance in Looney Tunes: Back in Action

His meta, slapstick turn in this widely-derided cartoon spin-off proves that Fraser isn't afraid to laugh at himself, or Hollywood. 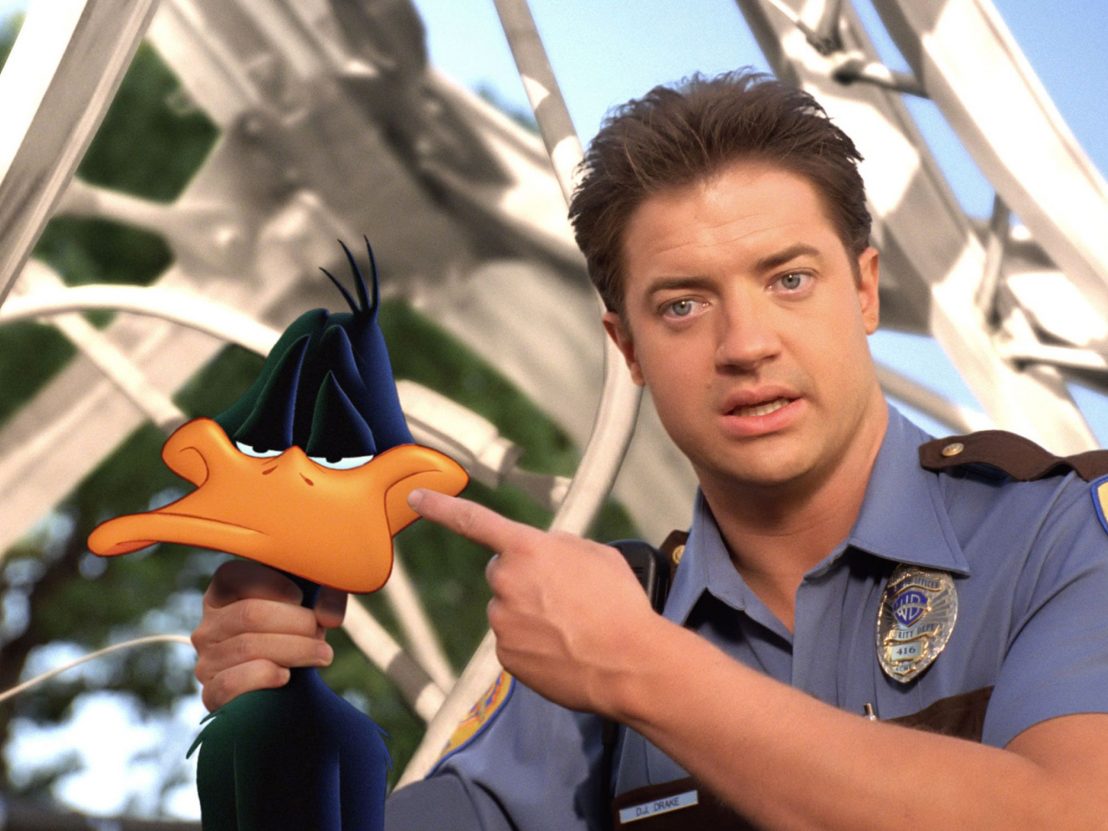 The Brendan Fraser renaissance is officially on. Fans of the FX series Trust and DC’s Doom Patrol will know he’s actually been back for some time – and yet, watching him in tears as he receives a standing ovation at the London Film Festival feels like a cathartic moment. Cathartic both for Fraser, for whom The Whale marks an incredible comeback from years of personal hardship, and for audiences who have sorely missed watching a man who was once one of Hollywood’s most bankable stars.

Following Fraser’s big-screen return, many have reminisced about how his ‘90s and early ‘00s action roles made him such a stalwart box office identity – be it his swinging performance in George of the Jungle or his iconic role as Rick O’Connell in The Mummy franchise. For various reasons (including his health and the alarming allegation that former Hollywood Foreign Press Association president Philip Berk sexually assaulted Fraser in 2003), his career stagnated. As audiences bask in Fraser’s return to the fold, largely missing from their celebrations is any recognition of the film containing perhaps the best display of Fraser’s ability, humility, and dedication to his craft – the criminally underrated Looney Tunes: Back in Action.

The film was a miserable flop upon release, making back only $68 million of its $80 million production budget despite its fine pedigree in Gremlins director Joe Dante. Back in Action has also not enjoyed the same cult reverence as its toontastic predecessor Space Jam. It’s definitely fair to say that Back in Action isn’t much more visually impressive than Who Framed Roger Rabbit, which came out 15 years earlier, and Steve Martin’s performance is toe-curlingly excessive as he tries to outperform the animated characters at every turn. But Back in Action is loaded with Looney Tunes’ greatest weapon: satire.Fraser, who is so wholeheartedly committed to the part, brings joviality and bite by parodying both himself and the Hollywood machine for which he became such a poster boy.

Playing a Warner Bros. Studios’ security guard desperate to make it as a stuntman, Fraser’s performance as Damian ‘D.J.’ Drake is as self-deprecating as it is charmingly funny. It is a role that lets him mock what he had come to represent in Hollywood at the time: the handsome, classically masculine action hero who wins crowds over with a smile and does all his own stunts. “A muscle-bound beefcake,” as Martin’s evil ACME Chairman puts it.

Conversing with Daffy Duck on a trip to Las Vegas, D.J. gets defensive about his stuntman record and protests “Did you see those Mummy movies? I’m in there more than Brendan Fraser is!” Temporarily placing himself in a moviegoer’s shoes, he then mockingly continues “No no no, the Brenmaster does all his own stunts!” Fraser is hyper-aware of his own stardom and is unafraid to use it for comedy, gleefully skewering his muscular golden boy image. 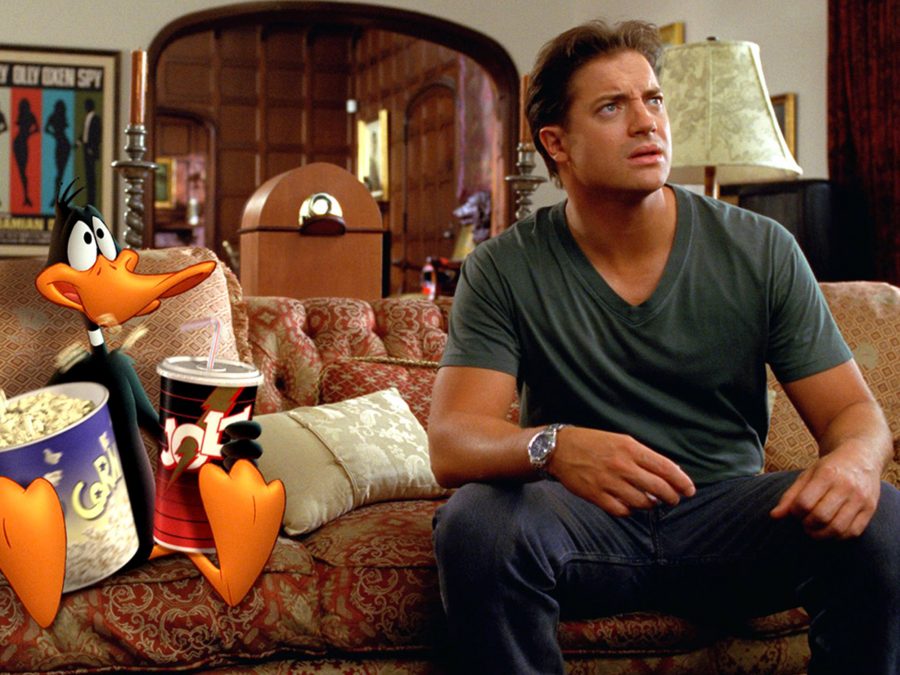 D.J. slowly grows into the kind of all-out star that Fraser is known for being, albeit not without a healthy amount of ridicule. The final showdown is against a robot dog, and key questions are answered away simply by virtue of his name. How does he know martial arts? How can he skydive off the Eiffel Tower? How can he perfectly deflect poison darts with a machete while absolutely rocking a tight blue vest? The answer to all of the above is very simple: he’s Brendan Fraser, and he knows it. Hence the glint in his eye whenever he turns his stoic action-hero reputation on its head in the name of goofball comedy.

Fraser’s pitch-perfect casting and dedication to the part help to bring out the best in the movie as a whole too. Back in Action stands proud compared to the recent uncanny, unimaginative squib of Space Jam: A New Legacy. The cast’s interactions with the cartoon characters, from their eye levels to their movements, ensure that they fit seamlessly into their world (Fraser versus some goons in a Vegas casino stands out for its goofy, polished execution).

Such a takedown of studio cliche rarely ages poorly. Sensational silliness can arise when, like Back in Action, a Hollywood experience makes its very foundations the subject of ridicule. You only need to look as far back as the finale of Marvel’s She-Hulk to see that at work. And Fraser’s performance, as it is with The Mummy or Journey to the Centre of the Earth, is at the heart of the film’s success.

His finest moment, however, comes right at the film’s climax. In a bizarre scene, D.J. confronts the ‘real’ Brendan Fraser: a luxury brand-wearing, hyperbolic, self-obsessed caricature of himself. “Remember me? I threatened your manliness and you got me fired?” D.J. asks him. Of course, ‘Fraser,’ does not remember him, since he gets a lot of people fired. D.J. then punches him in the face and walks off triumphantly. It’s the high point of Fraser’s performance and evidence of how up for the assignment he has been since the beginning of the film. He quite literally takes down the larger-than-life image of himself that has dominated for so long, and when all is said and done it is the kind and hard-working man that remains. It is a win for the humble, low-key hero that rewards courtesy and gentleness, throwing a punch at Fraser’s butch onscreen facade.

His foray into Looney Tunes may not be what Fraser is remembered for, but you would be hard-pressed to find better examples of his self-awareness and acting talents (not to mention his leading man status, a goal that many strive for but few can achieve with such ease). Such entertaining displays of Fraser’s ability and personality deserve to be remembered as he caps off a universally popular return to the big screen. Few films feel like a more appropriate celebration of everything Fraser was and continues to be in the minds of audiences across the world – especially now he’s officially back in action. 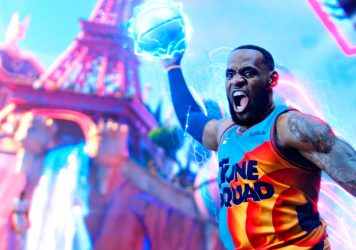 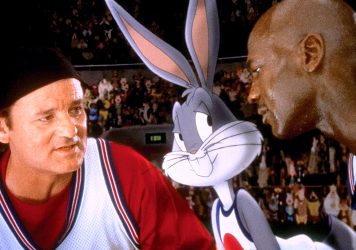 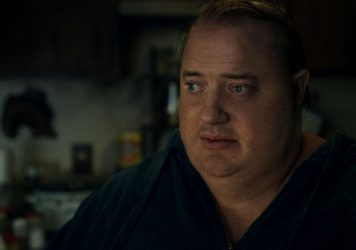 Brendan Fraser gives his all as a morbidly obese man trying to reconnect with his estranged daughter before his death.