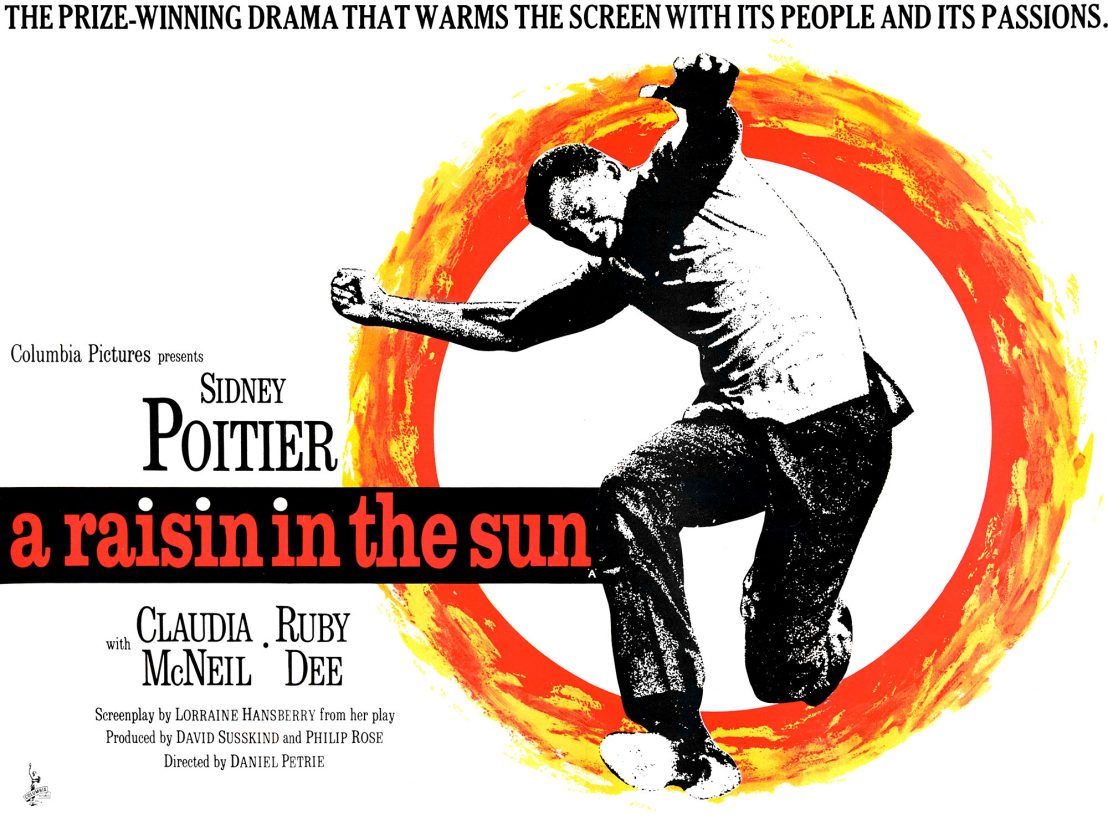 As part of the BFI’s major UK-wide Black Star season the BFI Southbank is currently home to the Separate Cinema Exhibition, showcasing original film posters loaned from the most extensive private holdings of African-American film memorabilia in the world, The Separate Cinema Archive. Spanning a century of film art and taken from various countries around the world, these posters show the evolution of movie promotion over the years, but more pertinently they also reveal a great deal about how blackness has been portrayed, exploited and indeed commoditised, throughout the history of cinema. Here are 10 of our favourites to give you a flavour of this essential exhibition.

Hallelujah marked a turning point for African-Americans in film. It was the second all-black cast film produced by a major Hollywood studio and the first sound film by white writer and director King Vidor. It focused discussion about the impact of film images on the religious life of black Americans and on their political and social opportunities. Hallelujah demonstrated the talents of black performers and showed the artistic possibilities of stories focused on black life. Yet, Hollywood was still decades away from casting studio films with African-American lead actors. 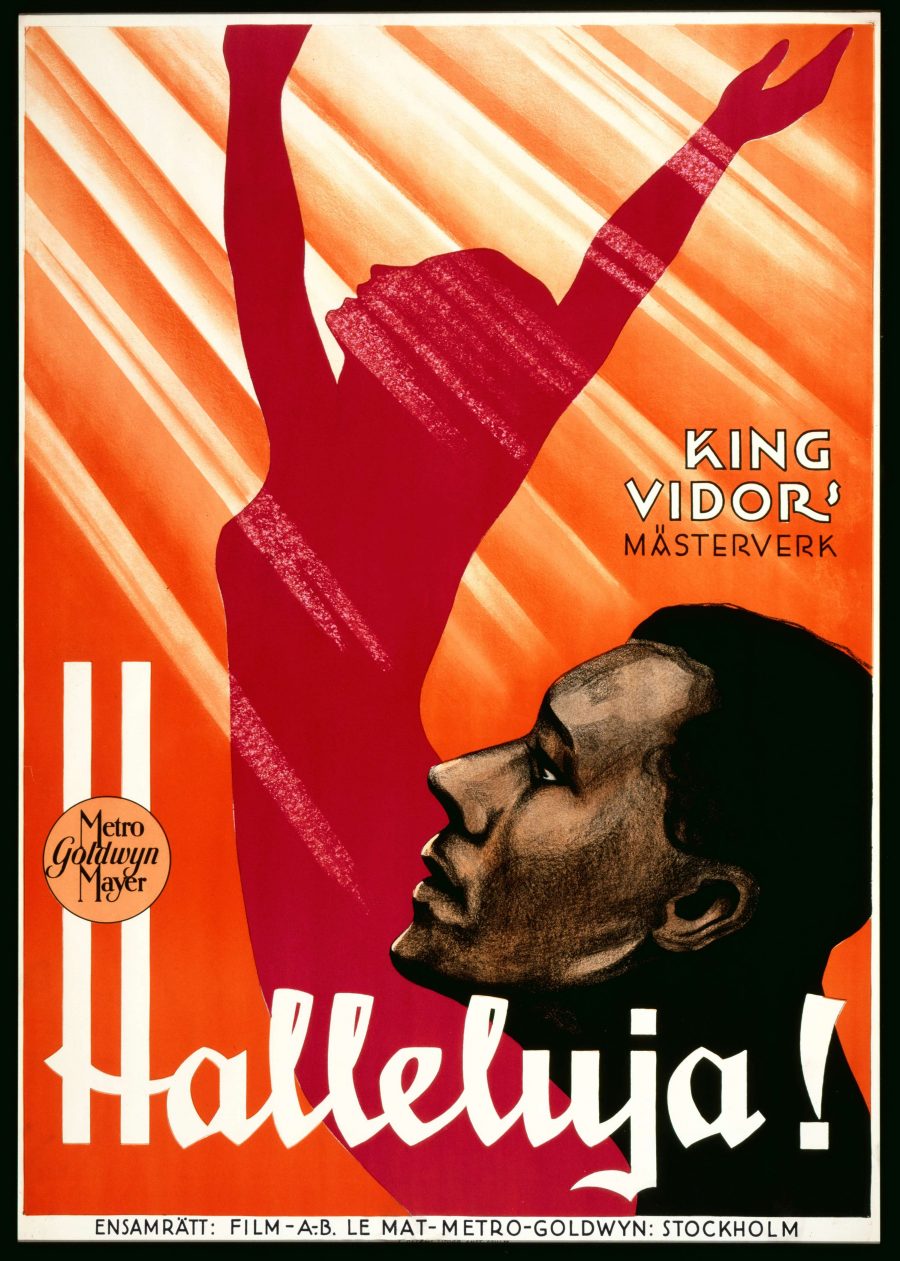 In a career spanning almost 30 years, Oscar Micheaux became the most successful early black independent film producer and the first black film auteur. A milestone in American film history, The Exile was the first all-black-cast independently produced “talkie”.  It enjoyed a successful run in New York, but was censored by the Pennsylvania Board of Censors, which objected to a scene of Baptiste kissing a white woman.  Although the film generated much controversy, it gave hope to other race filmmakers that black films could compete in the new market of sound movies. 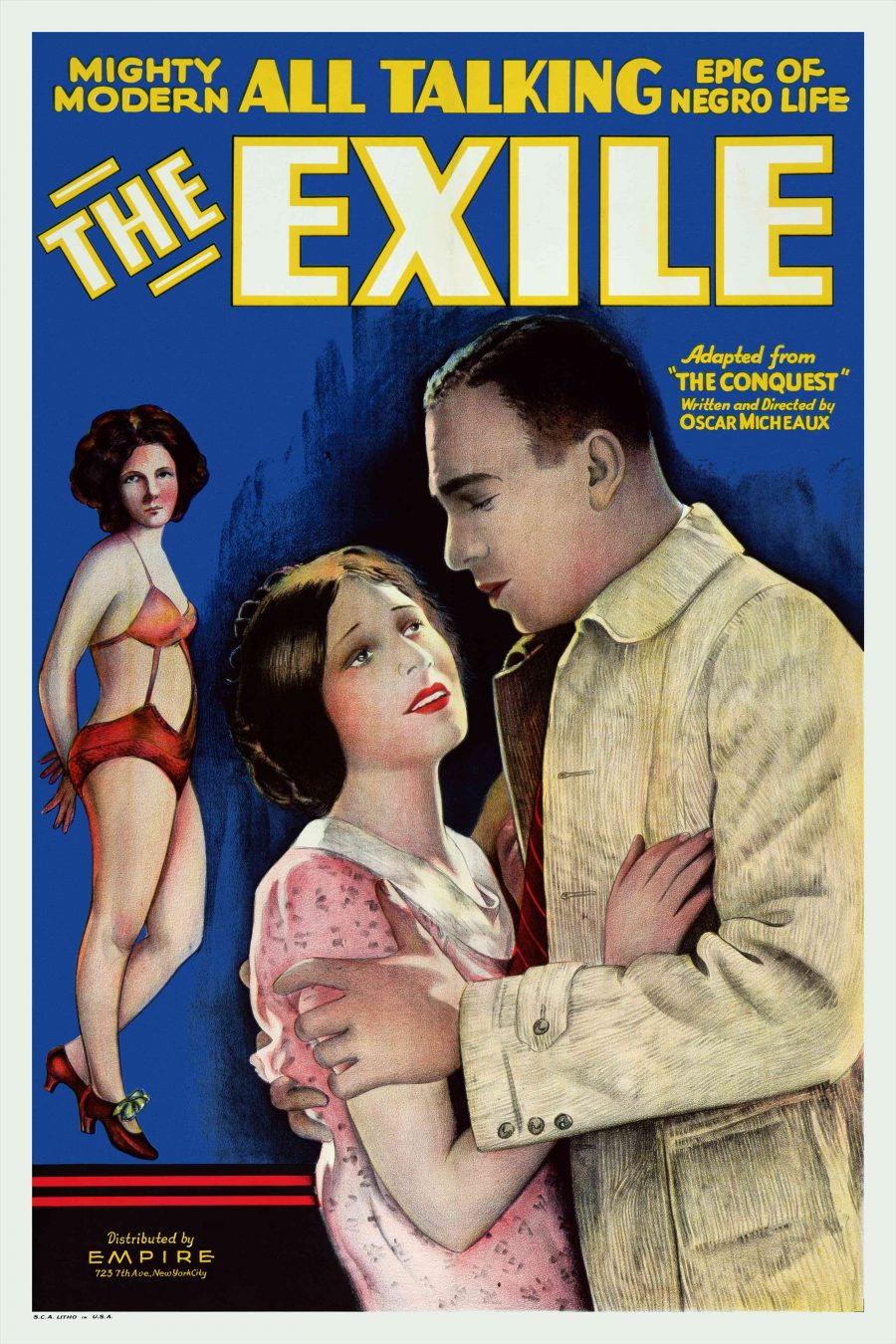 Oscar Micheaux offered audiences a black perspective on the Chicago gangster film genre (Little Caesar, Scarface) as emphasised in this poster. Other marketing materials prioritised the music, with images of a band playing. Ethel Moses, billed as “the Black Jean Harlow,” was a veteran Broadway star (Blackbirds, Showboat and Keep Shuffling) and Micheaux’s leading lady in both Temptation and Underworld. Oscar Polk, her co-star, later featured as Scarlet O’Hara’s loyal servant Pork in Gone with the Wind. 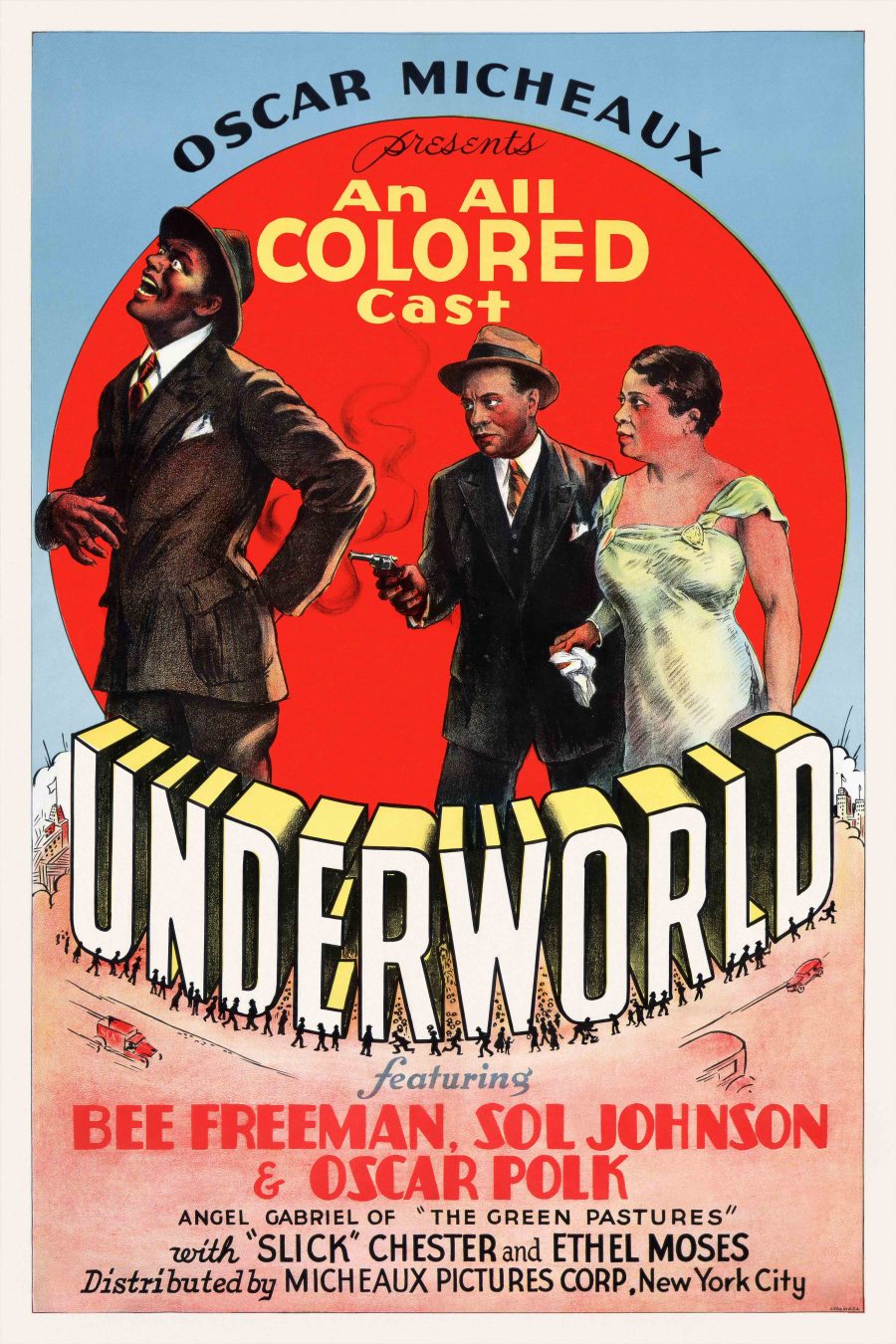 On 21 July,1943, only three months after MGM released the groundbreaking Cabin in the Sky, 20th Century Fox premiered this, another all-black, all-star musical that celebrated the best of African-American entertainment. Stormy Weather’s revue style draws together the singing and dancing of a number of luminaries, including Cab Calloway, Fats Waller, singer Ada Brown, the Nicholas Brothers, pianist Dooley Wilson, and dancer Katherine Dunham. 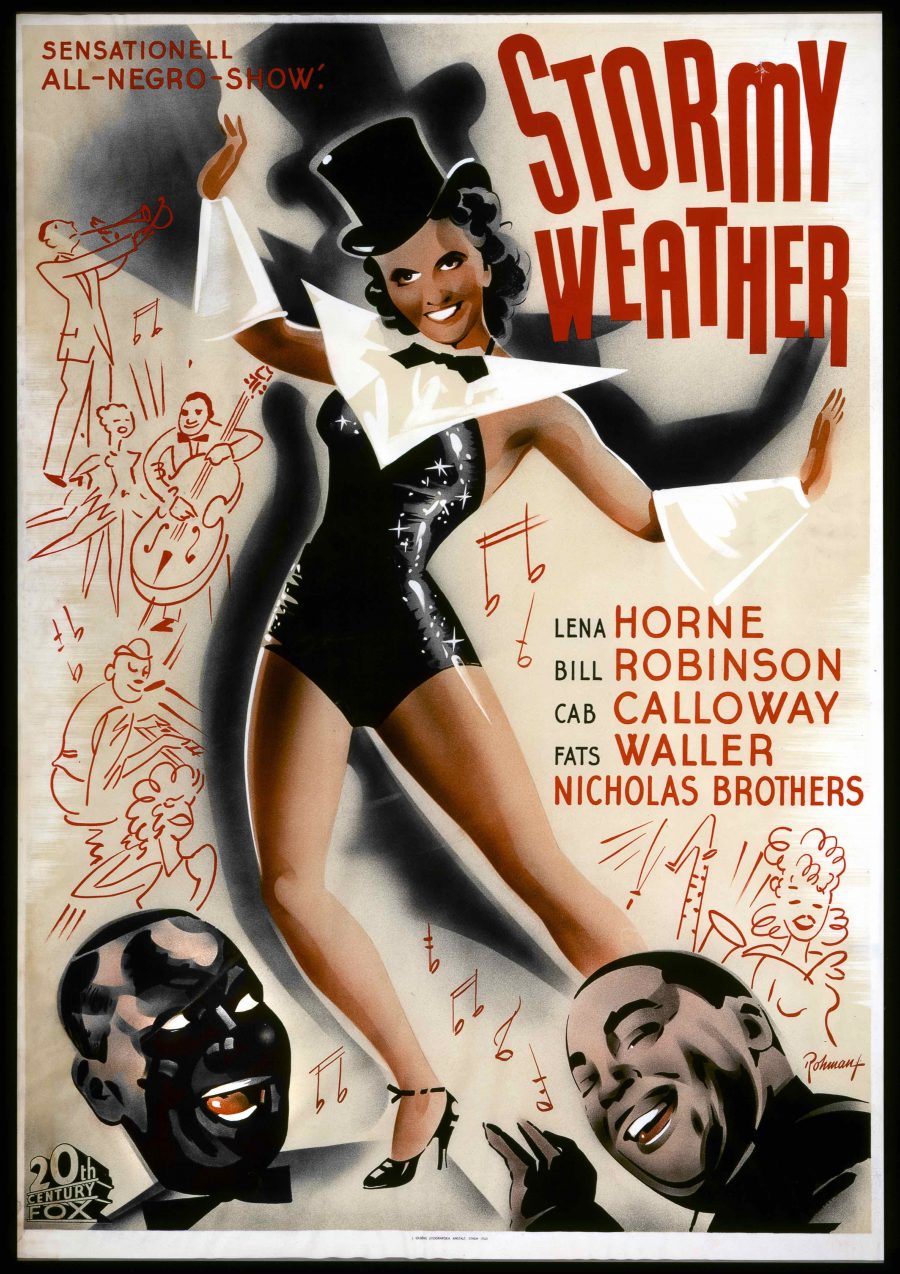 Independently produced by David Susskind and Philip Rose and directed by Daniel Petri (who replaced Lloyd Richards, the black director who had brought the play to Broadway), A Raisin in the Sun introduced many white moviegoers to black family drama. The film’s ensemble cast, which included Ruby Dee and Diana Sands, and its unerring exactness in depicting the problems and concerns of the ghettoised black working class made the film not just a compelling study but also a landmark film. 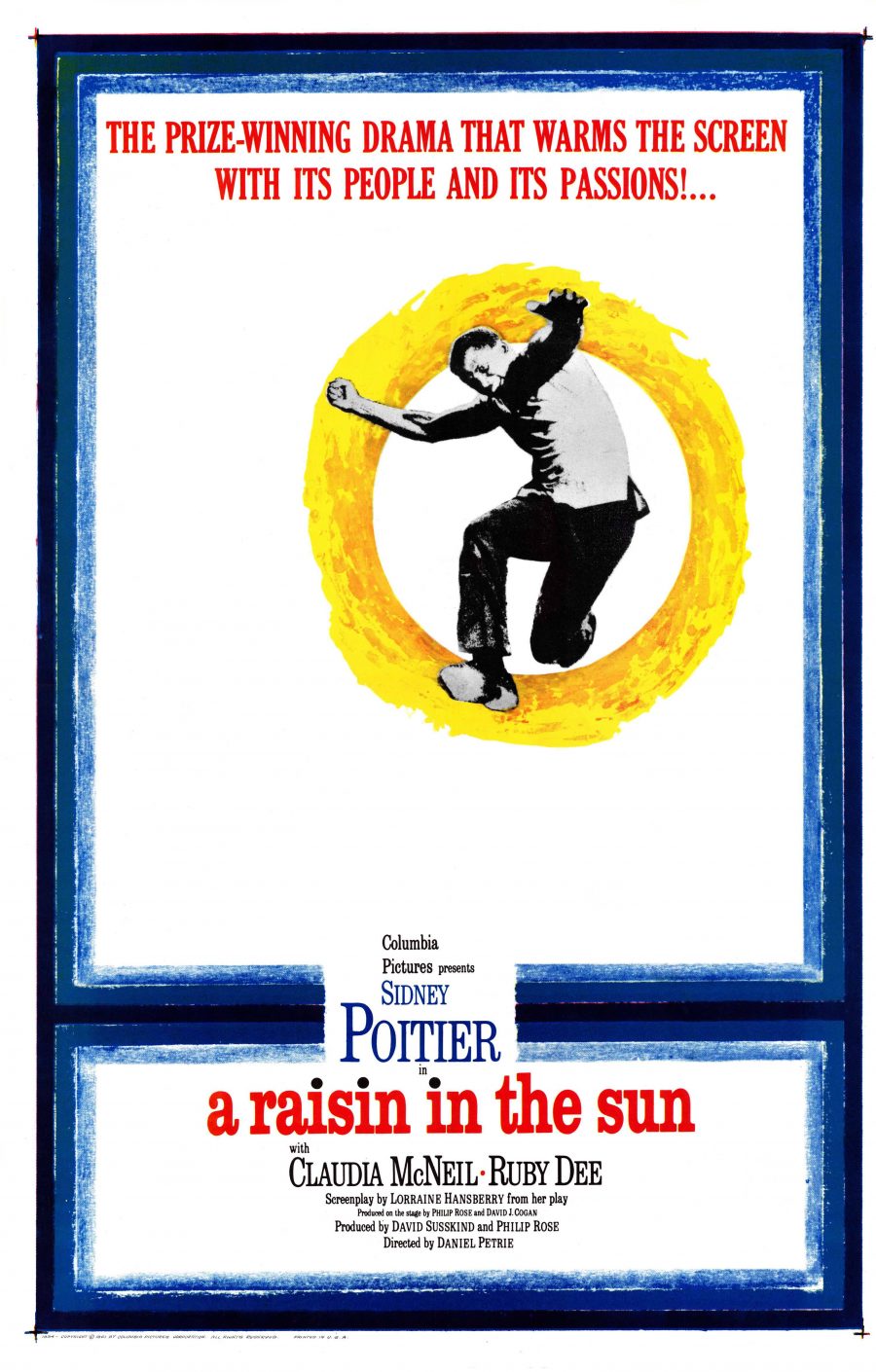 Sidney Poitier plays Virgil Tibbs, a well-dressed black stranger who is picked up on suspicion of murder but turns out to be a homicide detective who embarrasses the bigoted white Sheriff (Rod Steiger) with his shrewd investigative skills. The film was nominated for seven Academy Awards and received five, including Best Picture, Best Actor (Steiger), and Best Screenplay (Stirling Silliphant). Although Poitier did not receive a nomination, he reprised his role as Detective Tibbs in two other films, They Call Me MISTER Tibbs! and The Organization. 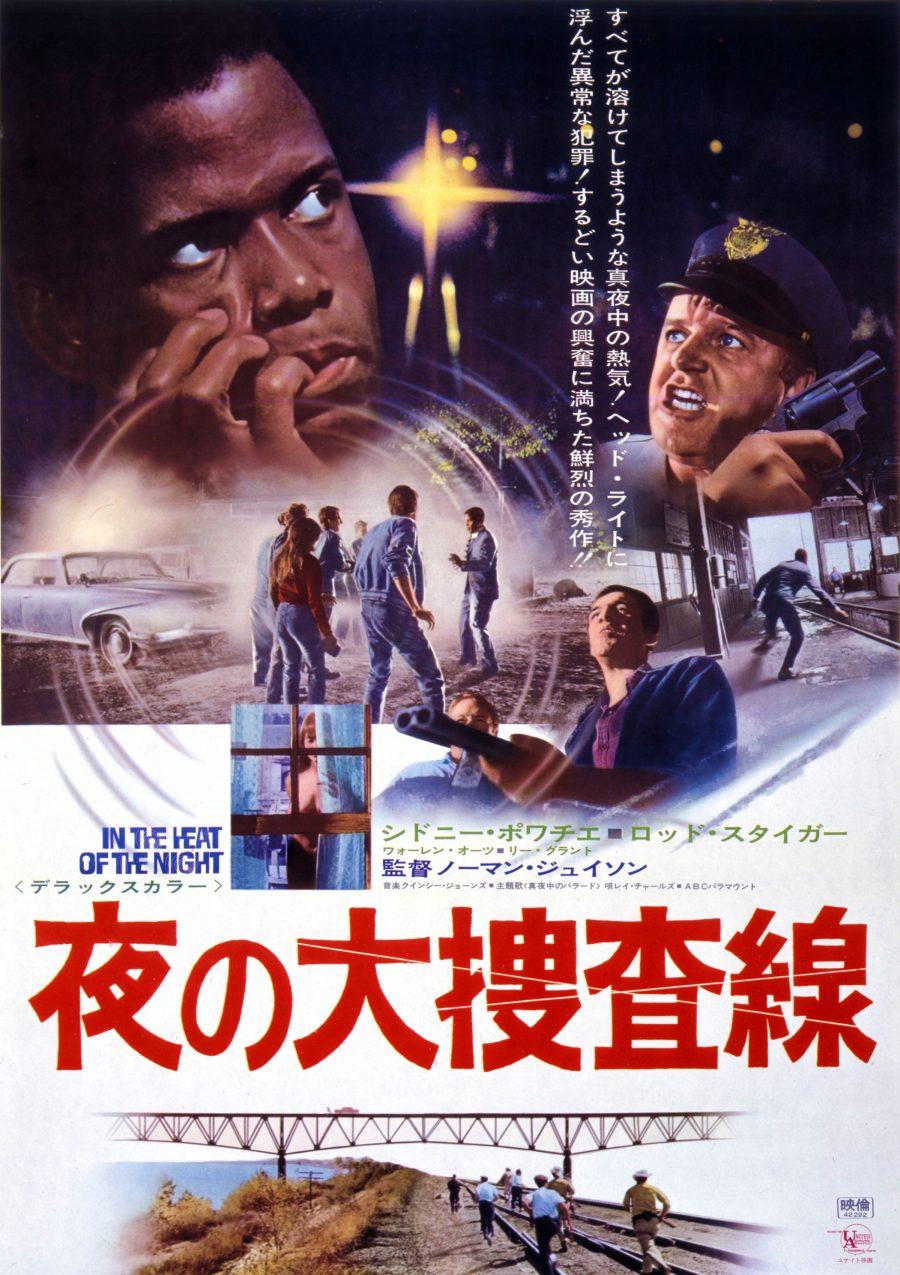 This crossover film, along with Sweet Sweetback’s Baadasssss Song (1971), helped launch the 1970s explosion of the blaxploitation genre. Director Gordon Parks, Sr (the first black director to helm a Hollywood studio film, The Learning Tree) hired Richard Roundtree to play John Shaft, a black superhero and renegade detective. Made at a cost of $1.5 million, Shaft grossed over $12 million and saved MGM from financial ruin. Isaac Hayes’ Academy Award winning soundtrack, was in the charts for well over one year. Shaft’s appeal to contemporary audiences resulted in both sequels and imitators, as well as black female superwoman movies like Foxy Brown. 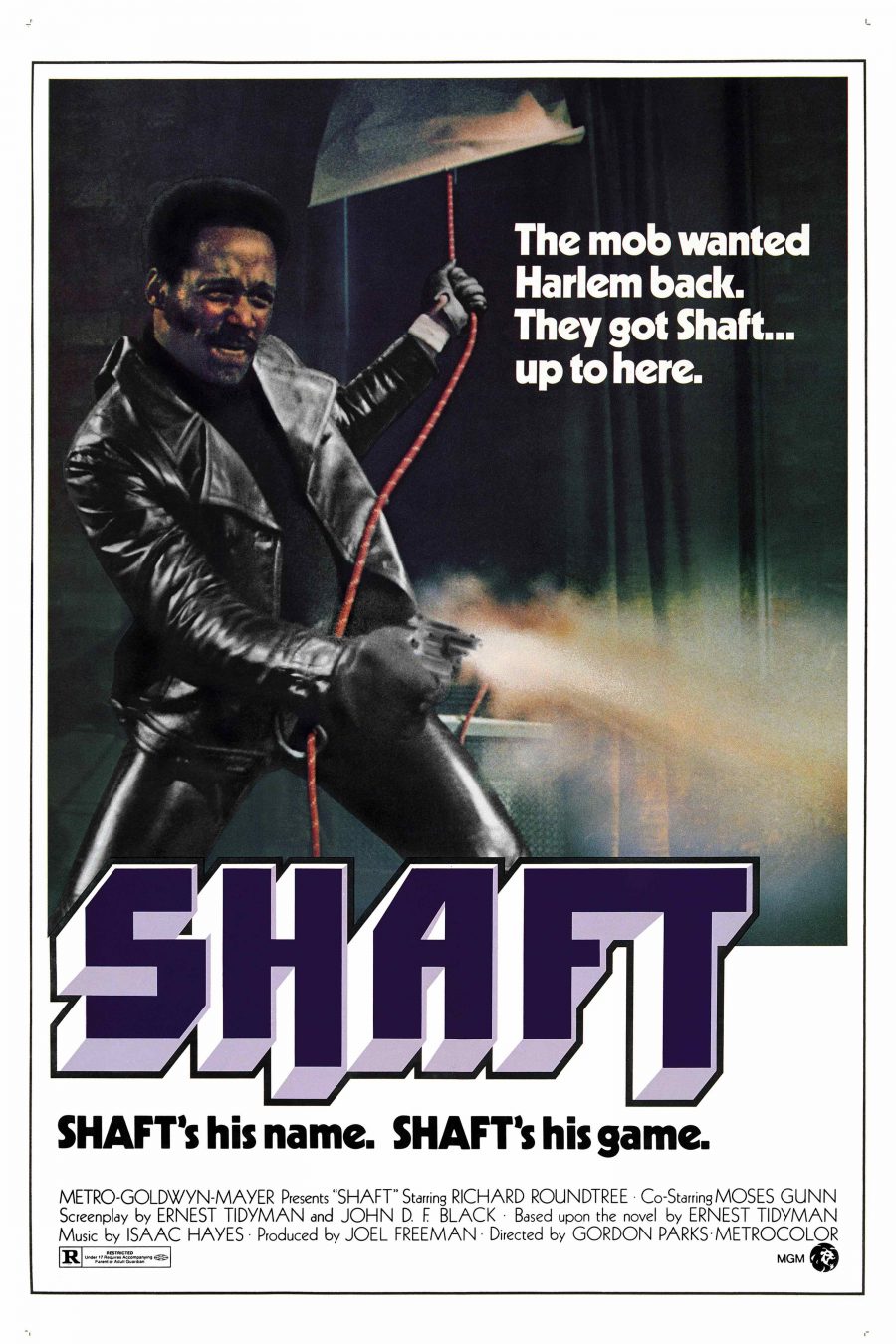 Foxy Brown was the successful follow up to the highly profitable Coffy and was director Jack Hill’s fourth and final film with Pam Grier. It was released in the US in a double bill with Truck Turner, featuring Isaac Hayes. Grier featured in a series of Blackploitation movies in the 1970s becoming identified as a gun carrying female crusader – a reputation that Tarantino partly paid homage to, casting her in Jackie Brown. Renowned Motown hit writer Willie Hutch wrote the score. 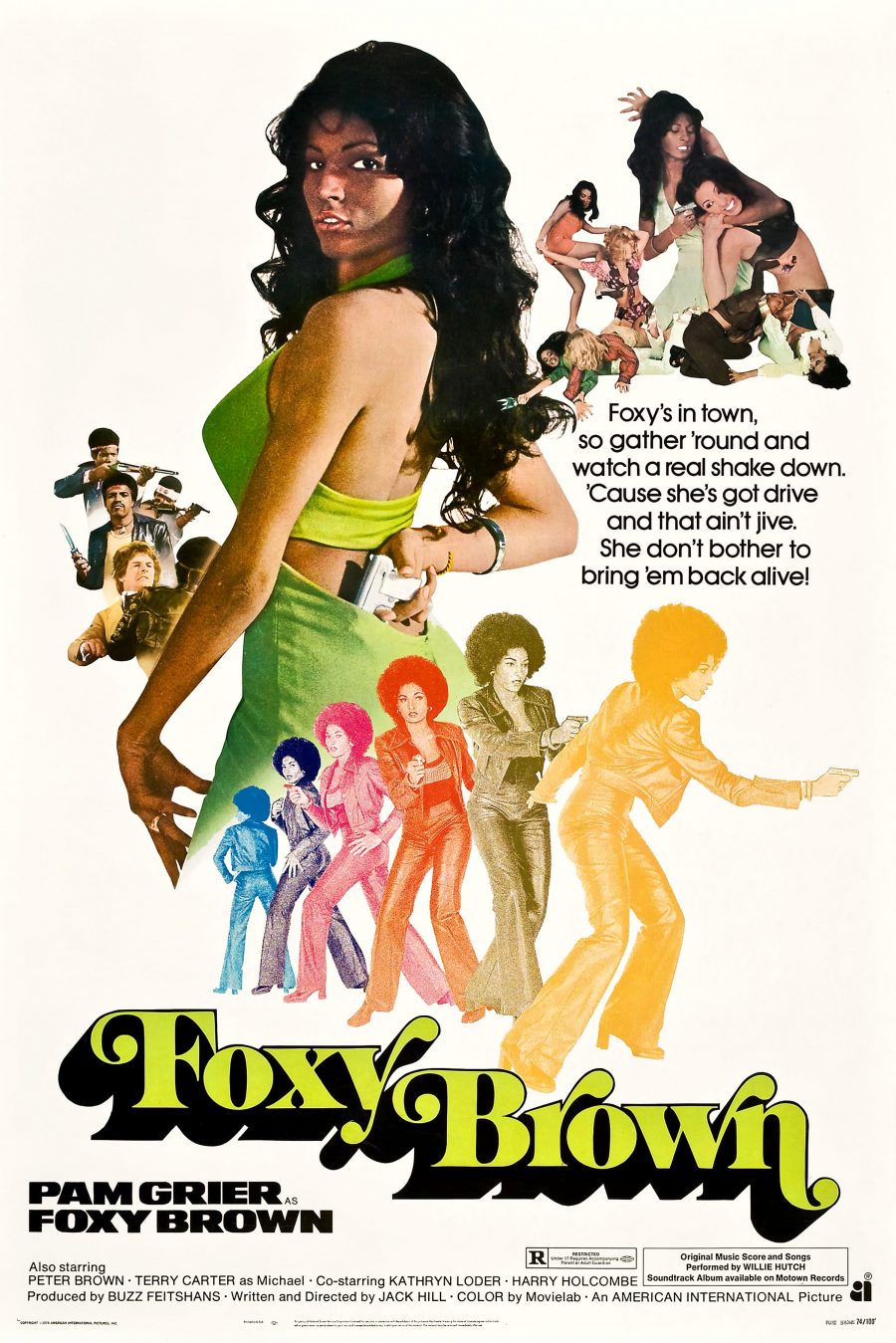 In a departure from his formula wise-guy character that early ’80s audiences were accustomed to, Eddie Murphy stars in this modern romantic fairy tale as twenty-one year old Prince Akeem, heir to the rich, fictional, African kingdom of Zamunda. Director John Landis had previously worked with Murphy on the highly successful Trading Places. The following year CBS filmed a pilot for a spin off TV series but this did not take off. Fun fact: Coming to America was Cuba Gooding Jr.’s first film as ‘Boy getting Haircut’. 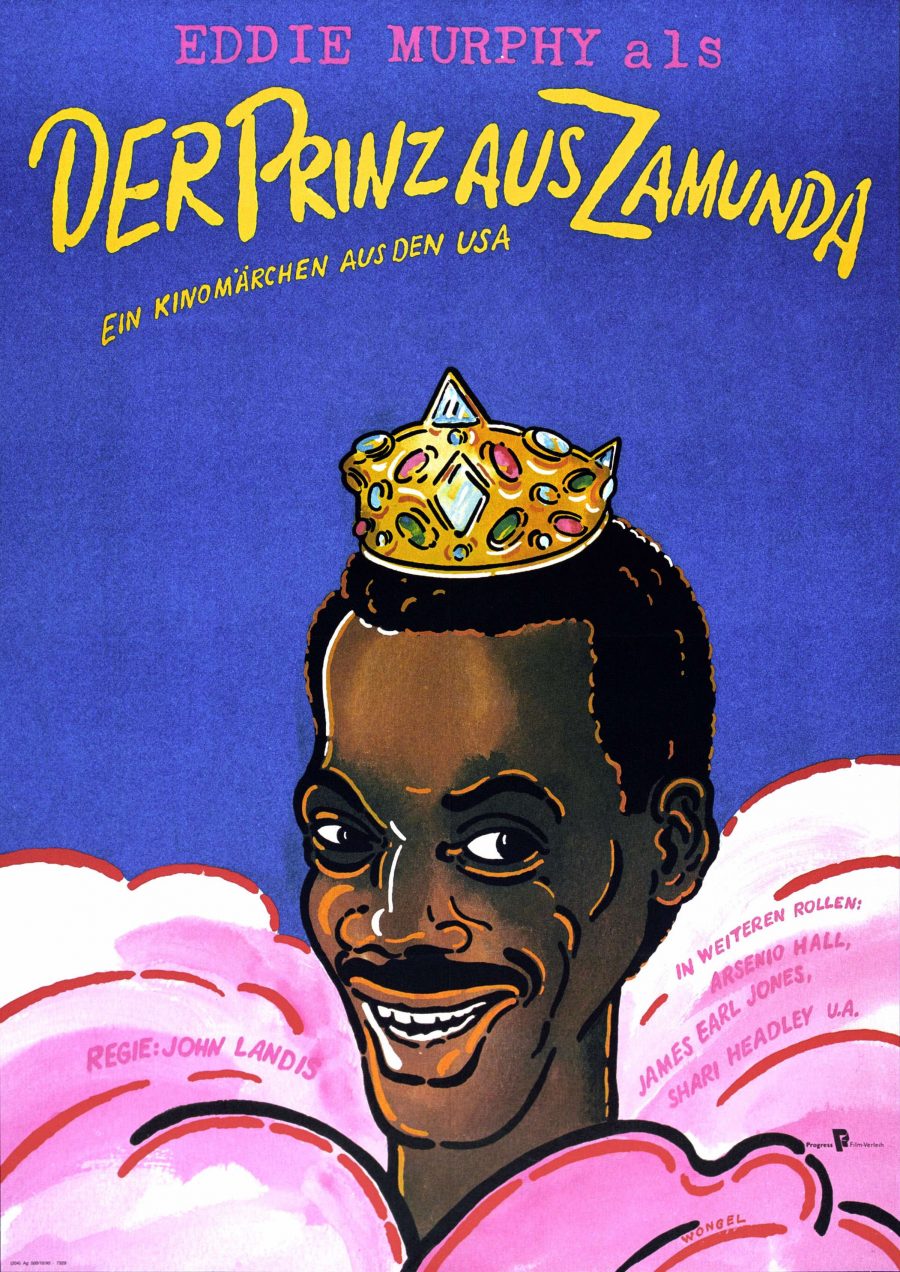 Early Hollywood portrayals of African-Americans in stereotypical roles are a source of anger and embarrassment decades after those images disappeared from the screen. Director Spike Lee’s provocative Bamboozled revisits those images. A satire of a 21st-century minstrel show, the movie parodies blacks on television and film today, and questions just how much progress Hollywood has made.
The title of the film refers to a speech in which civil rights activist Malcolm X states, in reference to African Americans, “You’ve been hoodwinked. You’ve been had. You’ve been took. You’ve been led astray, led amok. You’ve been bamboozled.” 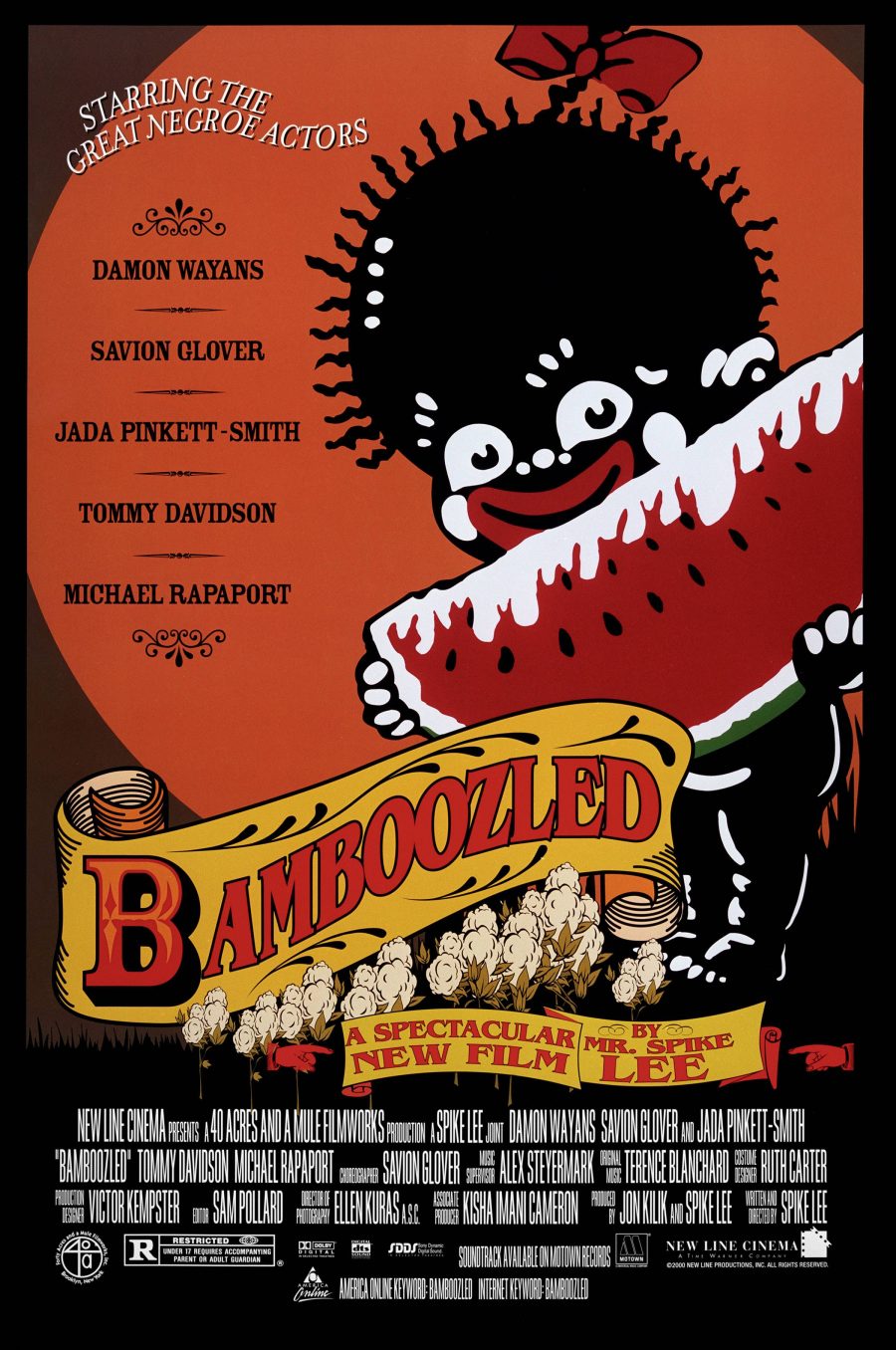