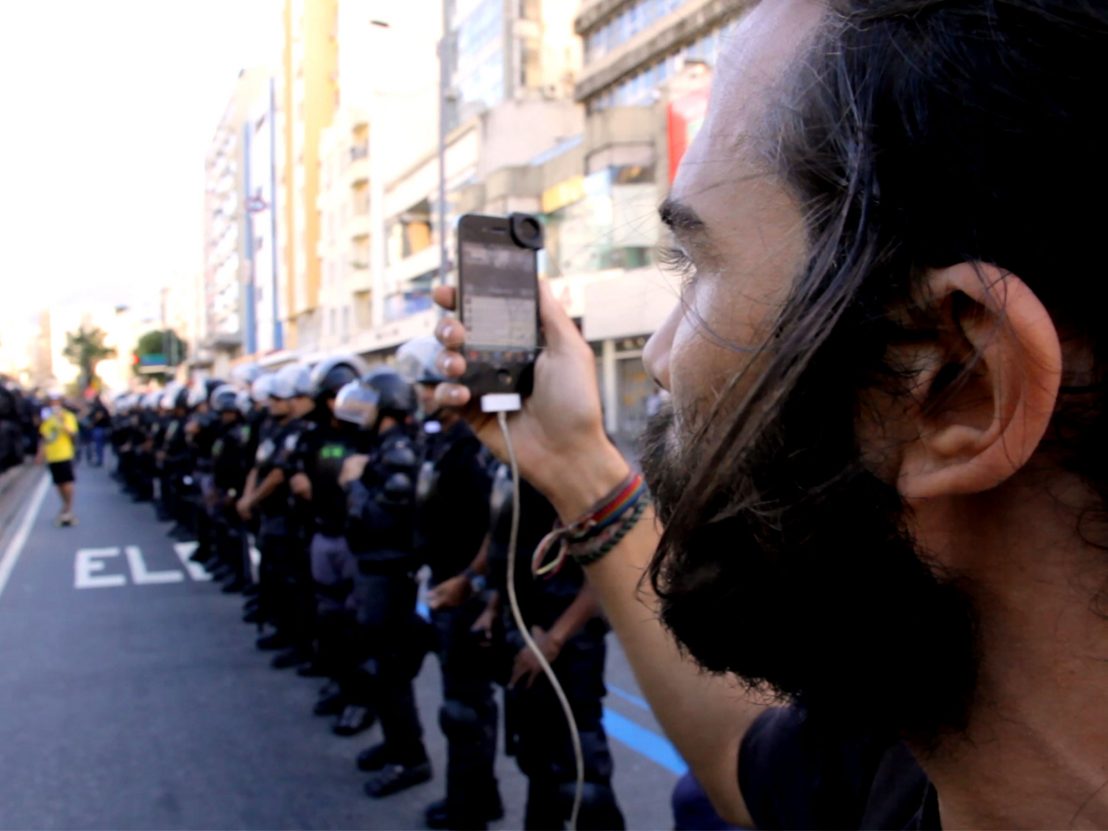 Shadowing The Citizen Lab – a team founded in 2001 that travels the world to expose global digital espionage – de Pencier paints an urgent, balanced and affecting picture: surveillance on the one side, digital activism on the other. As the battle for control of cyberspace is waged, our ideas of citizenship, privacy, and democracy are challenged to the core.

Inspired by the memoir ‘Black Code: Inside the Battle for Cyberspace’ by The Citizen Lab’s director Ronald J Deibert, de Pencier broached a documentary subject altogether new to him. He served as producer on 2006’s Manufactured Landscapes and 2013’s Watermark, both of which were directed by his partner Jennifer Baichwal. These visually arresting films focus on the gradual and the alarming effects of climate change and human industry on land- and waterscapes. Black Code, on the other hand, has a topical urgency and investigative verve that prioritises its subject over its visuals – and for good reason. What it covers is nothing short of critical to the future of power, information, crime and democracy.

It’s been dubbed a “post-Snowden film”, and although Snowden himself appears throughout via FaceTime calls, crucially it looks past the impact of the individual. The Citizen Lab are “internet sleuths” who follow malware all around the global networks. They have teams of “cyber stewards” from various countries, with a special focus on regions where a mere Facebook post, tweet, or a web article can be enough grounds for torture, arrest, intimidation and blackmail.

De Pencier follow’s The Citizen Lab’s work in Pakistan, Jordan, Syria, Brazil and beyond. Through first-hand interviews and hidden camera footage, Black Code introduces many unheard voices – including some who have since been forcibly silenced in their pursuit of transparency and freedom of information – and follows The Citizen Lab as they reveal both the criminal forces that are increasingly insinuating themselves into cyberspace, the governments violating their citizens’ privacy in the name of “national security”, and the risky work of ordinary civilians who are using the internet to fight back.

Perhaps the most intriguing story is that of Sabeen Mahmud, a Pakistani female activist killed because of her social media presence. An advocate of open internet, she publicly voiced her criticisms of Pakistan’s on-again, off-again censoring of Twitter, Wikipedia, and YouTube, among others. Yet it was Sabeen herself that was most under threat: hate speech from conservative male observers built to a frenzy, with death and rape threats a regular occurrence. She was shot by armed gunmen in April 2015 on her way back from hosting a seminar. Hers is a harrowing example of the personal cost of internet activism which seeks to destabilise authoritarian and patriarchal systems.

“In the West, these topics can seem more theoretical,” de Pencier has said. This is precisely why he included stories like Sabeen’s – to “connect the dots” between the seemingly small human rights violations happening today and the real-world consequences they may have tomorrow.

Yet Black Code has plenty of stories of resilience and ongoing success, too. When Syrian opposition politician Noura Al-Ameer received emails purporting to reveal “Assad Crimes”, she savvily forwarded them to The Citizen Lab. This led to the Lab’s researchers discovering an elaborate cyber-espionage campaign operating out of Iran. They subsequently uncovered several malicious campaigns run by the same hackers, Group5. These findings showed how civil society groups are persistently targeted by digital malware campaigns, and that their reliance on shared social media and digital mobilisation tools can be a source of serious vulnerability. State-funded belligerent groups are growing adept at borrowing the language and style of the political opposition or of civilian democracy activists.

In promoting the internet as a powerful agent of resistance, Black Code preaches constant vigilance among everyday users. It is a new kind of battleground, a great levelling arena where real-world power imbalances between powerful states and oppressed civilians can be redressed. But the internet can also, by its very nature, facilitate the surveillance and manipulation of civil society. For this reason, Black Code is not to be missed. It is a timely work that shows why the fraught relationship between democracy and the internet is the most important conflict of our troubled modern times.