The Baywatch movie gets a suitably tongue-in-cheek trailer

Okay, we admit it, we’ve always had something of a soft spot for Zac Efron. But, at 29, isn’t it time he stopped playing loud-mouthed, shot-slamming dudebros? From this early look, the Baywatch movie may just contain the answer to that question. It stars Efron as the crudest, dudest member of this all-new, all-American lifeguard squad, alongside Dwayne Johnson and Alexandra Daddario.

Efron’s macho antics and orange perma-tan don’t exactly point towards his natural crime-solving ability, and our guess is that Seth Gordon’s big-screen reboot of the ’90s TV show will be as broad humoured as they come. That said, there’s a knowing tongue-in-cheek charm to this trailer, and it will be interesting to see whether or not Gordon and the film’s writers can sort out the original show’s suspect gender politics. Whatever the outcome, it looks like we’re going to be left waiting for Efron to finally come of age. 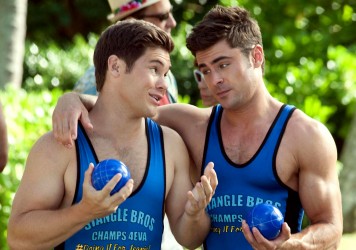