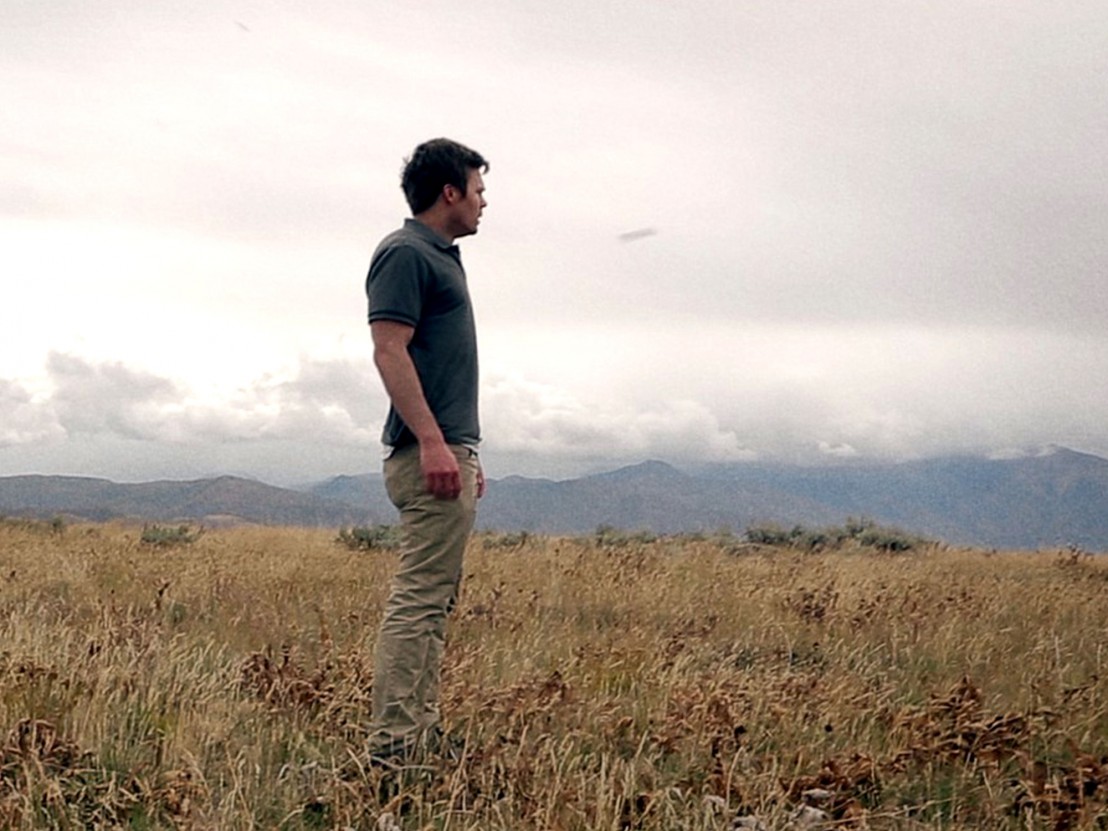 All this is shot up close, and could come from any romance. The couple, followed reluctantly by the other people in the house, head out into the suburban street – which is littered with human bodies. Overhead, a jet plane is engaged in a dogfight with a spacecraft. “Now that we’ve got time, I want to talk about what we were talking about earlier,” the young man says to his partner as they continue walking, “We can work on this.” Yet the relationship troubles hinted at in these words are interrupted by a laser attack, and the sequence ends with the woman, still alive and terrified, lying under the corpse of her beloved.

If Alienate begins in medias res, that is just one of several alienation effects that the film will perpetrate upon the viewer, chiefly via time-leaping edits, as it constantly confuses the vehicle and tenor of its own central metaphor. This is hardly the first film to exploit aliens for their figurativeness. Both Steven Spielbeg’s War of the Worlds and the Strause brothers’ Skyline – to name but two films referenced in Shumway’s ground-eye view of all-out alien invasion – freighted their aggressive outsiders with considerable metaphorical heft. For in the former, the aliens embodied the ravages of war on civilians, as well (this being Spielberg) as the breakup and eventual reintegration of the family; while in the latter, aliens represent one man’s anxieties about his impending paternity and the world-destroying changes it would bring to his life.

In Alienate those extra-terrestrial invaders symbolise the forces that drive couples apart, and bring them together. For as workaholic David Madison (Blake Webb), away on business, drives interstate with increasing desperation to get back to his wife Amy (Tatum Langton) in Salt Lake City, a complex series of flashbacks and flashforwards reveals both the freefalling breakdown of his marriage, and the sudden takeover of the planet by merciless marauders.

En route, David experiences a long dark night of the soul when he must, for the first time, envisage a life apart from Amy, now that he is realising he may be separated from her forever. The aliens, though a very real presence in the film, seem merely to give physical expression to the apocalyptic collapse of David and Amy’s coupledom, and to their fear – a fear felt by so many single people, including David’s work colleague Ryan (Jack Diamond) – of dying alone.

This is why David falls in with fellow fugitive Samantha (Jaclyn Hales), herself separated after seven years of marriage, and helps her on her way to (emotional) rescue. It is why Amy is seen discussing with her elderly neighbours the secret of their long and happy marriage. And it is why both Amy and David tell stories of their adultery (when their relationship, like their lives right now, were threatened by outsiders). Meanwhile the couple’s alienation from each other, both geographical and psychological, is underlined by the film’s very form – the constant intercutting, the chronological chaos – which keeps this pair apart and at odds with one another, while also keeping the viewer engaged in the business of reassembling the film’s narrative puzzle.

Needless to say, the editing is the film’s strongest asset. Yet amid all the relationship drama, the extra-terrestrials seem merely a deadly catalyst for the human condition – which is just as well, given that, once they appear and start shooting their rayguns, these aliens are also a little on the naff side. Best to view them entirely as metaphor.