Sidney Lumet’s 1957 film is a perfect example of how to combine character and setting. 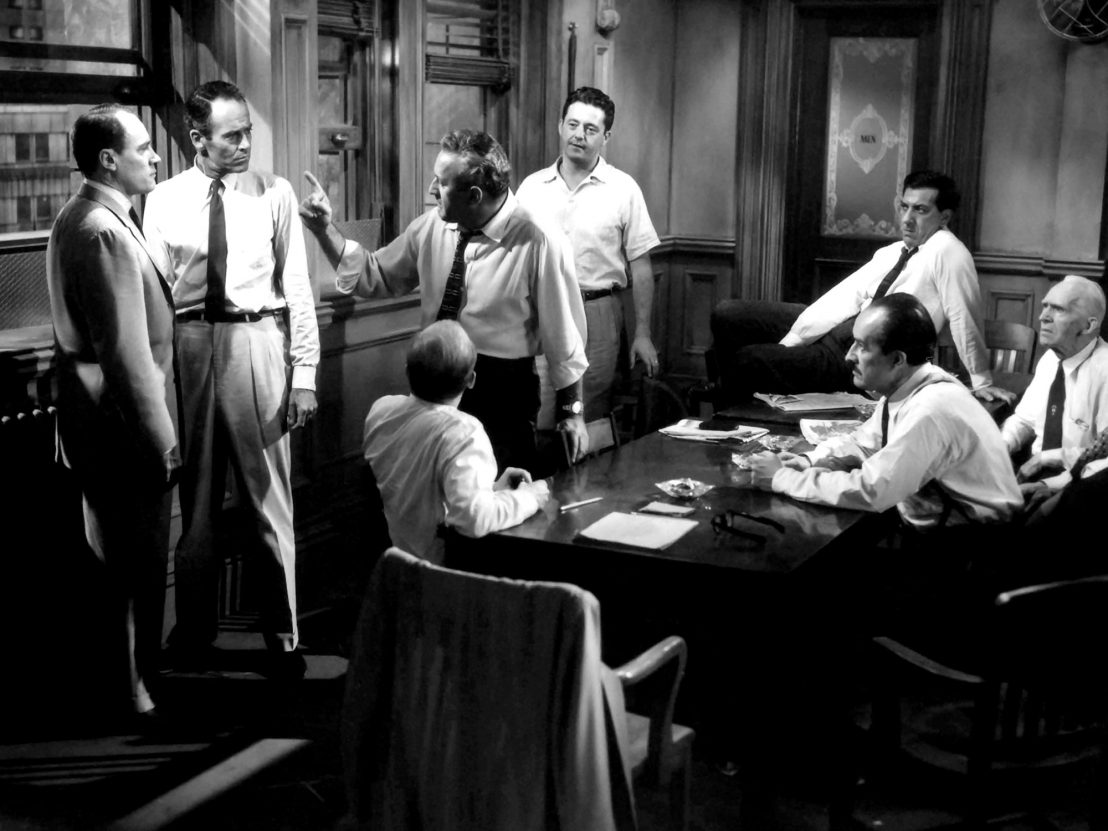 What makes a great ensemble drama? Is it simply down to the cast and how they are directed, or do other elements hold just as much weight? Sidney Lumet’s 1957 film 12 Angry Men boasts one of the most talented casts ever assembled. But the film’s greatness also lies in its use of a single location setting.

The courtroom drama, revolving around jurors deliberating over a murder trial, questions our morality as a society when confronted with the task of coming to a verdict that will decide someone’s fate. As the film’s tagline states, ‘Life is in their hands. Death is on their minds’.

Throughout the film we see Henry Fonda’s Juror 8 stand alone on the ‘not guilty’ side of the fence as he tries to win over his fellow jurymen. Not convinced of the accused’s innocence himself, he simply wishes to discuss the outcome of the case beyond a reasonable doubt, something the other 11 men seem unwilling to entertain.

Considering the film is essentially just 12 men arguing around a table for 90 minutes, Lumet had plenty to consider in terms of how to craft a compelling drama, from the positioning of the characters to the amount of sweat dripping from their brows. The cast themselves are exceptional to a man, playing off one another superbly as the stronger personas assert their dominance, brushing aside the weaker characters like feathers in the wind. More importantly – and key to any successful ensemble piece – not a single one of them is superfluous.

All 12 men hold purpose and present themselves admirably throughout, both as individuals and within the collective group. Being cooped up in the 16ft by 24ft room forces this out of them. The cast were locked in a small rehearsal space together for two weeks prior to filming, so it’s no wonder they appear so natural in their confined surroundings. As a side note, it’s ironic that in a film about 12 men stuck in a room, the majority of the filming was done with only one or two of the cast present for any given shot due to restrictions on camera placement.

Lumet, in what was remarkably his first feature as a director, masterfully manipulates the juror’s isolation from the outside world, while keeping the viewer in a constant state of tension. Blood runs high, tempers flair and the walls actually feel like they’re closing in – the latter being thanks to some subtle and ingenious camera work.

Spending so much time meticulously crafting the character of the room itself, seemingly trivial details are imbued with added significance. Taking interest in a broken fan as he enters the room, Jack Warden’s Juror 7 notes that it’s going to be the hottest day of the year. This heat visibly rises as the film unfolds, intensifying the men’s frustration and turning the mundane task of taking off a jacket into a symbolically powerful image.

But it’s not just what’s going on in front of the camera that makes the film so effective. Early on, the average shot length is around 20 seconds – not uncommon for films made around that time. Yet around half of 12 Angry Men’s cuts occur in the last 20 minutes of the film, a conscious ploy by Lumet and editor Carl Lerner to gradually lure us into a state where we are completely caught up in the central argument.

Initially Lumet shoots the characters from a wide angle, to show that they are still finding their feet and establishing themselves. We are introduced to the men individually as each shares their personal opinions of the case. In the film’s second act, the camera drops to the characters’ eye level. Some of the jurors have switch sides and the discussion is becoming increasingly heated.

As the third act ticks around and the power balance between the characters (specifically Juror 8 and Lee J Cobb’s stubborn Juror 3) continues to shift, the camera again shifts, this time adopting an even lower angle. This not only gives certain characters more supremacy, but crucially it means we can now see the ceiling. As Lumet himself once noted that, “The sense of increasing claustrophobia did a lot to raise the tension of the last part of the movie.”

Sixty years on, 12 Angry Men remains a consummate ensemble drama. Rounded out by an incredible cast, Lumet’s realisation of Reginald Rose’s script didn’t require anything too bold or exaggerated. It simply took 12 men in a single room with something important to talk about.