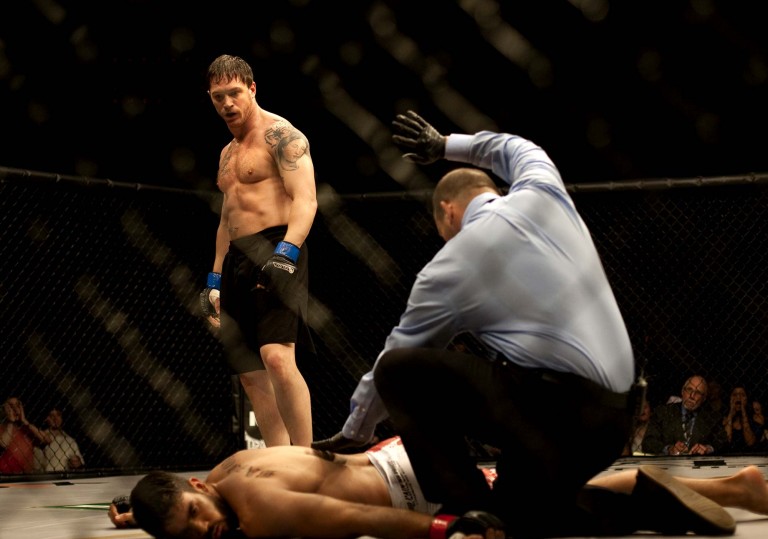 Sickly sentimental, but the barnstorming fight scenes will leave you counting stars.

Tom Hardy, greased up like a rotisserie Chippendale and with shoulders you could land light aircraft on, is solid-as-fuck cagefighter Tommy Conlon. A former UFC child prodigy with a snarl that could curdle diesel, Tommy turns up on his estranged father’s (Nick Nolte) doorstep in wrong-side-of-the-tracks Pittsburgh after turning his preposterously contoured back on his military service.

Putting his deep-rooted bitterness aside, Tommy and his crestfallen pa resume the gruelling training regime that brought them success years before. Meanwhile high school teacher Brendan (Joel Edgerton, given his Hollywood shot after impressing in ace Melbourne crime drama Animal Kingdom), faced with the threat of having his family home repossessed, calls upon an old friend to help get him back in shape.

Their forked path is about to realign. A local sports entertainment entrepreneur has organised a winner-takes-all mixed martial arts tournament in Atlantic City, and both men have the unprecedented purse set firmly in their sights.

Despite the dramatic weight provided by Hardy, Edgerton and notably a poetically sullen Nolte, director Gavin O’Connor streamlines the domestic trauma aspect of the narrative, choosing instead to indulge in extended montage sequences and teeth-grindingly realistic fight scenes. But he’s not guilty of wasting the acting talent at his disposal.

Rather, in obscuring the full picture and keeping these damaged men at arm’s length, he grants the audience autonomy over which (if any) of the characters are deserving of emotional investment. We’re left rooting for no one in particular, transfixed and totally exposed to the sentimental suckerpunch on which the film’s climax hinges.

David O Russell’s use of in-ring television camera style footage in likeminded underdog bruiser The Fighter was inspired, but there’s no such nuance here. O’Connor’s film is all about the show, the thrill of the fight, the orchestral, fist-pumping glamour of planting your opponent’s face on the mat and making him tap. It’s shot accordingly, with rapid cuts and wince-inducing close ups utilised to the max. Yet while its excess is its greatest strength, Warrior ends on a life-affirming note.

As Tommy and Brendan exit the stage on which they meet as foe and kin, weary and tender like pummelled cuts of sirloin, they enter another, metaphorical cage. One they must tackle glove-in-glove, not toe-to-toe.

Sickly sentimental, but the barnstorming fight scenes will leave you counting stars.