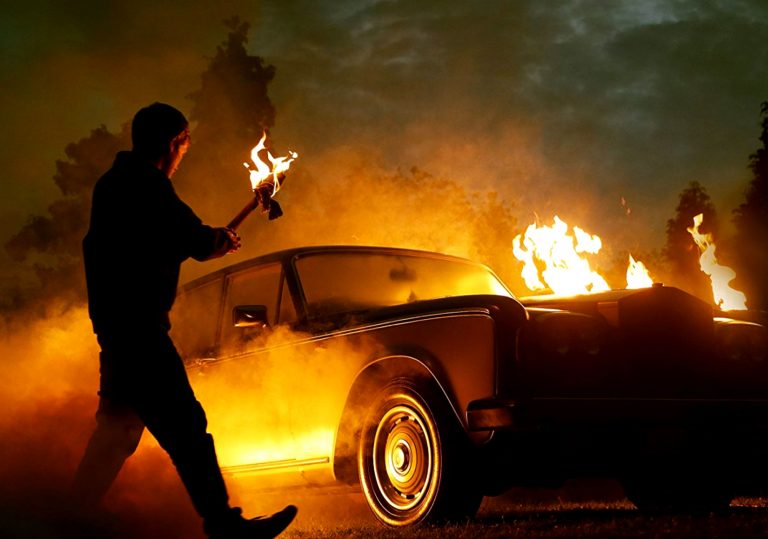 Whittling down a checklist of director’s visual flourishes is diverting fun.

The stab at class conflict ends up less classy and more conflicted.

A rat flails about in a vat of water. It claws at the edges, cries out for help, and eventually accepts its fate. Jack Roth’s Danny – a young, gaunt and working class anarchist – argues that our current socio-economic climate will meet the same grisly end. His solution? Wield a plastic gun with enough rage-fuelled conviction to make it seem real, take a wealthy family hostage, and ask them to gamble on their lives.

Watching his scheme play out is like ogling at an auteur pick ’n’ mix. There’s the grounded violence of Ben Wheatley, the playful banter of Guy Ritchie and Spike Lee pops up to egg on our characters as they spew class-centric insults at the camera. Kubrick, too: with a soundtrack heavy on the classical and brandishing a discontented youth at its epicentre, Us and Them is essentially A Clockwork Orange repurposed for the post-Brexit era.

It shouldn’t work – Martin has thrown everything and the kitchen sink drama at his film, but Us and Them is stylish, however heavily borrowed that style is, and the script’s hyperactivity distracts enough from the fact that its musings on class conflict are underdeveloped at best.

Beginning on the day of the crime and flitting through a glut of flashbacks, the film’s structure is as tightly woven as it is desperately erratic. With his characters operating solely in the confined spaces of a lavish mansion, you can sense Martin doing everything in his power to avoid an inherent staginess. And so we have tongue-in-cheek title cards that blare out on screen whenever they please, and camera swivels dizzying enough to induce nausea.

Us and Them offers up an undeniably frantic, nutty 90 minutes, but Martin’s insight towards our socio-economic divide is lost amid the racket. Perhaps that rat just wanted to drown out the noise.

Whittling down a checklist of director’s visual flourishes is diverting fun.

The stab at class conflict ends up less classy and more conflicted.