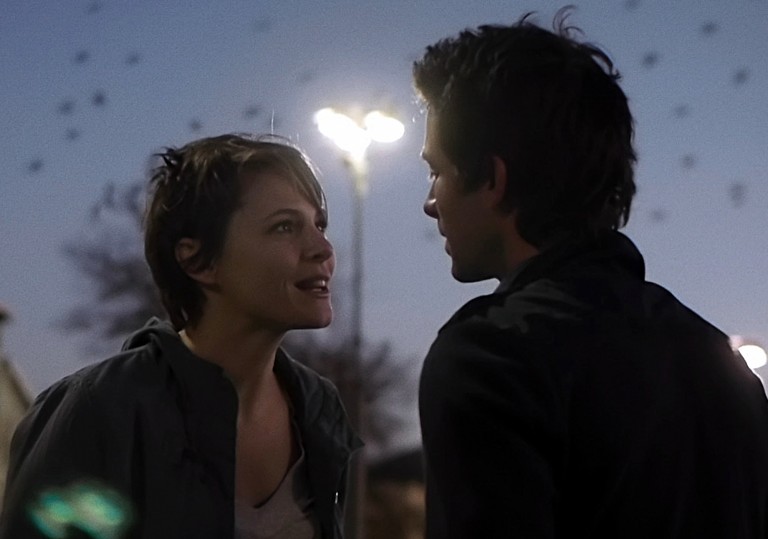 It's been almost 10 years since Shane Carruth's riveting debut, Primer. Has he been caught in some sort of temporal feedback loop?

In 90 glorious minutes, Carruth goes on a search for the meaning of life, love, nature and the whole bit.

In attempting to convey the mind-scrambling complexity and diamond-eyed precision of their task to the general public, the atom-smashing scientists of the Large Hadron Collider — the 27km-long particle accelerator buried hundreds of metres beneath the Swiss borderlands — invite us to consider the analogy of two precision clocks being fired at each other at a velocity approaching the speed of light. Now imagine collecting up all the gears, sprockets and flywheels from the resultant collision and trying — without the aid of an instruction manual — to piece them all back together. Welcome to the cinema of Shane Carruth.

It’s been nigh-on 10 years and sundry false starts since his white-collar time-travel headscratcher Primer confused as many as it dazzled with its rigorous hard-sci premise, oblique, tech-heavy dialogue and byzantine temporal twisteroos. It was a perplexing experience that toyed with notions of memory and identity, a film that simply demanded to be pulled apart by audiences in order to be put back together. Now, at last, he returns with the muted symphonic majesty of Upstream Color, a film that ups the ante of his toolshed sci-fi aesthetic considerably.

Viewing Upstream Color is like getting somebody else’s holiday snaps back from the printers and being tasked with building up a portrait of their entire lives — past and future — from a few bleary, foggy, sunburned images. If Primer was a cinematic finger-trap, Carruth’s latest is like trying to complete a crossword in which the clues and grid are forever in flux.

The plot arrives in elliptical fits and starts, like birds swooping around your head. We get impressionistic bursts of young teens getting high in suburban Dallas, their joyous, innocent movements synchronised into hypnotic union by a drug distilled from a larval worm that nests in the roots of orchids. But in the hands of The Thief (Thiago Martins), the drug has a far darker purpose, allowing him to dope hard-living yuppie Kris (Amy Seimetz) then trick her into giving up her life savings. Once she’s been fully fleeced, he skedaddles, leaving her with vague memory lapses and a ghastly parasitic worm slowly growing inside her.

Presently we meet The Sampler (Andrew Sensenig) — possibly cinema’s first pig-farming/foley artist hybrid character — who extracts the worm from Kris in order to patch it into one of his porcine charges. Orchid Mother, who harvests the plants that have grown from the nutrients given off by the bodies of The Sampler’s dead piglets, completes the cycle and begins the mystery at the heart of this baffling, exotic and staggeringly moving film.

None of this makes any great sense on paper, but Carruth directs with the script in his back pocket, preferring to allow mood, texture, music cues and careful, layered intercutting to tell his story. He has moved away from the necessarily tight plotting that underpinned his debut and has since become a remarkably assured visual dramatist. Kris’ halting second-act romance with the similarly drugworm-damaged Jeff (Carruth), for instance, is conveyed via a spare series of near-wordless snapshots that are as heartbreaking as they are formally and technically accomplished.

It’s an approach that allows Carruth’s major themes to eventually come gently bubbling to the surface. Reinvention — that most American of ideals — figures prominently among them. ‘If you want to understand something, build it’, runs another scientific axiom, and Kris and Jeff, stripped of everything including their memories, have to rebuild themselves from the ground up in an attempt to reassert — and reassure themselves of — their own individual natures.

It’s a dilemma with which the time-travelling doppelgangers of Primer literally came face-to-face. If we are confronted with a carbon copy of ourselves, are prey to rogue memories or have a history of dependence, how can we be sure what it is that makes up the very essence of who we are? It’s a question Philip K Dick posed again and again in the novels that inspired such films as Total Recall and Blade Runner.

The scramble for individuality and the breaking up of established patterns and cycles pours through every hi-def pixel and sublime image of Upstream Color. Carruth himself wrote, directed, produced, shot, edited and wrote and recorded the magnificent soundtrack for a film that he claims is unsullied by even “a molecule of Hollywood”.

All of which might sound a little precious or worthy, but this is not some chill indie mood-board, but a surging, propulsive visual experience that nudges us here, pulls us along there, until we emerge from the diffuse streams of the plot into the glorious, sun-dappled open water of a wordless third act in which Carruth’s audacity and nuanced themes build into a wave of nervous ecstasy that recalls both the dread-fidgets evoked by the climax of Hitchcock’s Rear Window and the uncomprehending awe that closes out Kubrick’s 2001: A Space Odyssey.

Carruth has not broken cinema down and rebuilt it, but he has prised it apart just enough to remove some of it’s overly-complex inner-workings and get it humming along to his own strange harmonies. The slimmed-down result is joyously idiosyncratic, agile and lean — and as any backyard scientist or DIY-buff will tell you, when you fix something, you should always have a few bits left over.

It's been almost 10 years since Shane Carruth's riveting debut, Primer. Has he been caught in some sort of temporal feedback loop?

In 90 glorious minutes, Carruth goes on a search for the meaning of life, love, nature and the whole bit.