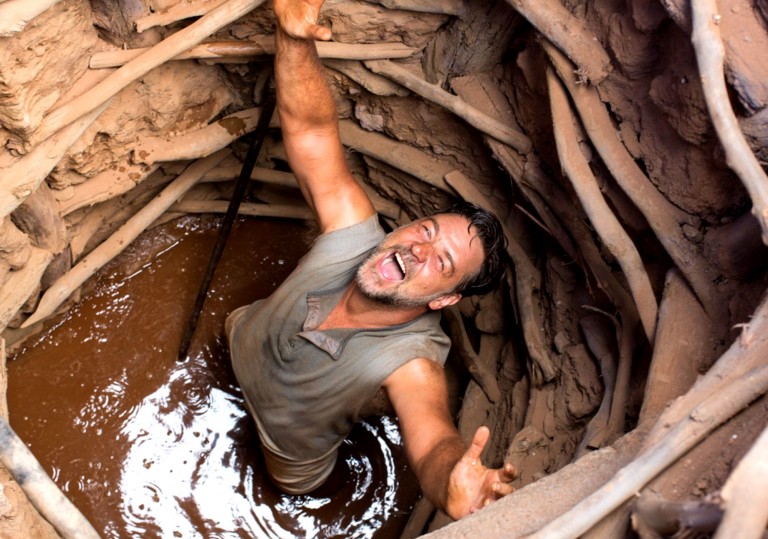 Russell Crowe has lost his lustre in recent years.

Sadly, it's only the ludicrous moments that really stay with you.

Russell Crowe is both in front of and behind the camera in this overegged historical saga.

Russell Crowe has always been unpredictable, both onscreen and off. It should come as no surprise, then, that his directorial debut is a tonally seesawing movie mishmash. The Water Diviner is an earnest family drama, a bruising battle film, a haplessly executed romance, with culture clashes and international politics thrown in for bonus befuddlement.

It’s a film that radiates with its director’s good intentions, from the sun-streaked outback opening — where an unassisted Crowe digs a well in a brazen feat of super-strength — to its attempt at a gently humorous, heart-warming finale. But Crowe and cinematographer Andrew Lesnie lay the glow on so thick it’s as if much of what we see is encased in amber.

Set four years after World War One’s bloody Battle of Gallipoli, it follows Crowe’s indomitable Australian farmer Connor as he travels to Turkey where his three ANZAC soldier sons are missing in action, presumed dead. Stepping off the boat in Istanbul laden largely with his own imposing, unrefined masculinity, Connor is immediately at sea in a city of bold colours and floating fabrics.

He’s singled out by a boy, Orhan (Dylan Georgiades), who leads him to the hotel of his beautiful mother Ayshe (Olga Kurylenko), a woman who has enjoyed a liberated lifestyle under European rule and who catches Connor’s eye. She’s in denial about the death of her husband and is involved in a cat and mouse courtship with her husband’s conservative brother Omer (Steve Bastoni), who is determined to take her as his second wife.

Later, when Connor travels to Gallipoli, he adapts his talent for water divining to the task of locating his boys’ bodies, to the bemusement of the assembled forces, befriending both an Australian in charge of identification (Jai Courtney) and a Turkish major (Yilmaz Erdogan), with the latter showing him great kindness and assistance in his quest.

Crowe’s ability to concisely communicate the horrors of war impresses, but his first narrative feature as director is also hugely disjointed. Although it boasts ferocious flashbacks and thankfully doesn’t endorse invasion or colonialism, the film offers a superficial treatment of the subject matter that fails to articulate any real insight, be it psychological or historical. It’s also occasionally prone to horrendous caricatures (the British stereotypes are especially awful) and other moments of astonishing misjudgement.

Most problematically, the film’s fairly noble ambitions are frequently thwarted by a tendency toward extreme sentimentality. The Water Diviner is almost completely undone by its laughable romantic scenes, which are as preposterous as perfume ads. A trip to an ancient cistern that begins frostily evolves into a playful water fight, relayed in barking mad slow-mo, while a whispered parting is the less-than-sexy, ‘Be careful on the tiles.’ Note to Crowe for next time: keep the war, ditch the romance.

Russell Crowe has lost his lustre in recent years.

Sadly, it's only the ludicrous moments that really stay with you.