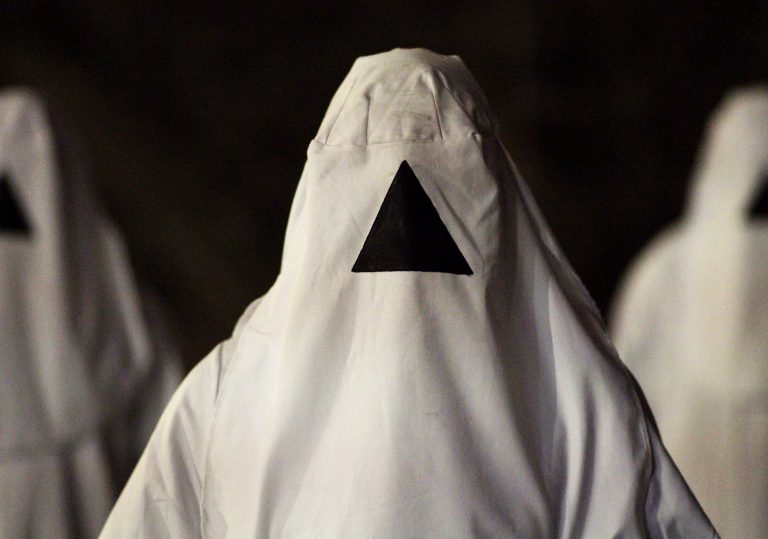 The graphic design of the poster is more tantalising than the movie it advertises.

Jeremy Gillespie and Steven Kostanski’s cosmic horror-thriller fails to live up to its initial promise.

There’s a scene in The Void when several of the protagonists descend a flight of stairs and find a heaving mass of moaning demons bathed in red light. One might think that image speaks for itself – and yet someone helpfully points out, “This is hell!”

It’s that polarity of attempting to inspire inconceivable fear and being anchored by mundane mediocrity that defines this cosmic horror-thriller. Neither restrained enough to be chillingly suggestive nor aggressive enough to be a rollercoaster, The Void thuds to the ground in splitting the difference.

Like John Carpenter’s The Thing or Prince of Darkness, the film combines a one-location siege with Lovecraftian invasions of the satanic and supernatural. A patrolman (Aaron Poole) finds a bloodied, sunken figure in a roadside ditch, and takes it to a soon-to-be-closing hospital run by the avuncular Dr Powell (Kenneth Welsh).

No sooner has Poole caught up with his nurse ex-wife (Kathleen Munroe), and re-commiserated with her over the loss of their child, than the pleasantries are interrupted by their mysterious patient lurching into a berserk stabbing frenzy and mutating into a tentacled ghoul. Meanwhile a clan of shrouded mutes marked by triangle insignias assemble a menacing periphery around the building.

The two directors have a background in craft – Jeremy Gillespie in art direction, Steven Kostanski in practical effects – so the film’s drab, unassuming visual style is a surprise. And if the filmmakers know how to crib situations from Carpenter, what they miss from his influence is a sense of pacing or atmosphere. That’s forgivable to a point, if one assumes they’re trying to avoid preciousness and pitch a sense of directness through the ambience of DTV mediocrity. But when the first intricately designed slithering monster appears at around the 20-minute mark, it’s natural to start wishing for cinema of greater discipline.

The Void doesn’t have the patience to build great suspense before doling out its first reveal, nor does it have the eye to make it special when it comes: to hide the budget limitations, the creatures are seen in room corners or obfuscated by flashing lights and cacophonous sound effects.

There are further developments, including bizarre medical conspiracy and a portal into damnation, but they’re doled out amid a tedious scramble around the hospital in which Poole and a group of confusingly impersonal and identical-looking men keep whispering around corners and getting into scraps. By the end, when Poole and Munrow have blown the lid off an eternal-life conspiracy and stand on the brink of another dimension, it’s been a groggy, fitful journey to what’s supposed to be blinding revelation.

You may not only find yourself craving the seedy elegance of Lovecraft or Carpenter, but also the jolting liveliness of Sam Raimi’s Evil Dead.

The graphic design of the poster is more tantalising than the movie it advertises.