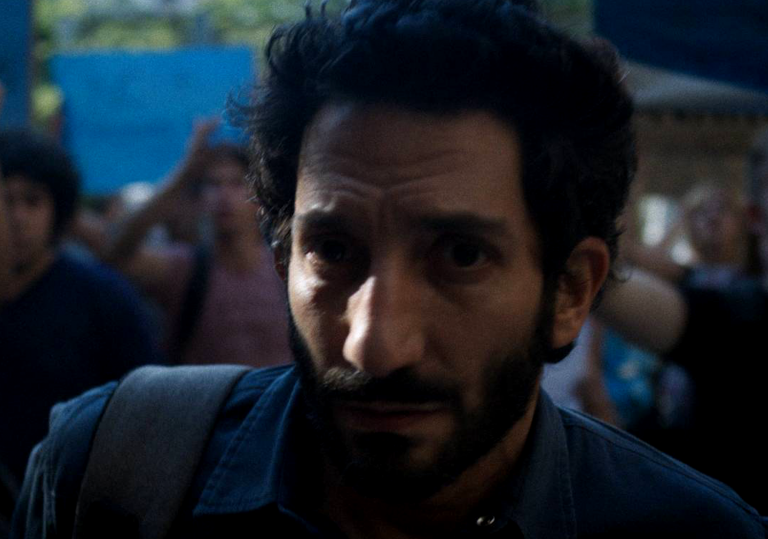 Druglord faces off agains supply teacher – not placing any bets, but I’m on board.

Aesthetically and notionally compelling, but as Marvin Gaye once sang, what’s goin on?

Intriguing, but would work better if the viewer was slightly less confused than Lucio.

A humble school teacher is forced into a stand off against a local drug lord in Diego Lerman's compelling, though overly-contrived drama.

Lucio (Juan Minjín) is unsettled from the off in Diego Lerman’s The Substitute: his new Buenos Aires flat is sparsely furnished; the class he has just become substitute teacher for a class that thinks literature is useless; and his daughter, who he shares custody of due to a fairly amicable divorce, is becoming a teenager too fast. On top of that his father, who is known as The Chilean and seemingly has a finger in every community pie, is sick, and one of his students is involved in some dark drug stuff.

Shots through shower glass and half doorways hint at the fragmented nature of the plot – Wojciech Staron’s stormy cinematography also reflects the layer of middle-aged disillusionment that Lucio views occurrences through. Everything that happens in The Substitute is grounded in empathy built for Lucio– we see predominantly through his kind, watery eyes. Minjín’s performance is subtle and completely believable – ex-novelist Lucio is pragmatic but a bit downtrodden, teaching and therefore unsure if he can do.

He’s a solid addition to the influential educators in cinema canon – he’s not up there with Robin Williams in the Dead Poets Society or Jack Black in School of Rock, but he could possibly hang out with Adrian Brody’s Henry from Detachment. As he attempts to help his student Dilan (Lucas Arrua), who is seriously threatened by a local druglord, Lucio is drawn further into a dangerous world which he is constantly being warned not to stick his nose into.

Simultaneously, he begins to break through the tough, disinterested surface attitude of his students by asking them to tell their own stories – ‘I don’t care about the poem, Prof’ becomes an infrequent response, and they begin to trust him. Through them, Lucio comes to understand more about the dog-eat-dog world which Dilan inhabits.

The atmosphere is smoggy with tension and is built by the competent cast and reinforced by deliberately minimal music and a muted colour scheme. But the richness of the scenes and performances are occasionally undone by the multiple dead ends within the plot. There is, for the most part, constant build up with little catharsis. No one character other than Lucio is given quite enough time to grow, although his interactions with daughter Sol charmingly reveal the frustrations and the tenderness between them.

Lucio’s father’s social role is never fully revealed, and the culmination of Dilan’s arc is clear but unsatisfying. The impression given is that a patchwork of Lucio’s memories are being replayed in a way that is not quite linear and contains little analysis as to their intersections with the film’s themes. Though on one hand it’s a relief to find a film that does not dwell on potent exposition, the lack of follow-up on various storylines makes it difficult to judge the significance of certain events, or the reason for their inclusion.

Druglord faces off agains supply teacher – not placing any bets, but I’m on board.

Aesthetically and notionally compelling, but as Marvin Gaye once sang, what’s goin on?

Intriguing, but would work better if the viewer was slightly less confused than Lucio.