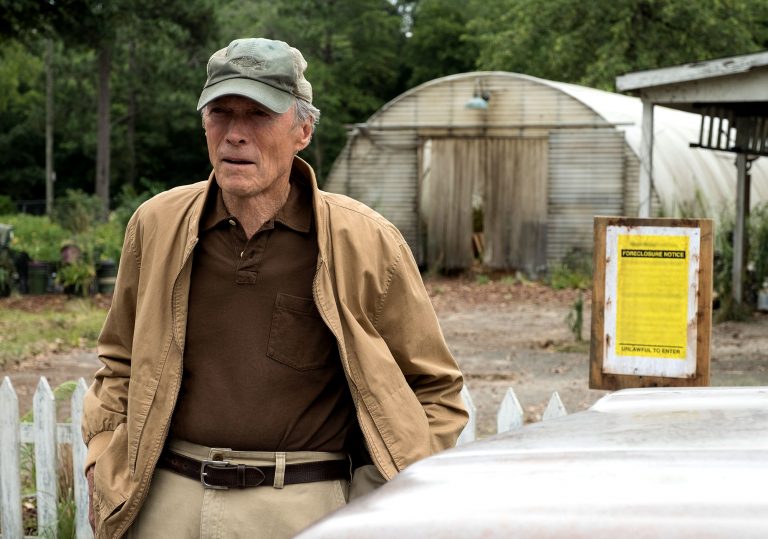 Closer to the bewitching sundowning digressiveness of The 15:17 to Paris than to its own drum-tight trailer.

Clint Eastwood directs and stars in this outstanding American road movie about an ageing drug runner.

In Unforgiven, a weary, weathered Clint Eastwood plays a retired cowboy killer called out for one last ride, and a reckoning with his – that is, his character’s, and his career’s – history of violence. Hailed as an autumnal masterpiece, it was the 16th film the sexagenarian Eastwood had directed in his 21-year career in the chair. In the 26 years since, he’s made 21 more.

That number is up to and including The Mule, which, embellishing a true story of a 90-year-old drug runner for the Sinaloa cartel, sends director and star Eastwood out on an adventure into an even darker twilight, for a final showdown – really, truly this time – with the costs of his own swaggering mythos. Barring an unexpected success for the 118-year-old Eastwood in Dirty Diaper Harry: Did I Take Six Pills or Only Five? (2048), The Mule must surely be his definitive late film.

Film critics might mean any number of things when we talk about “late style”, but one definition that can be reverse-engineering around Eastwood is a set of filmmaking conventions refined to such shorthand you can’t tell if the result is senile or transcendent. Techniques of expedience seem primitive, while techniques of clarity seem passive, and yet the overall gestalt seems ineffably graceful. The Mule is a quavering echo of classical Hollywood filmmaking: old-pro actors get their mouths filled with huge servings of exposition; the music mirrors the characters’ feelings, which are big elemental yearnings; the camera points at the action. One thing happens, and then another thing happens.

This can all feel tin-eared and unsophisticated compared to today’s hyperscrutinised blockbusters, like maybe there’s nobody there behind the camera at all. Where’s Clint wandered off to? Does he not know how constantly you have to work to persuade today’s audiences to suspend their disbelief? These days, too, I’m haunted by the bizarre banality of Eastwood’s aesthetic – his choice of locations and unfussiness with lighting, which, always utilitarian, persists into some of modern America’s ugliest locations: a carpeted flyover-country hotel ballroom; a Waffle House; an interstate highway carving up what was once the West, where an old man in a fisherman’s cap drives a late-model pickup truck with more horsepower than he needs, singing along to oldies radio, off-beat and off-key. I swear, it’s like if the ad agency that came up with the Marlboro Man just kept photographing the same model even after he got diagnosed with lung cancer.

The retro pandering of The Mule is so clunky it’s poignant. Eastwood’s character Earl Stone is, like Gran Torino’s Walt Kowalski, a Korean War vet and codger-camp icon. In the film’s first line of dialogue, Earl roasts a Mexican-American friend with a deportation joke, Eastwood at once baiting some imagined PC-police audience and setting up his character as a man tragically out of time. Earl Stone is a renowned horticulturalist, King of the Day Lilies and the biggest swinging dick at the local flower show. He cracks Viagra jokes in a seersucker suit and tosses back Crown Royals, delighting in his hilariously meagre rewards. 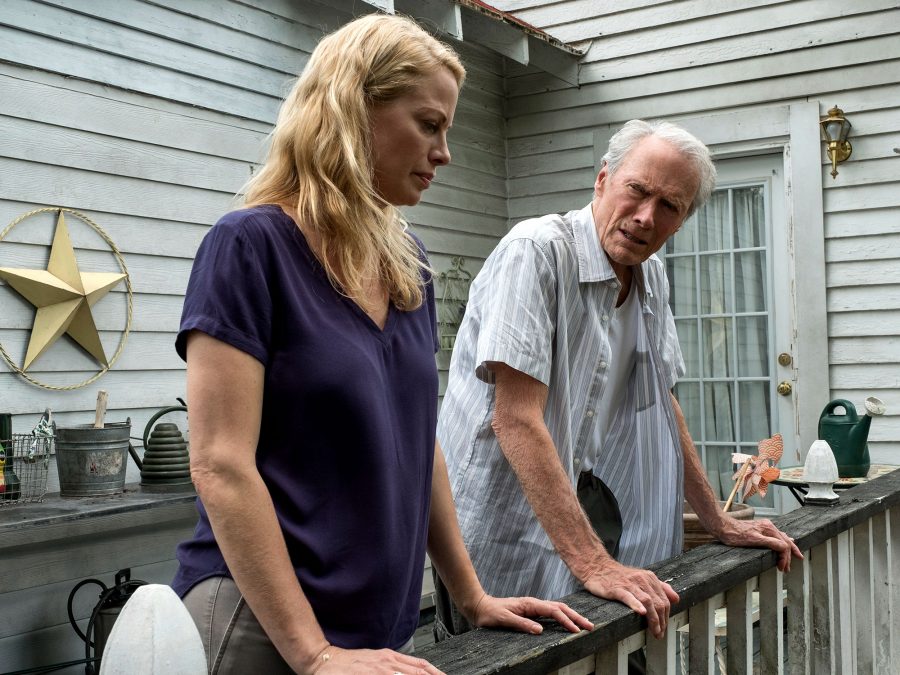 But he’s quickly aged up a decade, into a sketchy outline of orneriness filled in with befuddlement. The “damned internet” has ruined Earl’s business, and he looks shockingly shrunken, with a shuffle in his walk, a tremor in his chicken-bone arms, and a breathy voice rattling out of his flycatching mouth. Stooped and skeletal, he’s barely taller than his granddaughter Ginny (Taissa Farmiga). After a lifetime of living it up on the road and neglecting ex-wife Mary (Dianne Wiest) and daughter Iris (Alison Eastwood), she’s the only family member who still talks to him, and with his house in foreclosure, he allows himself to be recruited by a local cartel affiliate.

He becomes “Tata”, their prized transit man. At first he asks no questions about the assault rifles they carry, the bags they throw into his trunk, or the burner phone he’s instructed to answer (and on which he only gradually and begrudgingly learns how to text). But maybe Earl is slier and less out of it than he appears. Maybe Eastwood is, too.

Despite the ominous trailer, and the presence of Andy Garcia as a politicking drug lord, drippy with gravitas, and Bradley Cooper as a buzzcut, soft-spoken DEA agent, The Mule is largely a laconic road movie, with Earl driving past billboards, mumbling along to ‘Ain’t That a Kick in the Head’, and snacking. Even suspense sequences have the drawling molasses comedy of that other late-life heartland picaresque, The Straight Story, like when he makes up a story about a dog named “Dookie” to get a highway patrolman off his tail. Earl’s doddering is the perfect cover – who’d suspect him? – and the perfect justification, too: surely he’s just a guileless dupe, right?

But it also allows him to get whatever he wants: to play confused in a crisis; to win over his handlers until they raise their hands at his harmless intractability and let him pull over for junk food whenever he wants; to appear fogeyish and good at heart to the strangers he meets, whose approval he needs with a traveling salesman’s desperation. Maybe he’s even fooling himself.

His moral justifications for going out on the road are increasingly flimsy: to raise some money for a local charity; to pay for the open bar at his granddaughter’s wedding; to “be somebody,” to soak up affection from any source, even if it means being a mascot, dancing like a morbid marionette and making heart-attack jokes when attended to by a couple of prostitutes beside a drug lord’s pool. There’s no limit to how pitifully he’s willing to self-deprecate, as long as it means he doesn’t have to go home from the party while other people are still having fun.

Eastwood never appears quite as abject as another vainglorious geriatric drug-runner, Burt Lancaster in Atlantic City, crying out, “I’m a lover!”, but The Mule is quite deliberate in its self-criticism. This is due in equal parts to Nick Schenk’s script and Eastwood’s direction. Earl keeps buying things he doesn’t need, and the camera only seems to notice once another character does. Wiest is the first to notice a gold bracelet on his wrist. A long-lens POV shot when Earl is under surveillance is when the film really registers his appetite for sexual conquest, undiminished by his evident physical and emotional frailty.

Late Eastwood films like Gran Torino or The 15:17 to Paris are tantalisingly ambiguous because the unruffled, creaky filmmaking allows us to see the mustiness of their unquestioned assumptions about masculinity, about violence, about Hollywood’s role in American mythmaking. The Mule, like Unforgiven, sees Eastwood in a more openly wary, introspective mood. While the earlier film second-guessed the genre that made him a star, this one hits closer to the heart, to Eastwood’s own rollercoaster personal life.

And so the old-fashioned sentimentality of the ending – the purity of the lesson that Earl at last learns about humility, love and family, and the broadness of the humour that leavens it. It feels at once fully earned, and deeply suspect. Is this just that irascible Grandpa Clint’s last, most artful dodge? The Mule is a beautiful, troubling film. It is a pearl formed around a grit of unease in the oyster of our nostalgia.

Closer to the bewitching sundowning digressiveness of The 15:17 to Paris than to its own drum-tight trailer.