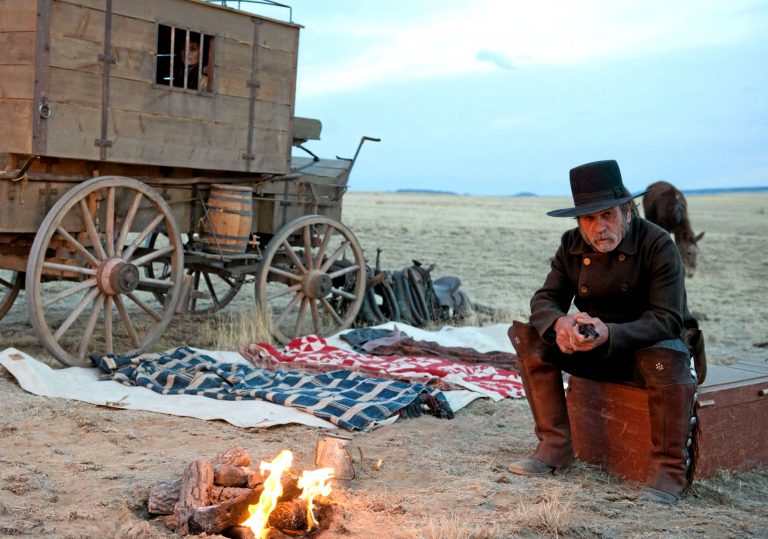 A pleasure to have Jones back in the directorial saddle.

The tonal shifts serve to make the drama more interesting and suspenseful.

Tommy Lee Jones climbs back into the directorial saddle with a beautifully strange feminist western.

She is a lady of good financial standing and moral character. Her strong work ethic doesn’t overshadow her knowing femininity. One day, she would like to start a family, but so far these plans have yet to come to fruition. She is 31 and lives alone. Her name is Mary Bee Cuddy (Hilary Swank), a well-respected woman living in a Nebraska territory named Loup. But in director/star Tommy Lee Jones’ new feature, The Homesman, she is a social failure.

The western genre hasn’t been kind to the finer sex. They’re often the object of affection or the bane of someone’s existence. But in Jones’ film, women are conflicted beings worthy of a more complex consideration. The central narrative follows Mary Bee’s dangerous cross-country quest to transfer three mentally stricken matriarchs across state lines so that they can receive treatment and be free of their fed-up husbands. Using tropes perfected by Anthony Mann in The Naked Spur, Jones litters this road film scenario with multiple divots; directions (physical and psychological) change more than once depending on sudden shifts in character motivation and violent external forces.

Within this context, the female soul is constantly misunderstood, abused and exiled by the surrounding rustic tableaux. Patriarchy isn’t entirely to blame; cowardice is the real root of evil in The Homesman. Sure, most of the film’s characters are aggressive and ignorant men (a species that will never go extinct), but the situation is far more complicated than that. Look at the early scene in which Mary Bee volunteers to accept the cross-country assignment after one of the women’s husbands refuses the job during a town church meeting; every person (man, woman and religious beast) withers when pressed with the responsibility of being her second. Swank’s sad eyes sing a singular requiem of betrayal.

This is why Mary Bee ends up saving an ornery louse named Briggs (Tommy Lee Jones) from the hangman’s noose as a last ditch effort to find some kind of support. Complications arise on their prairie odyssey with the two polar opposite archetypes battling for artistic control of this particular mission. There’s plenty of lively banter between Briggs and Mary Bee, but Jones is far more concerned with intercutting flashback sequences depicting each woman’s descent into madness as the wagon train treks east.

It is here we see the poignant ripples of their past traumas. While Jones’ previous film The Three Burials of Melquiades Estrada focused on the glaringly flawed decisions by stressed blue-collar folk, The Homesman shifts its gaze toward the gravity and consequence of everyday responsibility in the mythical Wild West.

Rodrigo Prieto’s lush and textural visuals make for a perfect compliment to Marco Beltrami’s yearning string score. Striking long shots contain enough of the big sky to imply that heaven is simply but a glance away. But what makes The Homesman a western of great merit and substance isn’t its gorgeous window-dressings or sly subversions in iconography, but the emotional connection it manages to convey through its contemplative treatment of gender, longing and how the two consistently intertwine.

A pleasure to have Jones back in the directorial saddle.

The tonal shifts serve to make the drama more interesting and suspenseful.