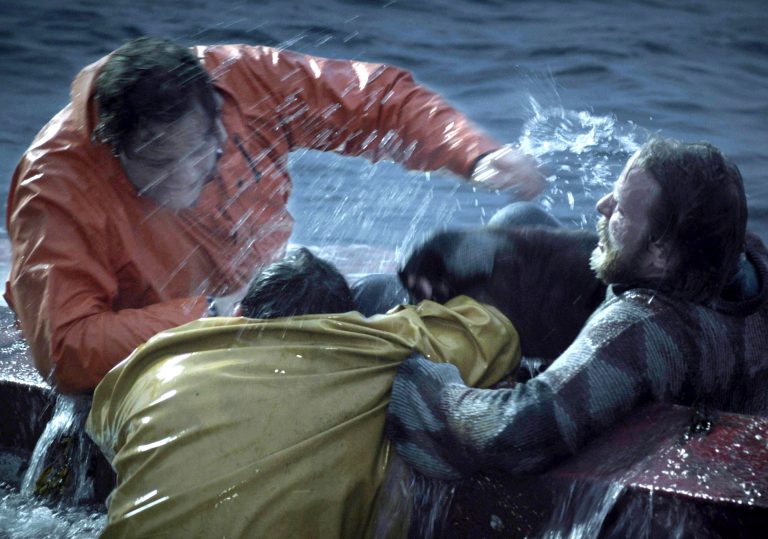 Sounds grim and a little colourless.

The might and splendour of raging elements rolls high, then crash into noise.

Shows pervading and wise humility in the face of nature.

When in 1984 his fishing ship Hellisey VE-503 sank and crewmates died rapidly in the unbearably cold water, Guðlaugur ‘Gulli’ Friðþórsson swam five miles to land, traversed volcanic glass in bare feet then collapsed at the first house he found. His strange victory over the elements puzzles long after the conclusion of Baltasar Kormákur’s striking but cluttered eighth feature, based on this strange real event.

As in Kormákur’s blood-splattered detective yarn, Jar City, the stark climate of Heimaey, an island off the south coast of Iceland, is captured with bleak, almost noirish visuals. The black of the night sea contrasts with snowy landscapes, with grey dominating the establishing scenes as, pre-fishing trip, the crew go drinking on a night that makes Raymond Chandler’s seamy underworld look as vibrant as Spring Breakers.

While his visuals are striking, Kormákur fails to trust in the simple power of his source material, employing various distractions that irritate rather than enhance. His storytelling contains too much padding, music plays during scenes that are strong enough to stand silently and the third-act dialogue, as baffled scientists investigate how Gulli survived, is as clunky as a slapdash TV procedural. Yet — like its hero — the film still manages against the odds to hold the attention.

This is largely because of the lead, Ólafur Darri Ólafsson, who turns in a graceful and economic performance. His Gulli, with stocky frame and fondness for checked shirts, is capable and unfussy, built for a life of small manual successes. When he discovers superhuman survival ability, it sits uncomfortably in his humble self-perception.

His awe is synchronised with the perspective that elevates The Deep above its imperfections. A crane shot of Gulli doggy-paddling through the ocean pulls backwards until he is tiny. This shot is as existentially crystalline as the Auden line: “Looking up at the stars, I know quite well. That, for all they care, I could go to hell.”

Sounds grim and a little colourless.

The might and splendour of raging elements rolls high, then crash into noise.

Shows pervading and wise humility in the face of nature.