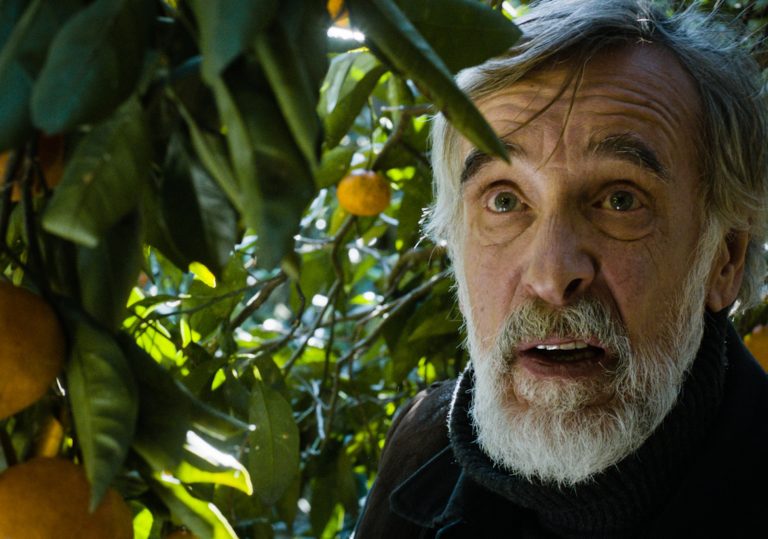 War films, what are they good for?

The funniest and most profound film about war since Dr Strangelove.

Georgian writer/director Zaza Urushadze generates laughs from absurd situational humour. Except the situation he has contrived is only absurd because we have grown to accept that warring nations dehumanise each other. The sight of two grizzled enemy soldiers sipping soup at the same table, rendered incapable of hurting each other by respect for the house rules of their host, is really a sensible riposte to the moral chaos of war.

Holding the premise of the film on his shoulders is seasoned Estonian actor, Lembit Ulfsak. It is 1990 and war has broken out between the Chechens, who want independence, and the Georgians. Ulfsak plays Ivo, a Michael Haneke look-a-like whose family have fled the region. He has stayed behind in Georgia to harvest a final, and quite clearly splendid tangerine crop with his downbeat pal Margus (Elmo Nüganen).

The film begins with the sight of him sawing a crate into existence. Two gun-toting Muslim Chechen soldiers come a’knocking. They want food. This rangy and po-faced old man goes about providing them with sustenance while the soldiers exert their swagger causing you to wonder what type of war film this is going to be. Will these soldiers rob this obliging, grandfatherly figure of his dignity showing cinema-goers – for the zillionth time – that nothing is sacred in wartime?

But then Ivo snaps at the soldiers for ogling a picture of his granddaughter. They respect his courage and suddenly a different family dynamic is in the mix – one that grows in magnitude as the juice of the film is squeezed out. There is a shoot-out between Chechens and Georgians. Ivo ends up taking the last men alive from both camps into his house to convalesce. Ivo’s paternal strictness and idealism keeps their mutually murderous instincts in check. He has saved them both and so they must learn to get along, at least while under his roof. Cue a slew of domestic scenes that are as tense as they are charming as they are entertaining.

The success of this film depends upon performances that are absolutely sincere. No one is arch or glib or milking comic potential. The Chechen, Ahmed (Giorgi Nakahshidze) clearly wants to gun down or stab the more seriously wounded Georgian, Niko (Mikheil Meskhi). Niko looks at and talks to Ahmed with poisonous contempt. Both actors resemble weathered men with faces and attitudes pushed into hard shapes by conflict. Then there is Ulfsak as Ivo. Whether heating tea on the stove, sprinkling herbs on soup or insisting on moral treatment in short referee barks, he is magnetic with a naturalism that seems to suggest that the camera is just another guest that has stumbled into his home and therefore qualified for unwavering hospitality.

Urushadze reels the high, impersonal stakes of war into concentrated domestic scenes that take place under this one roof. As events play out there is both the intimate meaning that has come to exist between characters and the symbolic meaning which is hugely moving.

War films, what are they good for?

The funniest and most profound film about war since Dr Strangelove.