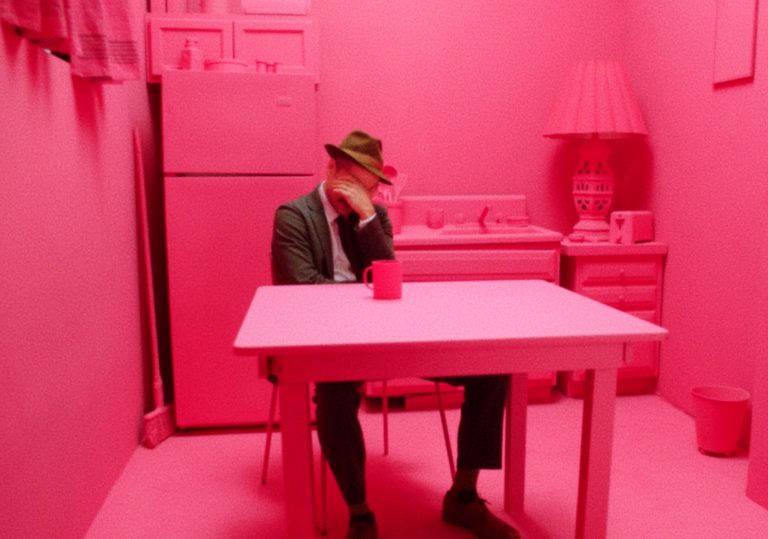 A retro take on the world of tomorrow.

More than the sum of its deadpan quirks.

A dream auditor becomes caught up with an ageing eccentric in Kentucker Audley and Albert Birney's highly imaginative feature.

If the future’s going to be a dystopia, it won’t be all doom and gloom — barring some major alteration in the laws of nature, for instance, the standard forecast of rain and dour cloud cover would have to be broken up by the occasional bout of sunshine. In Strawberry Mansion, an offbeat-to-the-point-of-unclassifiable new film from Kentucker Audley and Albert Birney, the joint writer-directors eschew apocalyptic extremes in either direction. Neither wasteland nor rictus-smiled compulsory paradise, their take on the shape of things to come instead opts for a lo-fi, low-key mode not so far removed from the present.

In the film’s vision of 2035, the everyday bleakness will be plausible in concept yet fanciful in execution, a wearied normalcy accented with pops of surrealism. That’s the closest a critic can come to pinning down the odd stew of atmosphere into which James Preble (Audley) wanders, a pocket of the bizarre combining straight-faced banality with the illogic of dreams. He’s an IRS auditor by trade, having traveled to the idyllic pocket of woods — shot on location in Maryland, though the title refers to a neighborhood and historical site in Philadelphia — occupied by the wizened artist Arabella (gem of the stage Penny Fuller) to collect what she owes.

In a dimension that indulges its arts-and-crafts eccentricities while stopping just short of Miranda July-level preciousness, our dreams have become subject to government taxation, and Arabella’s been using a self-devised helmet to circumvent these payments. With equipment that likewise looks like it’s been nicked from a Soviet space station, James enters her slumber as a hologram to take stock of what she’s skimped, eventually falling for the youthful mental image of Bella (Grace Glowicki) that he meets there.

The final act’s reality-bending romance might gesture toward Eternal Sunshine of the Spotless Mind, and the daffy whimsy in the imagined sequences certainly owes a debt to Michel Gondry. But Audley and Birney have their own notions about the sinister creeping of commercialism, which forms the core of its anxiety about what lies ahead. In James’ personal dreams, an irritating man (experimental theatre stalwart Linas Phillips) barks advertisements for toxic, synthetic products like soda pop and spider-killer spray.

Though he’s an agent of the state, he’ll grow weary of the soul-deadening regime he enforces upon seeing the possibility of a beautiful alternative, embodied by the DIY spirit of this wholly independent operation. The directorial duo backs up the script’s emphasis on purity by applying it to their homemade methods, from the papier-mache frog head reminiscent of the waiter from The Forbidden Zone to the scavenged dollhouse used as a practical effect for a jerry-rigged establishing shot. Transferring their digital footage to 16mm film after the fact gives a warm, earthy texture to the oft-freaky production design, reminding us of the human touch in a room seemingly slathered in Pepto-Bismol.

Though the sense of humor at play relies on the anti-comedy of nauseating repetition both too heavily and not heavily enough — you either go the Tim and Eric route or you don’t — it’s bonded to a winning earnestness that brings clarity to the strokes of Dada. This isn’t weirdness for its own sake, the tangents on the high seas or a deserted tropical island guided by a childlike yen for adventure. In rejecting the crass compromises of a capitalism-yoked world for an unspoiled oasis of the mind, the film returns to the innocence of infancy adults only re-experience in slumber, all tangled-up confusion and fear and wonder. In a time benumbed by the imperative to buy useless shit, feeling anything counts as a victory.

A retro take on the world of tomorrow.

More than the sum of its deadpan quirks.