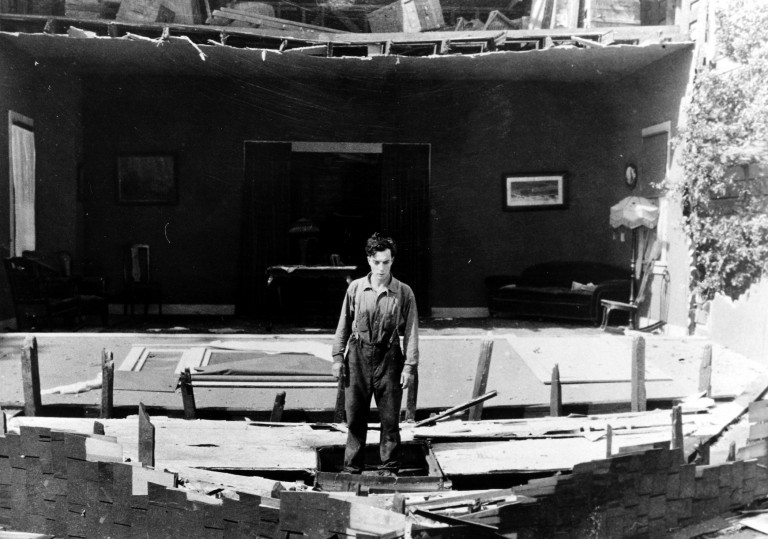 Buster Keaton restored and back on the big screen is always welcome.

A master on prime form, and the accompanying short The Playhouse is ingenious too.

Keaton has lost none of his ability to entertain and astonish.

Don’t miss this chance to witness Buster Keaton work his extraordinary magic on the big screen.

The cameras were ready to roll, but most of the crew couldn’t bear to watch. Buster Keaton stepped onto his mark and waited for the wall of the house behind him to fall. If his measurements were correct – and they usually were – a window should land exactly where he stood, leaving him unscathed amid the wreckage. He had just two inches of clearance for his head and shoulders and the slightest miscalculation would be fatal, but Keaton later recalled feeling that he didn’t really care if the house hit him or not. The day before they filmed this stunt he had received the news that his independent studio was to be shut down and, against the advice of Charlie Chaplin and Harold Lloyd, he was about to sign a contract with MGM.

Keaton would make one more film that was recognisably his at MGM – the intermittently brilliant The Cameraman – before the studio began exerting full control over his projects, but if Steamboat Bill, Jr was to mark the end of an era, at least Keaton ensured he went out with a bang. The climactic storm that destroys the town and very nearly destroys our hero is one of the most ambitiously conceived and brilliantly sustained comic set-pieces in cinema, with Keatonʼs jaw-dropping athleticism and endurance frequently being put to the test as he is buffeted by gale-force winds and sent hurtling down debris-strewn streets. Keaton had originally intended to end his film with a flood before a real-life disaster forced him to opt for a hurricane, “as a more restful type of calamity to watch,” but there’s nothing restful about the spectacle he puts on screen.

Steamboat Bill, Jr has sometimes been spoken of as a second-tier Keaton, justly celebrated for the climax but rarely discussed in glowing terms elsewhere or classed alongside acknowledged masterpieces such as The General or Sherlock, Jr. In fact, the full range of his brilliance is on display in this film, with the smallest and most keenly observed details often leading to the most cherishable moments. Has any screen actor ever been more expressive in their stillness? The scene in which Keaton’s foppish city boy is ordered by his tough father to replace his beret with a proper working man’s hat is one of the funniest he ever filmed, and all it consists of is him facing the camera while trying on an eclectic range of headwear and reacting in his typically understated fashion. It’s a masterclass in comic timing and deadpan reaction shots, and a reminder that Keaton had few peers when it came to communicating with his eyes and the smallest of gestures.

Keaton’s whole body was an extraordinary machine and the film has him running for his life and bouncing back from violent pratfalls throughout. To watch this film is to watch a man repeatedly throw himself into peril for the sake of comedy cinema, and perhaps there’s an increased sense of urgency to this performance with the knowledge that he would never enjoy such freedom again. In the chaos of that astonishing storm, Steamboat Bill, Jr provides us with one of the defining images of this great star – a diminutive man poised at a 45 degree angle, bravely facing into the fierce winds, and determined to stay standing even as his whole world collapses around him.

Buster Keaton restored and back on the big screen is always welcome.

A master on prime form, and the accompanying short The Playhouse is ingenious too.

Keaton has lost none of his ability to entertain and astonish.