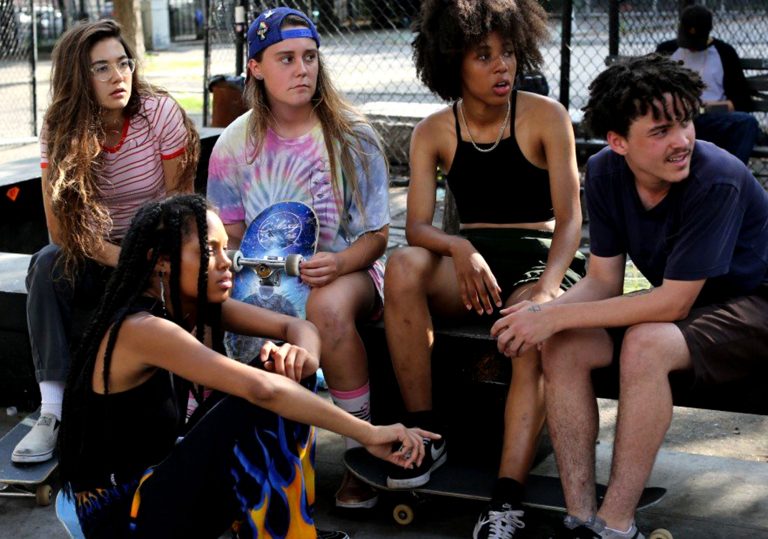 Skating in the kitchen? Cooking in the skatepark?

Pot, periods and kickflips brought to life with a dreamy aesthetic.

A mobilising portrait of sisterhood and skate culture.

Support, power and the natural turbulence of sisterhood shine through in Crystal Moselle’s Skate Kitchen, a film about female friendship which rejects the sideshow baggage of toxicity and hatred. This sun-warmed coming-of-ager introduces Rachelle Vinberg as Camille, a lonely teen who just wants to skate. She struggles to forge a connection with her peers in the Long Island suburb she calls home, and so escapes to New York City to find an Instagram-famous female skate collective: The Skate Kitchen.

The film is based on Moselle’s 2016 short That One Day, which features much of the same cast. Real members of The Skate Kitchen play thinly disguised versions of themselves: they wear their own clothes (bejewelled with unique New York style); they skate on their home turf; and much of the film recreates their lived experience. The years of chemistry between the crew and their familiarity with skater slang adds authenticity to the film’s dialogue, coming to them as naturally as an ollie.

This relatability also extends to the simple plot, which is told in drags during afternoons at the skatepark and subway rides spent damning the patriarchy. Its measured pace feels true to life; Camille’s relationship with her protective mother ebbs and flows, and romances aren’t always what they seem. Friendship fallouts are revelatory life events for Camille to whom these girls become family. At points this lack of drama makes investment in the characters a little tough, in spite of their individual vibrancy.

Regardless, the plot plays second fiddle to an atmosphere of nostalgia. So essential to skating is the feeling, the freedom, the flying – all shared with your tube-socked, tie-dyed posse. Moselle reproduces this with mellow tones and ambient sounds. The slow motion shots of hedonistic parties and mesmerising skate sequences capture the idea that skating is a lifestyle for these characters – it doesn’t end when they step off a board.

Skating in the kitchen? Cooking in the skatepark?

Pot, periods and kickflips brought to life with a dreamy aesthetic.

A mobilising portrait of sisterhood and skate culture.