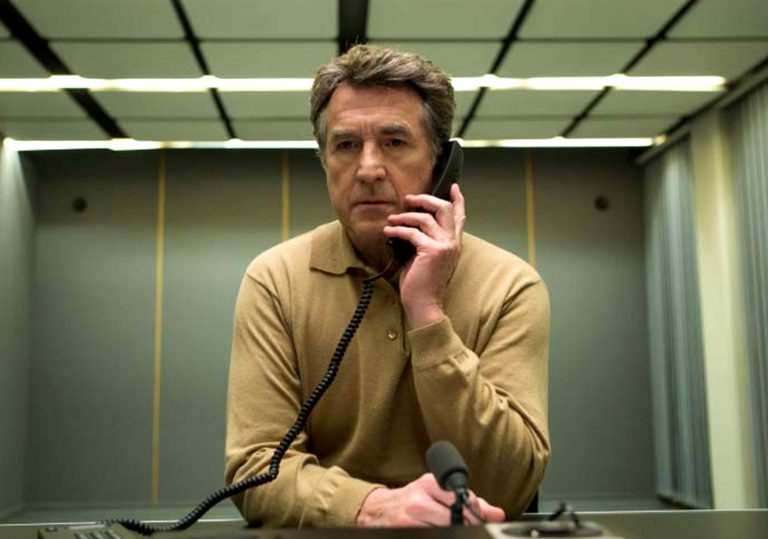 A lesser film than the American classics it pays homage to.

Very little is memorable outside of the cinematography and sound design.

If you didn’t know that this feature debut from director Thomas Kruitof’s came out in 2017, you might think that it had originally hit cinema screens in the late ’90s. Full of straight-faced suspicion, suspense and a whole lot of grey, Scribe is a film that buckles under their weight of its American thriller inspirations. It boasts a shallow storyline which hides behind large-scale political themes and also hinders the central drama, making even this relatively curt runtime feel like a drag.

We follow the mild-mannered, ex-alcoholic office clerk, Duval (François Cluzet), whose current unemployment finds him in a shady job transcribing taped phone calls for a mysterious figure known only as Clément (Denis Podalydès). Crucial plot points emanate through muffled voice recordings on cassette tapes, and our imagination is allowed to run away from us. Tension turns to dread as we join him as he plunges down the rabbit hole.

The use of more primitive technology such as a typewriter and a cassette player gifts the film with cool retro visuals. Clément uses the excuse that contemporary electronics are too easily infiltrated, which is a nice cover. Regrettably, however, the beautiful cinematography and sound design enabled by these analogue machines is not employed anywhere else in the film. This makes the sudden attention to detail feel like a glaring aside, and highlights the fact that this is a cosmetic visual strategy, and nothing more.

Cluzet’s performance stands out as he projects Duval’s gradual neurosis and emphasises the gravity of the situation through expression alone. One scene in particular sees the recluse unwillingly participate in actions that leave him visibly shaken. This only lasts so long, however, as his sudden character change in the third act feel more artificial than natural.

Similarly, a subplot involving Duval and fellow AA member, Sara (Alba Rohrwacher), appears contrived: their quasi-parental/romantic relationship establishes an unnatural passage to the sadly underwhelming finale. There are positives within Scribe’s structure, but it is much more memorable for its aesthetics than any narrative or emotional substance. Still, as a debut feature it definitely demonstrates potential.

A lesser film than the American classics it pays homage to.

Very little is memorable outside of the cinematography and sound design.