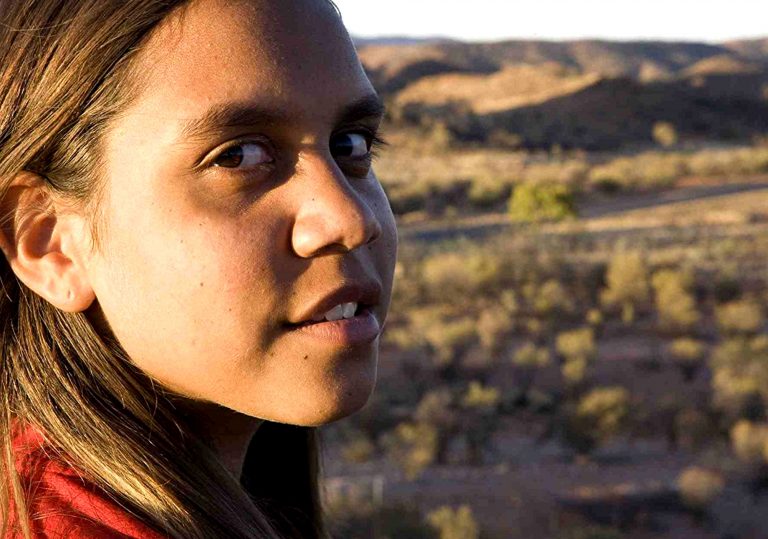 Gritty and gruelling but also profound and beautiful.

A milestone achievement from Warwick Thornton.

Filming in the sparse ochre surroundings of Alice Springs, Warwick Thornton guides us through the gradual disintegration of two local teenagers as they slip through the cracks of contemporary Australia in this dust-choked anti-ode to the aboriginal experience.

Samson (Rowan McNamara) and Delilah (Marissa Gibson) are two lost souls barely existing in an isolated community in central Australia. Where Delilah finds solace in caring for her grandmother, a traditional artist ruthlessly exploited by white opportunists, Samson buries himself in petrol fumes and his quiet, distant love. But when Delilah’s grandmother dies, the two seize their chance to escape to the city, only for matters to take several turns for the worse.

Both McNamara and Gibson are non-professionals chosen for their intimate understanding of the drama. Representing the shattered dreams and broken promises of an entire generation, their physical and emotional suffering evokes an enormous pathos. Dialogue is kept to the barest minimum, and though neither actor could be described as particularly expressive, their gradual withdrawal into themselves and away from each other is beautifully conducted.

Though the character arc recalls Darren Aronofsky’s Requiem for a Dream, Samson and Delilah isn’t all gritty realism. A former cinematographer, Thornton injects a gruff lyricism into the film, capturing the supple spectrum of light and heat that spits and sizzles in the frying pan of the Australian Outback. He creates a sense of hypnotic enervation that perfectly captures the exhausted despondency of two teenagers whose lives are dwindling into non-existence.

Thornton’s command of space, location and mood is exemplary, recalling the Taiwanese master Tsai-ming Liang in the way this love story plays out in the interstitial spaces of the city. Wreathed in profound silence, we hear nothing but learn everything about these two young people.

After a cavalcade of misfortune – much of which is genuinely difficult to watch, and impossible to reconcile yourself to – the film’s ending may strike some as insincere. But in coming full circle and returning to the barren beauty of Alice Springs, Thornton deftly invests the routines and traditions of the local community with an almost mythological significance. Meaning may be a devalued currency in the lives of these kids, but it briefly glitters like gold.

Gritty and gruelling but also profound and beautiful.

A milestone achievement from Warwick Thornton.