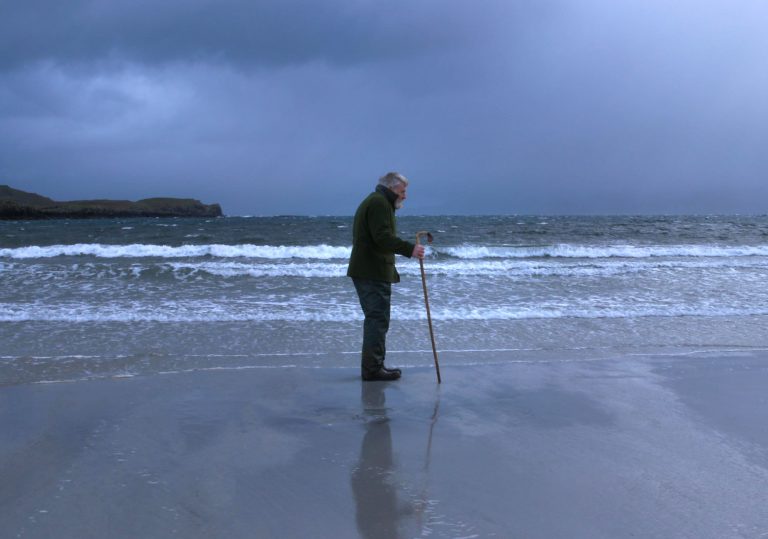 Documenting a modern island laird is an intriguing premise

Jansen brings out the best in her tricky protagonist.

Although light on tension, this is an accomplished and atmospheric portrait of island life.

Cindy Jansen’s intriguing documentary chronicles one man’s life on one of Scotland’s most remote islands.

On a remote island in western Scottish, an elderly patriarch works the land. Back bent and head bowed, the man shuffles across the farmyard. He sweeps out the sheds, milks his doting cows and carries heavy pails across empty fields. “This is what I call heritage farming,” the man, Lawrence McEwan, explains to the camera operator. “When I’m gone I don’t think anybody will be willing to do this.”

In his yellow wellies and navy fleece, Lawrence doesn’t cut much of a stately figure – but he is, in fact, Laird of the Isle of Muck. Passed down from McEwan to McEwan, Lawrence inherited the island from his father in the 1960s, advocating for an ethical and eco-conscious approach to land ownership. Archive news footage depicts Lawrence as an enthusiastic young man, rallying for a sense of communal spirit on the island. Now, aged 80, Lawrence struggles to retain control of his stewardship as younger family members push for a more modern style of farming.

Prince of Muck is Cindy Jansen’s first feature documentary and, while Lawrence is her film’s subject, the island is her main character. Long shots of stormy skies, choppy waters and rough cliff edges haunt Lawrence’s quiet, seemingly quaint, lifestyle. Jansen’s camera drinks in its fill of cloudy greys and murky blues as Lawrence meanders down the beach, cows in tow.

The Dutch director films her subjects with cool detachment and, although Lawrence occasionally breaks the fourth wall, for the most part the film stays at arm’s length, observing the island’s small community from the perspective of an outsider. When the film moves inside the farmhouse, we listen in as Jenny, Lawrence’s despairing wife, urges him to retire and allow someone else to take his place as steward of the land. Lawrence, however, can’t bear the thought of Muck losing the McEwans and the McEwans losing Muck.

Lawrence is a difficult protagonist. When confronted by family members about the future of the island, he remains in stubborn silence and prefers to express himself through old diary entries and poetry narrated in voice-over. Jansen casts Lawrence’s complexities in an affectionate light and glimpses of a younger, more carefree man shine through in her use of archive footage.

“You mustn’t get too sympathetic,” chides Lawrence about his animals. Jansen takes a similar artistic approach, refusing to fall into the easy trap of romanticising the McEwans’ island lifestyle. This is a land of farmers, fishermen and sailors, and Jansen paints a delicate portrait of the island’s ecosystem of labour which is beginning to fray as the younger generation leaves for the mainland. David McAuley’s score is subtly affecting, adding just the right amount of melancholy to the documentary.

Jansen prods at her film’s themes of labour, land and love perhaps a little too lightly, but Prince of Muck is an artfully crafted portrait of an island and a family in transition.

Documenting a modern island laird is an intriguing premise

Jansen brings out the best in her tricky protagonist.

Although light on tension, this is an accomplished and atmospheric portrait of island life.