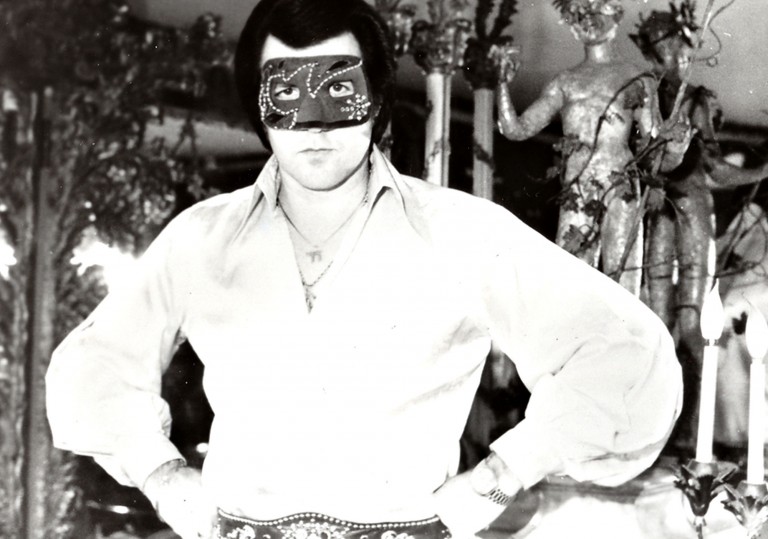 Intentionally and richly impossible to grasp.

Shades of Carol Morley’s Dreams of a Life-upon-Nashville.

Elusive and haunting are descriptions that fit this documentary and its subject. Jimmy Ellis – the singer who sounded exactly like Elvis and never stepped out of his vocalganger’s shadow – isn’t here any more. His life is recounted in stages. Talking heads, footage of gaudily dressed, charismatic performances, his son’s memories and recordings of his own musings are organised thematically. The effect is of peeling back the layers of an onion. But instead of a core, there are still more layers.

Jeanie Finlay’s investigative documentary is many things, but it is not an exposé. So, what is it? A eulogy for a man who wanted to be more than a bizarre footnote in the history of Elvis impersonators? Or a eulogy for a man with a sorrowful beginning and an even more sorrowful end, who filled the interim years with his twin passions: music and women? The Ellis in old recordings has an easy charm that thrives even though he is always wearing spangly masks that evoke a disco-loving highwayman. These masks were the consequence of a too trusting deal with an exploitative music industry shark.

After The King’s death, Ellis was relaunched as Orion, by a management intent on capitalising on the Elvis lives myth. He was contractually obliged to wear a mask. Like a glitzy leash, the masks are a permanent reminder that Ellis is not his own man. At the peak of his powers, no one knew his face. Finlay lets this bizarre reality and the infinite symbolic interpretations pulse beneath all the euphoric archive performances. There is a shaggy dog quality to the way that Ellis’ life is presented because this is the story of a man that didn’t quite make it. The story of the man who would be king is the story of lives that meander, not ending in glory, just ending.

Intentionally and richly impossible to grasp.

Shades of Carol Morley’s Dreams of a Life-upon-Nashville.