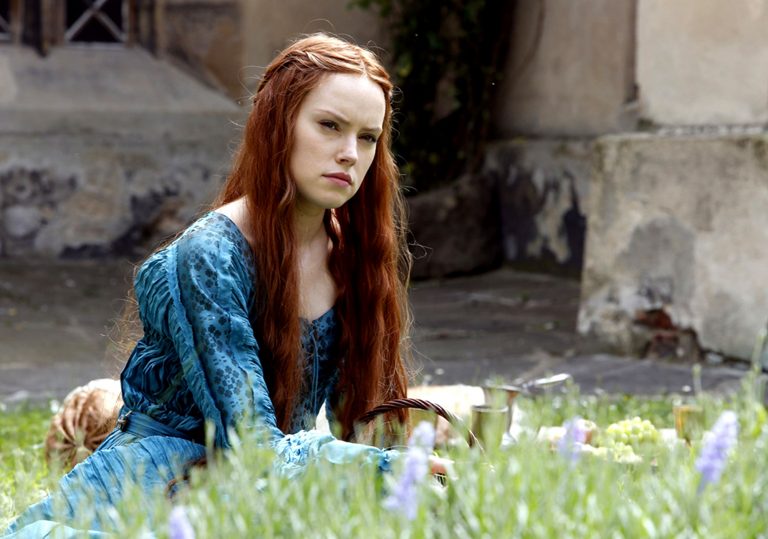 This film supports Shakespeare’s choice to focus on Hamlet.

It cannot be stated enough how terrible the wigs are in Ophelia – a feminist take on ‘Hamlet’ in which Shakespeare himself is missing in action. Director Claire McCarthy and writer Semi Chellas have taken the female character with possibly the least agency in any of Shakespeare’s work, put her in an awful wig, and given her full control over her destiny.

The mission to transform this play into a modern progressive statement (which, strangely, only draws on scant elements of the original text) is evident from the off. “It’s high time I should tell you my story myself,” Ophelia (Daisy Ridley) declares in voiceover while drowning in a river, alluding to John Everett Millais’ famous painting.

Their close relationship quickly and abruptly changes when the Queen learns that her son Hamlet (George MacKey) has fallen in love with Ophelia. Once the King dies at the hand of his mischievous brother Claudius (Clive Owen), Hamlet returns to avenge his father and punish his mother at the expense of his ‘true love’.

Despite attempts to hammer it home, McCarthy struggles to establish a feminist standpoint through the female characters and their relationships to one another, as well as with the men. Gertrude is portrayed as a shallow, cruel wife whose unmet needs lead her to plot her husband’s murder. All of the other ladies in waiting are mean and spiteful. Even Mechtild is depicted as a weak woman hiding from the world because she lost the only thing that a woman can possibly want or need in life – her unborn child.

Ophelia, meanwhile, is confused and consumed by her infantile love for Hamlet. She rejects his advances at first, then falls for him, wants to die when she thinks him dead then ends it with a ‘farewell’ when he faces the possibility of real death.

Ridley brings the same sincerity and ferocity to Ophelia that she does to Rey in Star Wars, and Watts delivers a credible performance that revolves around vanity and midlife crisis. MacKay manages to convince that he is either in love or mad, at times both. However, the story and performances are repeatedly undermined by McCarthy’s decision to focus on the grandiose (but often dull) settings, in many instances purely for aesthetic gains.

The bold cinematography doesn’t compensate for the lack of a consistent tone and style. Ridley looks like a goddess most of the time, but the over-the-top costumes make this film feel like a silly fairy tale rather than a serious tragedy. Having made the decision to abandon Shakespeare’s language – perhaps considered too sophisticated for the young target audience? – the result is a confused melodrama more fitting for a retelling of Twilight in the woods than of the greatest play ever written.

This film supports Shakespeare’s choice to focus on Hamlet.