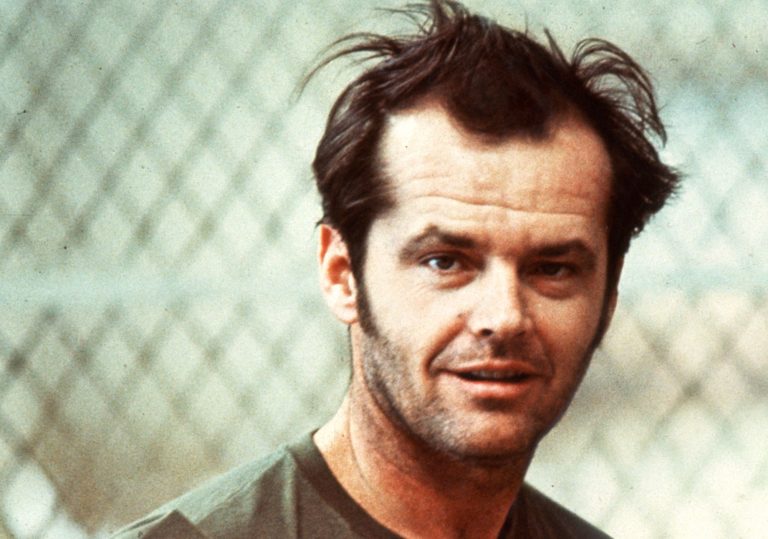 One of the great American films of the 1970s.

A dark vision of the American psychiatric system which incorporates a tragic seam of comedy.

Nicholson is simply unsurpassable in one of his most iconic roles.

Let’s be completely honest, One Flew Over the Cuckoo’s Nest is a great movie. Jack Nicholson, as the dangerously charismatic Randle McMurphy, is just one of the many components that makes this time-honoured work so remarkable. The BFI are re-releasing the film to coincide with Nicholson’s 80th birthday, which is the perfect excuse to state once more why it remains a classic.

McMurphy is a cunning and eccentric chancer whose impulsive antics shape the film. It opens on him being moved from prison to a mental asylum believing that he’s beaten the system, but the progress of his character (and the realisation of his dire situation) mirrors the story’s slow descent into the abyss.

The initial excitement of having his handcuffs removed is abruptly replaced by a need to escape when he learns his stay in the hospital may be indefinite. He hatches a clever, simple plan to escape. Director Milos Forman employs long, lingering shots to highlight Nicholson’s moments of deep thought. These offer contrast to earlier shots of the prankster king and usher in a feeling of deep disconcertment. It starts as a comedy and ends as a tragedy.

Ken Kesey’s 1962 novel was initially adapted into a stage show which ran from 1963 till 1964. Having been cast in the role of McMurphy in the Broadway version, actor Kirk Douglas then purchased the film rights. But after waiting over a decade for the green-light, Douglas handed the rights over to his son, Michael. By this time Kirk was 60 and too old to return to the lead role, leaving it wide open for the then 38-year-old Nicholson. Danny DeVito reprises his debut role as the delusional Martini, one of McMurphy’s associates. The film went on to win six Golden Globes, six BAFTAs and five Oscars, including Best Actor, Best Director and Best Actress for Louise Fletcher.

Throughout the film McMurphy encourages trouble in the ward, yet these humorous and dramatic schemes ultimately result in ever more severe treatments, and he is eventually forced to endure shock therapy. This particular punishment is the result of McMurphy attempting to protect fellow inmate Charlie Cheswick (Sydney Lassick) after he becomes aggravated when Nurse Ratched (Fletcher) refuses him a pack of cigarettes. Although McMurphy is back on his feet in the following scene, he subsequently spends more time staring off into the middle distance and thinking deeply about his life (or lack thereof).

The way in which Forman frames the reasons for and consequences of using shock therapy makes us question whether it is in fact a viable course of medication, or merely just a form of physical and psychological torture. It’s also worth noting that the film is directed by a Czechoslovakian expat, making it more than just a specific exposé into the workings of the American psychiatric system of the time.

It’s said that Louise Fletcher distorted Forman’s initial image of the film’s antagonist, Nurse Ratched. The director has explained that Fletcher was initially a bad fit for the character, and so he changed the character in order to make her wickedness more subliminal. As opposed to being so openly and obviously evil, Forman thought it would work much better if she were more resigned and manipulative. This is one of the key reasons why the film has endured.

Many of the extras who feature in the film were in fact real patients. This allowed the cast to get to grips with the true nature of mental illness. However, some of the disabilities assigned to the characters – for example Billy Bibbet’s stammer – provoke the question of whether these men were typically considered ‘dangerous’ within the historical context, or whether they were in fact just non-conformists. In this sense, the film can be seen as a metaphor for the rise of the counter-culture movement in America and the heavy-handed tactics used to keep these rogue elements in check.

As the film comes to its bittersweet close, we see McMurphy sneak alcohol, cigarettes and women into the ward in order to have a small ‘goodbye’ party. He plans to escape with the monosyllabic “Chief” (Will Sampson) the following morning. But after being caught with said contraband, the consequences are devastating for everyone concerned. Further necessary punishment takes its final toll on McMurphy, whose devastating transition renders the question of his sanity moot.

Forman’s meticulous depiction of the American psychiatric system creates a unique ambiance (and ambivalence) throughout the film. At the same time, the immaculate direction brings delicate ideas, issues and moral quandaries to the fore. Was McMurphy sane? We’ll never know.

One of the great American films of the 1970s.

A dark vision of the American psychiatric system which incorporates a tragic seam of comedy.

Nicholson is simply unsurpassable in one of his most iconic roles.