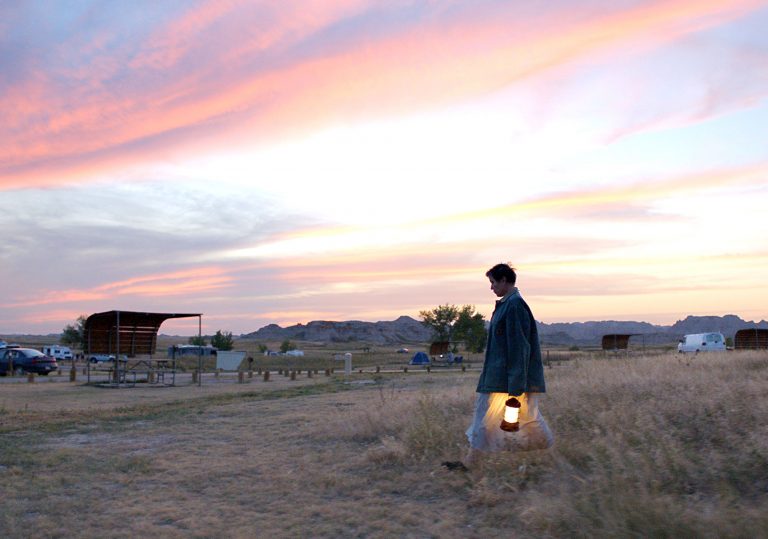 Zhao’s filmography is two for two so far. Let’s see how this one goes.

Make that three; Zhao is one of our brightest hopes for cinema’s future.

A devastating – but hopeful – portrait of modern America.

At the start of Chloé Zhao’s Nomadland, a title card informs us that in 2011, after 88 years of operation, the United States Gypsum Corporation closed its plant in the small town of Empire, Nevada. The residents had to vacate their homes, which were owned by the company. It effectively became a ghost town. Drawing on the experiences detailed in Jessica Bruder’s 2017 non-fiction book of the same name, Zhao chronicles a year in the life of one woman forced out of Empire as she seeks work across the United States.

The van in which Fern (Frances McDormand) lives is her refuge. Giving a friend a tour, she proudly explains how she’s modified it to provide more storage space, including using part of her late husband’s fishing box as a cupboard door which drops down to provide an extra kitchen counter. The loss of her spouse looms large for Fern, and the first time we see her, rummaging through her storage container, she comes across a work shirt of his and pauses, visibly upset, before she hugs it close to her chest.

But there’s no time to grieve in corporate America, and Fern hustles from job to job, pinballing from Christmas work at an Amazon distribution centre in Nevada to campground employment in the Badlands National Park and, later on, employment at the historic Wall Drug near Mount Rushmore.

She finds friends in a like-minded community who meet up in Arizona – all older Americans, living in their vehicles and formalising the nomad culture through fairs and gatherings. Some do it because they love the freedom it offers, others for financial reasons, but all share an understanding that the government isn’t going to provide for them, so they have to look after one another. 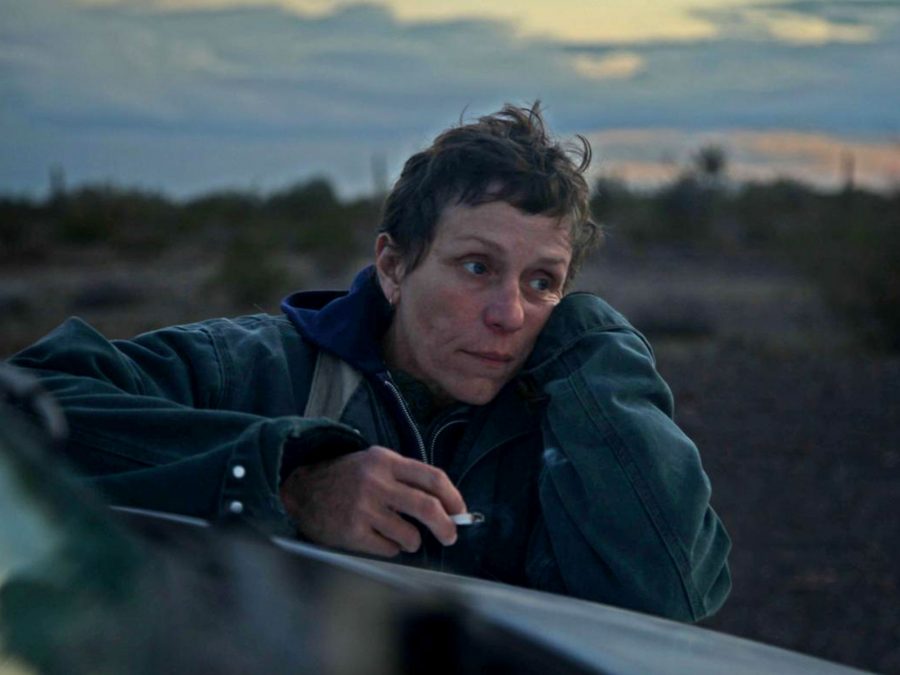 Alongside the real-life nomads who play her friends and colleagues, McDormand slips in seamlessly. Fern is a stoic, resourceful protagonist, but not without vulnerability, which we glimpse in breathtaking moments where she allows herself to let her guard down. We see Fern when she’s sick, Fern when she’s upset, Fern when she’s happy – and McDormand proves there is no end to her talent or versatility. It’s an understated performance of the utmost tenderness. Her co-stars are equally valuable, and Zhao’s gift as a storyteller is rooted in how deeply she makes us care for each and every character she places in the frame.

Despite the backdrop of financial uncertainty and the ruins of the American Dream promised – then reneged upon – to countless generations of blue-collar workers, Nomadland is a compassionate, people-focused story. Yet its political implications are fascinating and will undoubtedly spark conversations; it’s interesting to note, for example, that the town of Empire sits on the edge of the Black Rock Desert, most famous for the annual Burning Man Festival; formerly a celebration of counterculture, now a place for celebrities such as Paris Hilton and Heidi Klum to be seen prancing around in their finery.

Similarly, seeing Fern staring up at the colossal corporate facade of Amazon – owned by the richest man in the world – stings. The sad fact is, the people with the true power to change the world for the better aren’t interested in doing anything of the sort.

But Zhao doesn’t appear interested in creating didactic art which tells us how to feel or what to believe. In her previous two films, Songs My Brothers Taught Me and The Rider, she explores trauma and recovery, plus the burning desire to escape unfortunate circumstances. Nomadland feels like a continuation of these interests. All three of her feature films feel so open to interpretation, but also encourage the viewer to consider the relationship between humans and nature, and to bask in the great untouched beauty that still remains beyond the imposing cityscapes of modern America.

Working with her regular cinematographer Joshua James Richards, Zhao creates stunning images of the American wilderness, framing it as something both terrifying and awe-striking. One shot of McDormand sitting amid a giant stack of freshly-harvested potatoes shows us how small we are in the context of wider society. Another, of her in a dimly-lit bathroom with dozens of moths fluttering around, evokes a sense of industrialisation encroaching on nature.

Nomadland might recall the work of Terrence Malick and Kelly Reichardt, but Zhao is not “the next” anyone – she’s the first Chloé Zhao, and to speak of a filmmaker only in terms of what came before is to do them a disservice. Zhao’s talent for capturing the fringes of modern America without any hint of melodrama or voyeurism builds a deep trust between storyteller and subject, and it’s thrilling to see her evolve with each new project. The melancholy lyricism of Nomadland is something truly special, and this quiet marvel of a film deserves your attention.

Zhao’s filmography is two for two so far. Let’s see how this one goes.

Make that three; Zhao is one of our brightest hopes for cinema’s future.

A devastating – but hopeful – portrait of modern America.