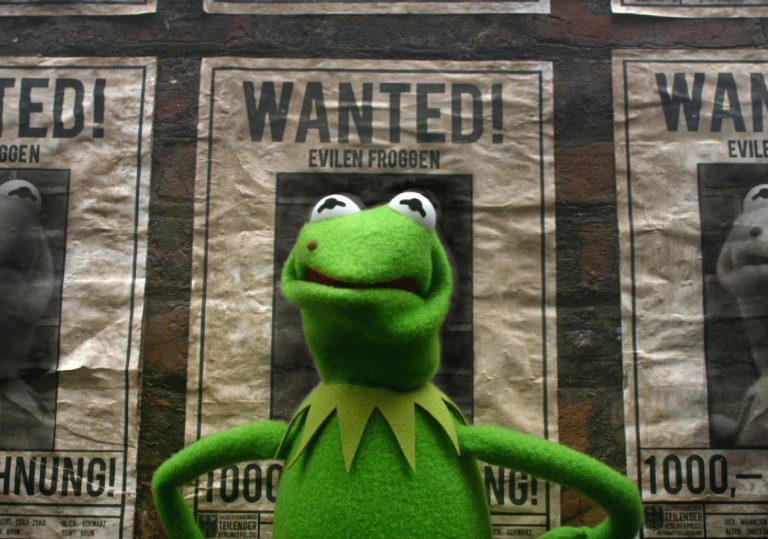 The Muppets take on the world? There’s only ever going to be one winner…

Whether you check your cynicism at the door or cling to it like a life raft, you’ll nonetheless be reduced to a strange, furry pool of lunatic happiness.

A berserker banquet of non-stop mayhem and unalloyed delight.

Scene: a bleak and blasted Siberian gulag. Tina Fey, decked out in glossy jackboots and elegantly tailored Russian guard’s uniform, belts out a brassy, smartly choreographed production number espousing the manifold joys of centralised state funding. Meanwhile, a chorus of grey-faced inmates, including Ray Liotta, Danny Trejo and the big-boned one out of Flight of the Conchords, accompany her on doo-wop harmonies. A timid but big-hearted amphibious green sock-puppet looks on.

Is there really anywhere else we could be but in a Muppet movie?

A Muppet movie. The very words spark up an inner warmth that’s part cosy fireside glow and part unsupervised firework display. As joyous, psychotic and surreal as they are, the Muppets occupy a unique position in the cultural heartland. They exist in a nightmarish burlesque DMZ that shares fuzzy-felt borders with the Dadaist anarchy of Monty Python, the broad, rootsy experimentalism of The Beatles and the acid-baked iconoclasm of the Manson Family. But with more frogs and bears.

In fact, with those credentials, it’s little wonder that Kermit and the gang fell slightly off the media map during the business-end of Reagan’s go-go ‘80s and the dotcom ‘90s. At heart, the Muppets have always traded in ‘60s-style subversion and the chazzed-up, can-do euphoria of the ’70s. Today, the hypercharged down-home banjo-wrangling of Mumford & Sons lording it over the pop charts. Weirdy-beards are ordering real ale and hand-raised pork pies in pubs. Girls are knitting on the top decks of buses and spunky little shops/restaurants/crematoriums are blinking into life on every local high street. It would appear that a collective yen for tactile, homespun delights has returned. So re-start the (folksy) music, re-light the (candle) lights and unleash the inner Muppet that has lain dormant inside you for all these long years.

Perversely, it isn’t actually difficult to imagine a world in which the Muppets never existed – It’s a Muppetful Life, if you like – but that is surely the point. It’s just as easy to imagine a world without ketchup, bubble-bath or Australia – they’re all just idle luxuries. They’re all just gifts we’ve given ourselves. But without pointless little treats like the Muppets to brighten up the dark Nietzschean corners of the abyss, man is no more than antic mud. It’s called fun, and one look out of your window will confirm that it’s a commodity that’s currently in short supply. As humanity inexorably ascends toward the vast Google-approved cloud of hive-mind statelessness that is surely its unnatural destiny, the Muppets are here to remind us to kick back, accentuate the positive vibes and make room for such insane and useless fripperies as rocket-assisted chickens, piano-playing dogs and ursine Jewish stand-ups. A pig in love with a frog? No problem. No-one’s going to judge you here.

Quite simply, Muppets Most Wanted is unnecessary fun of the purest stripe. A souped-up volley of knockout gags, bizarro cameos, breakneck energy and unchecked mayhem all constellating around a freewheeling, globetrotting road movie, Most Wanted is easily the best Muppet film since the first Muppet Movie way, way back in 1979. It is, to appropriate that original film’s sly tagline – more entertaining than humanly possible. It’s certainly the most fun you would ever hope to have in a darkened room full of children.

While 2011’s The Muppets had an abundance of charm, it was also a somewhat belaboured re-introduction of old friends to a new audience. A necessary scene-setter and an enjoyable calling card, it did its job and everyone went home happy. Now, with everyone’s baggage stowed away safely and all passports duly stamped, returning director James Bobin (a key creative alumnus of Flight of the Conchords) is free to trade on the enormous good will engendered by his first stint in charge of the menagerie, and finally let the Muppets completely off the chain.

Most Wanted picks up exactly where the previous film left off, with the closing bars of The Muppets’ climactic end-credits sing-along still ringing in our ears. But when the music fades and the lights start to dim, Kermit and friends find themselves with little else to do but stand forlornly in the street and kick their heels while the sets are dismantled, the extras go home and the studio is cleared. The gang is back together, but they’ve got nowhere left to go. 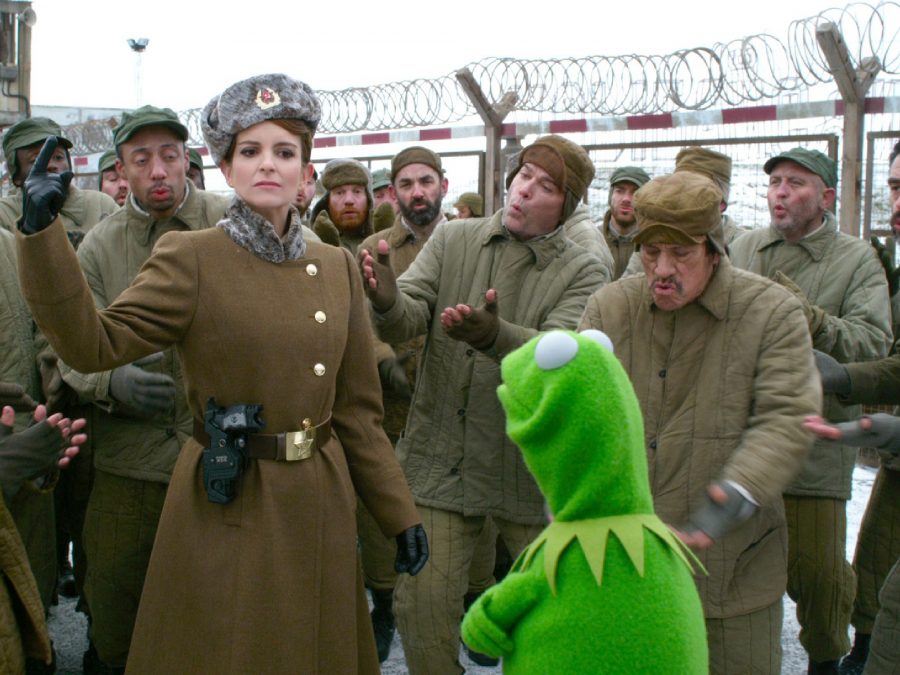 Oozing into the void comes Ricky Gervais’s suspect impresario Dominic Badguy (pronounced Bad-gee – it’s French, apparently) with an offer of a big-time world tour for which Kermit believes the Muppets are severely unprepared. Convincing himself that the show will come together on the road, Kermit reluctantly gives the green light and the Muppets head off on a purpose-built steam train. First stop, “the world capital of comedy – Berlin, Germany!” All, however, is not what it seems, as we discover when Constantine – a master thief and the world’s most dangerous frog – escapes from prison in Siberia and swiftly assumes Kermit’s identity. “Hello, my name is Kai-yearrr-ah-meet,” he announces in a gloopy Russian accent that you’ll be attempting to replicate as soon as you leave the cinema, if you aren’t already trying.

With Kermie mistakenly thrown into Tina Fey’s gulag (band name!) and the evil Constantine’s laissez-faire attitude to showbiz allowing the Muppets to indulge their every artistic whim – including Gonzo’s ‘Indoor Running of the Bulls’, Miss Piggy’s Celine Dion fixation and Animal’s super-extended prog drum solos – the Muppets appear to be coming apart at the seams. Pun intended. And when Interpol suspect them of having pulled off a series of daring heists across Europe, the gig looks certain to be up. If only friendship and mutual co-operation could somehow save the day…

Of course none of this really matters. As with all road movies, it’s the journey that counts, not the destination. Stick a pin in a map, pack a hamper and pack in the shits’n’giggles along the way. Here, the plot is consciously disregarded at every turn in favour of a sketch-based gallivant across Europe that affords unmissable opportunities for locally-sourced celebrity cameos such as Christophe Waltz dancing the waltz in Berlin and the fully-Mexican Salma Hayek hanging out with Gonzo in… Madrid.

Indeed, the Muppets treat Europe like a baby treats a nappy. Berlin is painted as a dank, cobbled Weimar ghetto, Spaniards are lazy, Brits are toffs, and the French – in the form of prissy Interpol agent called (zut alors!) Jean Pierre Napoleon – get it in the neck at every opportunity. Are the filmmakers perhaps spoofing American perceptions of Gallic life when they lampoon a caricature version of France made up of tiny electric cars, long, long lunch breaks and outdated Old World technologie? Or are they simply taking le piss?

As it rolls on, the film does tend to lose a smidgeon of its crackpot vitality, with some of the dance numbers feeling a little undernourished, the cameos becoming more and more careless (Usher as a wedding usher? Nice one!) and gags eventually taking a backseat to narrative. A shame, as the opening hour expends so much worthwhile energy reminding us that life does not necessarily conform to the peerlessly precise three-act narrative arc of, say, Toy Story, but is more usually a haphazard flurry of glorious bullshit experienced in the company of total and utter nitwits.  This is as close as Most Wanted comes to a life lesson. Kermit may tell the Muppets that they will learn something about “sharing or waiting your turn or the number three”, but they don’t. Not really. The main thing kids will take away is to at least try and notice if your best friend has been abducted and replaced with a murderous amphibian crimelord. And even then, don’t judge him too harshly.

Because deep down we’re all Muppets. We’re all freaks, three-time losers, starry-eyed delusionals, busted hucksters, gonzo idiots, nearly men, luckless outcasts or some or another permutation of one or all of those. But we’re also all part of one big dysfunctional global family now; a hot, formless, atomised mess of pokes and tweets and flashmob ennui, and the show, such as it is, must go on. Not with grit or fortitude or anything as aimless and dreary as keeping calm and carrying on, but with spangly costumes, pointless explosions, big band showtunes, bad jokes, Special Guest Stars and a porcine femme fatale.

We might not ever make our own rainbow connection, but we owe it to ourselves to have as much loud, dangerous and extravagant fun as possible along the way, because as Sigmund Freud almost put it, ‘Every normal person is, in fact, only normal on the average. His ego, in some part or other, approximates to that of a Muppet.”

The Muppets take on the world? There’s only ever going to be one winner…

Whether you check your cynicism at the door or cling to it like a life raft, you’ll nonetheless be reduced to a strange, furry pool of lunatic happiness.

A berserker banquet of non-stop mayhem and unalloyed delight.