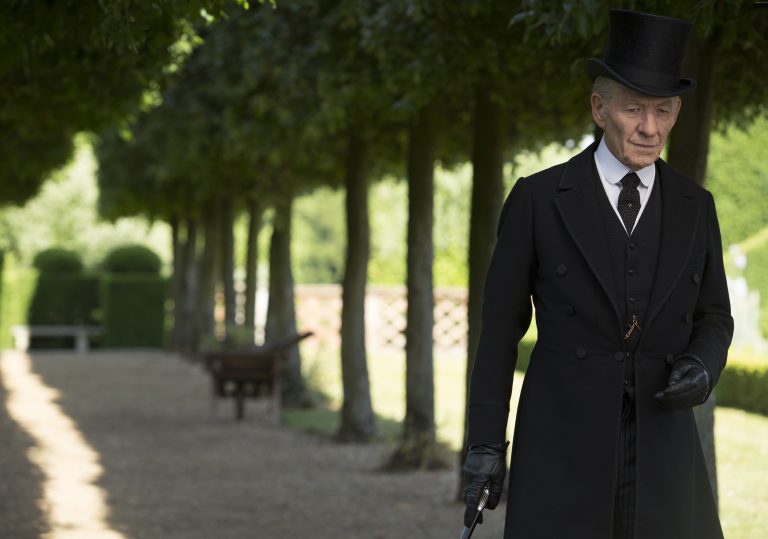 Not another Sherlock Holmes off-shoot/cash-in...

No it's not. A tender deconstruction of Holmes and of the process of crime solving.

The tragedy of the world’s greatest mind having further to fall.

When talking about Little White Lies magazine, we’re often questioned about our exotic, three-tier scoring system. It’s a gauge of feelings before, during and after the experience of watching a movie. Simple. But actually, there’s an interplay between these scores, and anticipation can often have a direct impact on enjoyment, and enjoyment can have an effect on the view in retrospect. In the case of Bill Condon’s Mr Holmes, I’m ashamed to say that my anticipation of the film was not high at all.

Recent screen and TV incarnations of Sir Arthur Conan Doyle’s calabash pipe-sucking master detective have either been irritatingly wacky (TV’s Sherlock), or revisionist in the worst possible way (Guy Ritchie’s grating CG spectaculars). And plus, festival buzz from when the film premiered at the 2015 Berlin Film Festival, gleaned via the Twitter scrolls of a hand-picked coterie of sharp critics, was not overwhelmingly positive.

It’s hard to know whether it was this very special set of circumstances are what set off the massive upswing in my enjoyment and anticipation scores for this very good film. Loving a movie which fate (and Twitter) conspired to advise you was really not good enhances matters immeasurably, as well as evoking a mild sense of self-loathing that you’d perhaps denied yourself pleasure for entirely irrational reasons.

The greatest strength of Mr Holmes is that is not actually about Sherlock Holmes. Yes, Holmes is in the film, played with expected tenderness, acuity and wit by Sir Ian McKellen, now as an ageing ex-sleuth who has ensconced himself in a Dorset farmhouse to rake over the glowing embers of his formative career as well setting the record straight as to his vaunted public persona. Among other such titbits, we discover that he never wore a Deerstalker, a detail invented by his poetically-inclined partner, Doctor Watson.

The film draws from the 2005 novel A Slight Trick of the Mind, written by Mitch Cullin, and what it achieves is something closer to the deep psychological probing afforded by lengthy prose, and it’s nearly always at the expense of the sort of daffy, overwrought problem-solving which made our hero look inhumanly brilliant. The film dismantles the Holmes legend, but not in a manner which is purely at the service of reversing the classic iconography.

No, it says, here is a fictional creation who maintains a tight mental grasp on everything and everyone. He can read people. He has cultivated a vast store of scientific and philosophical knowledge. But actually, the idea that a person could every truly know and understand another is a falsehood invented for storytelling. It places the man who knows everything on the ledge of the void of incomprehensibility and dares him to jump.

Mr Holmes is about depression. What happens after a strange case has been solved? Do those involved simply revert back to normalcy? Does the motive of a crime ever really take consideration of potentially long-gestating psychological factors? In his advanced years, with his memory on the wane, Holmes has now tasked himself with trying to comprehend the fragility of the human body and mind. His own scholarly works on the mind expanding properties of Royal Jelly and Prickly Ash are proved to be quack-work as he begins to understand the impossibility of amply indexing human behaviour.

There’s also a touching sub-plot involving his relationship with a young, fatherless boy Roger, who is being brought up by Laura Linney’s also depressed housekeeper, Mrs Munro. Holmes tends to he bees and tries to impart his skills to the wide-eyed upstart, eventually realising that even the most banal of daily actions can be ascribed to the coldly meticulous methodology of crime solving.

The film itself is very laid-back and deceptively slight. There are parallel flashback narratives which, gratifyingly, only bisect via theme. The fact that the film is concerned with the pains of becoming scatter-brained validates this more freeform, character-driven storytelling approach. Makes for a lovely double-bill with previous Condon/McKellen collaboration, Gods & Monsters.

Not another Sherlock Holmes off-shoot/cash-in...

No it's not. A tender deconstruction of Holmes and of the process of crime solving.

The tragedy of the world’s greatest mind having further to fall.