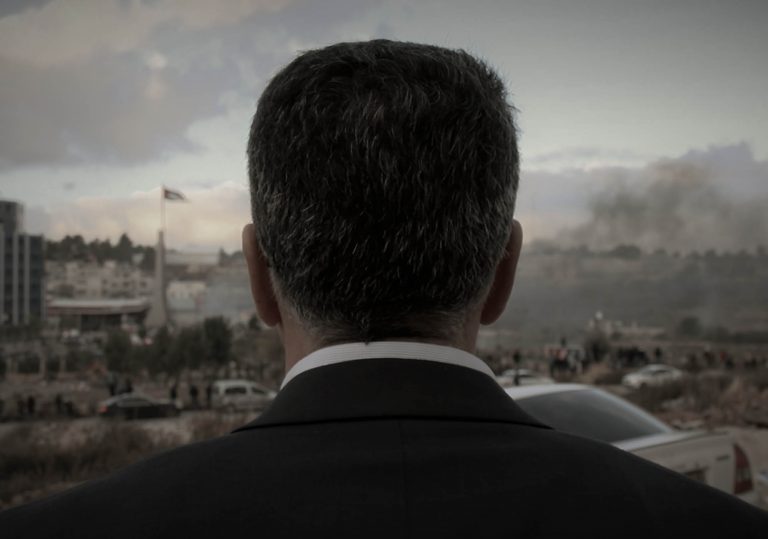 Subject sounds interesting, and plenty of buzz out of festivals over the last year.

Capable, captivating portrayal of a complex subject and situation. Great cinematography too.

Smart, yet somewhat one-sided and process-orientated portrait of a man and his municipality.

This striking portrait of the mayor or Ramallah digs into the details of governance, diplomacy and dignity.

At the start of David Osit’s Mayor, Ramallah is described as a “city in transition”. Musa Hadid, who is the city’s mayor and the film’s primary subject, is certainly always on the move. Frequently filmed from an over-the-shoulder vantage, he spends most of the film dashing in and out of meetings or darting around the city’s streets, perpetually stretched yet never remotely shaken.

Yet, as mayor of the de facto capital of Palestine, he faces a challenge that many other municipal administrators do not: he is in charge of a region under occupation. “Local governance,” Hadid says, “is the most beautiful field of work in the country”. But, as Osit’s non-fiction portrait strives to illustrate, it is far from the easiest. Throughout, the film returns to one overriding question: is it possible to effectively run a city that exists within an unrecognised state?

One aspect that a lesser director might have overlooked is the pure logistical limitations of managing a city under siege. You can’t solve sewage spills if your repair trucks are blocked at checkpoints, and you can’t build a water treatment plant if you don’t have control over construction rights. “I literally can’t deal with this shit,” Hadid says while stepping through puddles – a line that is representative of the wry, irreverent tone with which the film treats its increasingly tricky business.

Using a style reminiscent of the observational documentaries of Frederick Wiseman, Osit cleverly structures his film as a series of escalating obstacles, some of which are comical, while others are more serious. They slide from the bureaucratic and banal (as in the opening, which sees a bored-looking Hadid discussing city branding) to the outright dangerous (like the lengthy closing sequence in which the mayor dodges gunfire and tear gas as the city centre is attacked by Israeli soldiers). Each scene is beautifully observed, and they are sequenced smartly so as to convey a mounting sense of the city’s complex geopolitical conflicts and the various challenges that the citizens face.

What is a little less revelatory is the depiction of the man himself. Maybe there is no need for a critical portrait of a humble man conducting daily miracles under considerable duress, but Osit’s representation of Hadid can sometimes feel adulatory. Made by an American director, the film also has a slight preoccupation with issues relating to the US, as seen in the large portions of the film that are devoted towards Donald Trump’s decision to relocate the United States Embassy to Jerusalem.

Most insightful are the more internationally-oriented moments, such as the scene in which Hadid faces up to a panel of diplomats proposing that both Israel and Palestine are equally to blame for disagreements within the region. When asked why he won’t proffer platitudes or pose for photo-ops, Hadid remains resilient, stating that it is a matter of “dignity.” In these scenes, when his smile drops and the jokes subside, a more multifaceted sense of the man behind the municipality emerges. Behind the pressing practical concerns resides resolutely political ideals. “When it comes to dignity, I think that’s something non-negotiable.”

Mayor is available to watch now via Dogwoof.

Subject sounds interesting, and plenty of buzz out of festivals over the last year.

Capable, captivating portrayal of a complex subject and situation. Great cinematography too.

Smart, yet somewhat one-sided and process-orientated portrait of a man and his municipality.